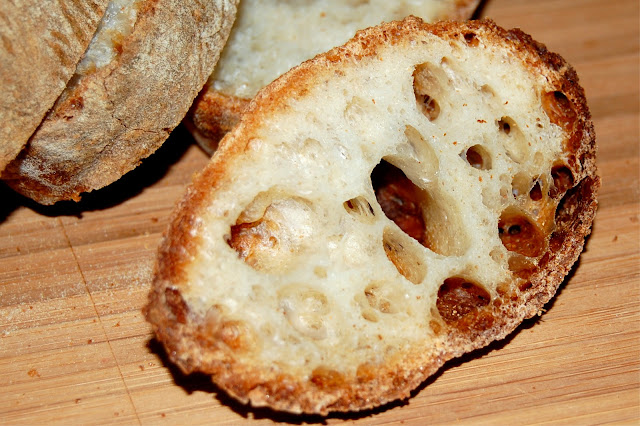 Who is Craig Ponsford, you ask?
I would ask the same question, except that I have Maggie Glezer's book, Artisan Baking, and she tells me that Craig Ponsford has a bakery in Sonoma, California. Lucky man.
And lucky us, because he was willing to give Maggie Glezer his recipe for ciabatta.

Before I start in on the bread, however, I'd like to thank Tara Snyder for listing this blog as one of the top 50 bread blogs. Although as #50, I may have been somewhat of an afterthought, I'm still honored to be in such great company. And you'll want to check out some of these blogs: the listing includes both the tried and true, and the (probably) new to you. 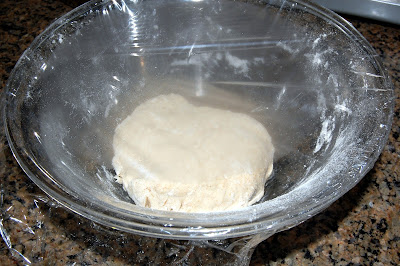 Back to bread. After I make a soft-crusted sandwich loaf, I often have a hankering for something with crispy crust and big holes. This ciabatta fills the bill.
Making this ciabatta is a two-day affair. The first day, however, takes just a few minutes. You mix four different flours (all-purpose, bread, rye, and whole wheat) with some water that's been merely kissed by yeast--the most minute amount of yeast possible. After 24 hours, this little lump of dough has tripled in size, and you're ready for Day 2. 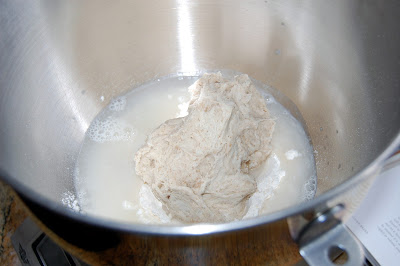 On the morning of the second day, (sounds kind of Biblical, doesn't it?), this multi-grain starter is mixed in with more flour, yeast, salt, and a lot of water. It's a wet dough, and would be difficult to handle if you tried to make it by hand. The KitchenAid is a life saver here. 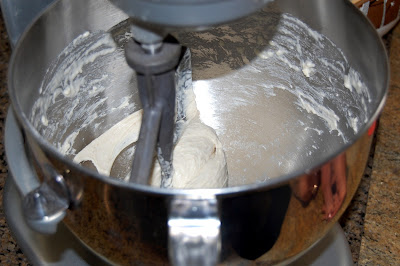 After five minutes of mixing, the dough is easier to handle, but still sticky. 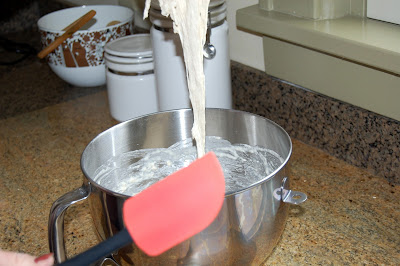 The technical term is "gloppy." 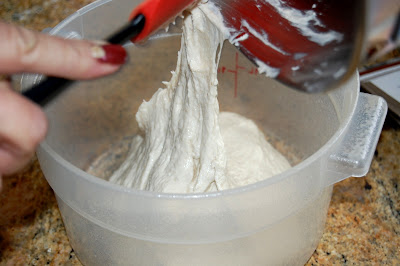 You pour this gloppy mixture into a bowl, and let it rise for about 3 hours. But don't go away. Your work is not done. 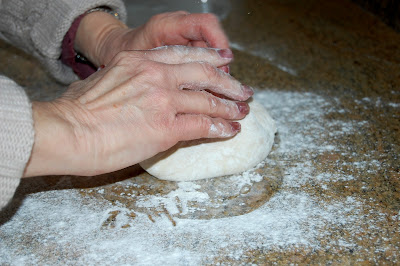 This dough requires you to turn it every 20 minutes, until it's been turned four times. Turning simply means that you turn it out on the counter, gently stretch it into a square, and fold over all four sides. After being turned four times, the dough is still soft, but considerably easier to handle. 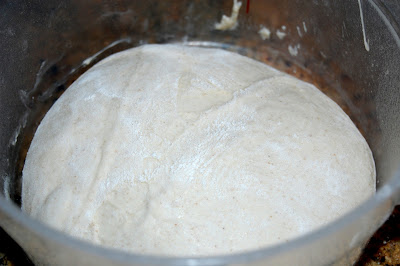 Finally, after about 3 hours, the dough is ready to be stretched once more, floured, and covered in a floured tea towel (or couche) for another 45 minutes. There are no pictures of the tea towel hiding the dough. 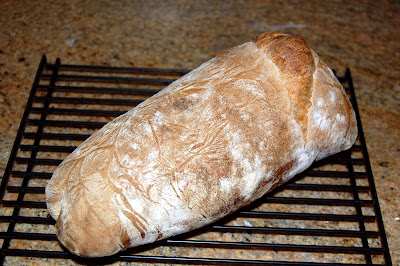 Although this bread may look misshapen, I'm actually very pleased with the way it turned out. I knew that "ciabatta" means "slipper" in Italian, and I always assumed it was a pretty satin dancing slipper. But, according to Glezer, it's meant to look like an old grandpa's slipper. I think mine definitely bears a resemblance to Grandpa's beat-up slipper, especially if Grandpa was inclined to dump flour on his slippers. No, I don't know why he would.

In order for the crispy crust and full flavor to develop, this bread needs to be completely baked, so set the timer for another five minutes after you think it's done. Then it will be perfect.

This is an excellent bread--the kind you could just keep on eating. Plain, buttered, slathered with cheese, dipped in olive oil, used to sop up spaghetti sauce--however you want to enjoy it, that's the way it's meant to be enjoyed.

The recipe in Artisan Baking makes two loaves. I made only half a recipe, which is the recipe I'm including. Obviously, it would be easy to double.

Sprinkle the yeat over the warm water, stir, and let it stand for 5 to 10 minutes. Mix the flours in a bowl. Measure 1/4 teaspoon of the yeasted water into the flour mixture. Then add the rest of the water, using warmer water in winter and cold water in the summer.
Mix by hand until the flour is absorbed. This is a very stiff biga. It's ready in about 24 hours, when it's tripled in size. It may spend the day looking like it's doing nothing, but it will expand eventually.

Combine flour, yeast and salt in bowl of stand mixer. Add the water and biga and mix the dough on low speed with paddle attachment until it forms a rough dough. Raise speed to medium and mix for another five minutes. If the dough doesn't seem wet enough (it's "gloppy"), add a little water.

Scrape the dough into a container and cover tightly. Let it ferment until about doubled in bulk, 1/2 to 3 hours. Turn the dough 4 times at 20-minute intervals; after the fourth turn, let dough rise for the rest of the 2 1/2 to 3 hours.

Flour a tea towel. Gently stretch out the dough and fold loosely into thirds, using a business-letter turn. Place seam side down on the floured cloth, sprinkle more flour on top, and cover with another towel. Proof about 45 minutes, or until the dough barely springs back when pressed.

Preheat oven to 450, putting a rack in the top third of the oven. Place a baking stone on the top rack.

Place a sheet of parchment paper on a peel. Flip the loaf onto it so it is seam side up. Carefully stretch to make the dough "vaguely rectangular." Dimple the dough all over with your fingertips. Slide bread onto the baking stone with the parchment paper. Bake for 35-45 minutes, or until very dark brown. Rotate loaf halfway through bsking.

This looks so delicious. I have been wanting to try the recipe from the bread baker's apprentice but maybe I'll do this one instead.

Your blog is my favorite bread blog by far! I found you by change through a link that someone had put in one of the comments on smitten kitchen's bread post. glad that I clicked it!

It gets better than this?

I was right. The list contains more than 20 non-bread sites with some bread sites specializing in gluten-free baking.

You're right up there.

BTW Love this bread you did too. I am partial (a sucker for) the loose big holed center with a thick crispy crust like this one.

Marie,
This ciabatta is perfection! The photo is amazing and well, I'm really glad I have the book.

Stephanie,
Thanks--how nice of you! I haven't made Peter Reinhart's version yet, but I think it's hard to go wrong making this delicious bread.

Paul,
You've tried this recipe? Amazing how much flavor those little bits and whole wheat and rye flour add.

Oriana,
This is one of my favorite bread cookbooks. Maybe eventually I'll get through every recipe in this one too.

Well, you have always been my favourite blog. I didn't need anyone to tell me it is the best.
The bread looks so good. Nice recipe!
Does it not still amaze you how many different breads can be made with the same ingredients. My pea brain is amazed by it anyway!
Happy 2011 x

Yes! I was just thinking that same thing--how many breads I've made that are basically just flour, water, yeast, and salt. How could you come up with four more boring ingredients, and yet they turn into something delicious.
It means you have an inquiring mind, not a pea brain.

woot woot marie......#50 and rising! what else to say of the bread baker to the stars?
this bread looks like something i will tackle. it's nice to see you baking more bread these days. :)

I always wondered whose slipper it was! Grampy's! It makes so much more sense to me now. That is a really nice looking loaf of bread, and would be perfect for mopping this garlicky roasted mushroom recipe I just tried from Smitten Kitchen. I've got to remember this pairing for next time. Congratulations on your blog recognition, you should be very proud, you are in with a lot of good company! I like how she said "public defender by day...", sounds like an introduction to a superhero. Have you thought about a cape?

Jini,
Yes, it's nice to have a little more time for bread, my first love. (Not counting Jim).

Chris,
Garlicky roasted mushrooms--what wouldn't be good with that?
Really, what makes you think I don't wear a super-hero cape?

That is an exceptional loaf of ciabatta!! I used to work in a small bakery in Olympia, WA, and that looks professional on so many levels, I can almost imagine it with a little pesto spread...
Thanks for sharing!!

Kendall,
Yes, it would also be wonderful with pesto spread. Now that it's gone, I'm wishing I'd made two loaves.

I've stumbled upon your blog and wow! what a fantastic blog!

Freshly Ground,
So glad you stumbled by!

Victor,
Thanks--it's always fun when things turn out the way you hope.

Great work.
Congratulations, Marie!
Thanks for sharing with us.

Hi, I'm Sare from Turkiye. I like your blog and ciabattas are great.I'll try it using your recipe. Thank u for sharing with us.

Anonymous,
Don't know--I've never had a prhttp://www.culinate.com/columns/ask_hank/baking_mats_and_parchment_paperoblem.
This scientist/baker says he uses it at 550 for pizza, and he's alive to tell the tale.

Bear in mind that not everyone can prepare their own ciabatta bread, but all of us can appreciate one that is prepared and baked the right way. Thank you for sharing your ciabatta recipe and I do hope that more readers try this out as it is one of the most healthy kinds of bread available these days and we can use a variety of toppings with it.