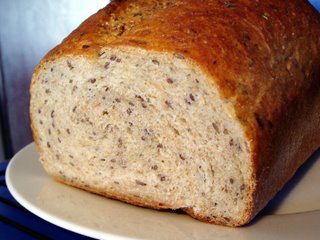 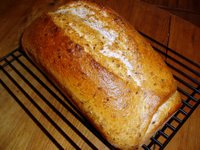 Sunday, March 26, 2006
This flaxseed bread is another one that I probably wouldn't have chosen to make if I hadn't decided to work my way through the whole book--it sounds--well, it sounds too healthy. My vegan friends are always sprinkling flaxseed over everything.
Olive bread--now that sounds sexy; flaxseed loaf just sounds virtuous. But, at least in the case of breads, virtue is its own reward. This is a very rewarding bread.
After deciding that I'd better not grind the flaxseed in Jim's coffee grinder, I decided I'd just use the food processor. I figured it wouldn't be perfect, but it would at least be easy. But nothing happened when I pressed "on." Some little piece of plastic had broken off after the workout with the olive bread, and apparently that piece of plastic was the equivalent of a vital organ. So I got out the old mortar and pestle, and cracked the flaxseed. This tedious chore also made me a little biased toward the flaxseed. Everything just went swimmingly after that. It's one of the fastest breads I've made so far; no sponge or biga is necessary, and it needs no coaxing to rise. It's also delicious, which I didn't expect. It's hearty, all right, but flavorful and with a little bit of crunch. How can so many breads be the best bread I've ever eaten?
By the way, I think I finally got the knack of slashing the bread. I ordered a special French bread slashing knife because I was dissatisfied with my slashing technique. (See picture of Levy's Jewish rye bread--an otherwise wonderful bread with inadequate slashes. In breadmaking, as in life, timidity is rarely the best technique).
I also ordered a new food processor. After reading the reviews, I decided to try a KitchenAid KFP760. The white one was $229.99, and the black one was $179.99. Black is beautiful.
Posted by Marie at 5:45 PM 5 comments:

Saturday, March 25, 2006
One of my favorite bakeries is Turtle Bread Bakery
http://www.turtlebread.com, and one of their best breads is olive bread. Never did I think that I would be able to bake a bread that equals theirs, but I think I did. I made my first biga for this bread (never mind what it is--if you bake, you probably already know, and if you don't, you won't care), but, although I was a little apprehensive about the biga, there was no need to be. 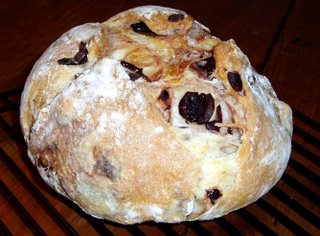 This bread is simplicity itself: other than the olives, it has only all-purpose flour, yeast, water, and salt. With LaCloche bread baker, the crust was as crispy as you can get in a regular oven, and the body of the bread is tender and delicious. It's embarrassing how close Jim and I came to finishing this bread in one sitting.
Posted by Marie at 7:25 PM 3 comments: 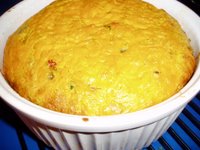 I was very excited to make my first bread using my brand new MyWeigh scale. At last I could have precision measurement! (Have I ever used the word "obsessive" in connection with this project?). I looked through the box for the directions, and finally found a piece of paper about the size of a business card. Directions: "Turn power on. Weigh." This is akin to The Bread Bible having a recipe that would say: "Mix ingredients. Knead. Let rise. Bake." I need more direction than that. So I'm not totally sure that I got precision measurements, especially since I'm not so sure I got the "Tare" function right. Next time, I'll measure first and then weigh. The scale will be my second opinion.
Even without total precision, the bread was great. Really, how could it go wrong--it's got butter, garlic, onion, roasted red pepper, jalapeno, cilantro, cheese, and corn, in addition to cream, cornmeal, flour, and eggs. It's baked in a souffle pan, and looks puffy and golden and delicious--good enough that it caused me to violate my "no seconds" rule. I also fed some to Sarah, who is a more effusively appreciative audience than Jim is, and I was able to send the rest of it home with her. Let her worry about the excess ten pounds!
Posted by Marie at 8:05 PM 4 comments: 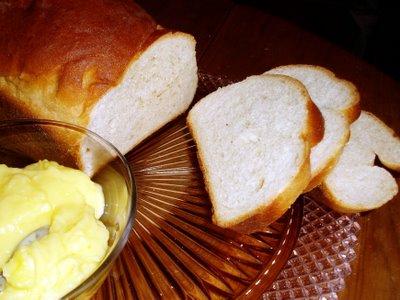 I had my doubts about this banana bread that isn't really a banana bread. It's a yeast bread with only one banana in it, so there's just a hint of banana. As Sarah said, "This bread is amazing! It's so light and the crust is so crisp....it makes me happy to eat it!" And the lemon curd that Rose suggests as an accompaniment is an inspired idea.
This is one reason that I'm happy that I decided to make every bread in the book. If I hadn't made myself that promise, I'm sure I would have passed this recipe by because why would I want a white bread with a little banana in it? But the reason I'd want it is that it's very, very good.
I got the Baker's Catalogue today, and I made a quick once-through, circling about $500 worth of baking items that I must have. I will narrow that down soon.
Posted by Marie at 7:21 PM 5 comments: 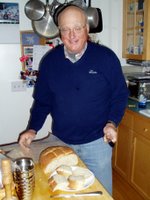 A few days ago, I was talking to my neighbor Fred about my bread-baking project. He was completely uninterested, until it occurred to him to ask me if I could bake a nice crusty caraway rye bread. I said I didn't know if Rose had caraway rye as one of her 83 breads, but if she did, I'd be baking it sometime this year. He said if I baked some he'd be my friend forever and would do anything I ever asked him to do. (Or something like that). Well, naturally, I went home and checked the index. I found this Jewish rye bread with two tablespoons of caraway seed. So I baked it for Fred. It was crusty and chewy and absolutely delicious. This was the first time I used my new La Cloche bread baker--it's a heavy round stone pan and dome; when you use it, you get a good crust without going the ice cube and water spray route. In fact, I've had a whole serious of successes lately, which is making me a little nervous. I remember the rosemary foccaccia, and I think it must be about time for another disaster. I'm also realizing that I have to pick up the pace. The first quarter of 2006 is almost over. If I'm to stay on track, I should have baked 21 different breads by the end of March. Counting today's caraway rye, I have only 14 different varieties. That means I have 13 days to bake 7 loaves. The pressure is intense. Coming at the same time as the NCAA tournament, it's almost more than a body can bear. 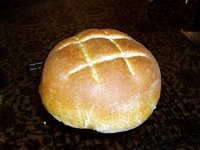 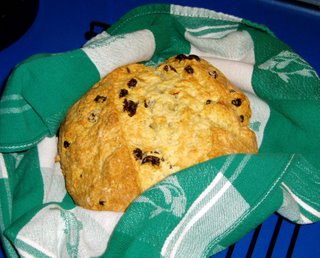 March 17, 2006
It's St. Patrick's Day, so of course the bread du jour is Irish Soda Bread. This particular bread is Royal Irish. I don't know how it's different than peasant Irish bread, but I highly recommend it. First, it's fast. Second, it's easy. Third, it's tasty. Fourth, it's got whiskey-steeped raisins in it. (This is probably related to #3). You can serve it with Irish Whiskey butter if you want to, and you should.
Posted by Marie at 9:48 PM 1 comment: 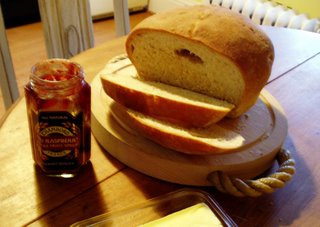 March in Minnesota is a lot plainer and colder than March in St. John. But never mind, I can turn the oven on without sweltering, and I can get back in the rhythm of baking bread, whipping up a loaf of your basic free-form hearth bread. As you can see, the bread has a big hole in it. So it's not perfect! It's still a damn fine loaf of bread, perfect to nibble on while watching the first episode of the sixth season of The Sopranos.
Posted by Marie at 7:43 PM 1 comment: 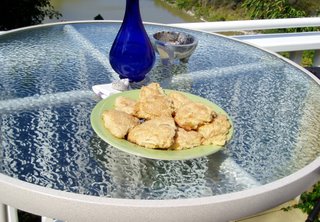 We spent last week in St. John, U.S. Virgin Islands. It was gorgeous and sunny, but this is the cooking channel, not the travel channel.
I didn't want to miss a week of baking, but our cooking facilities were limited. I decided I could make a quick bread if I brought all the ingredients, so I brought everything, including candied ginger, for these scones. It was still kind of a trick to bake them because the oven in our cottage was tiny, and there were no baking sheets or mixing bowls. But they still turned out OK. In fact, it is pretty close to paradise to sit on a porch with a view of the Caribbean eating freshly baked scones. Our friendly pearly-eyed thrasher ate the scone crumbs, and then came back every other morning looking for more handouts. 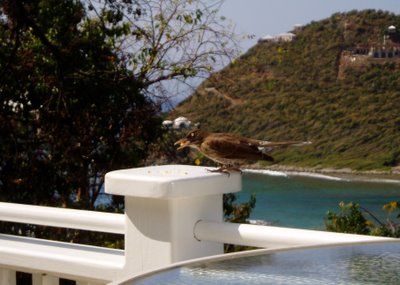