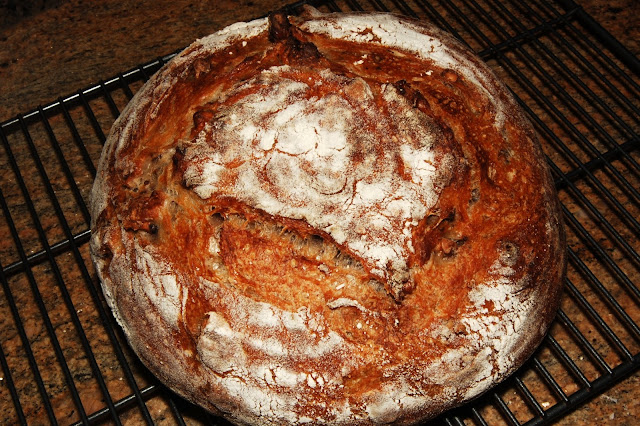 This is my favorite Tartine bread so far, and, even though it requires the extra step of toasting the walnuts (and I added the step of scrubbing off the bitter walnut skins), it seemed the easiest.  First, I finally decided to cut the recipe in half.  Although it's still a lot of time invested for one loaf of bread, it's also easier not to bake one loaf, clean the pan, and bake another.  Second, I simplified the process by making my own abbreviated list of steps:

I'd read through the walnut bread recipe once, and was actually able to make the bread by referring only to this list.  The only thing I couldn't remember was the oven temp, so I had to check that.  Otherwise, I just went by memory.  I forgot that the water was supposed to be heated to 80 degrees, and I also forgot how long the bread was supposed to bake with and without the lid (but I checked that when I checked the oven temp, so I guess I forgot two things, but I only had to check one time). 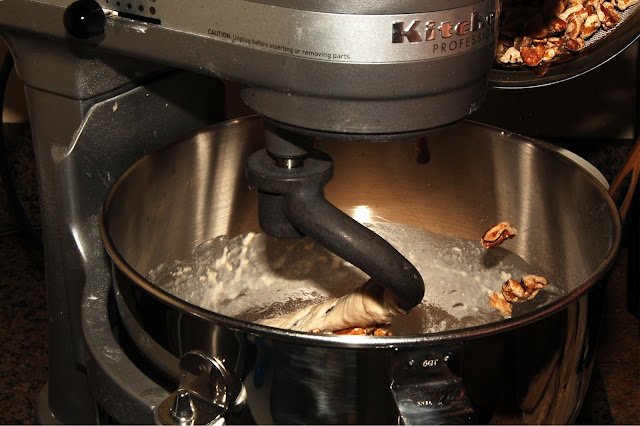 I've also decided to use my KitchenAid with its dough hook instead of mixing the dough by hand, as Robertson tells you to do.  Yeah, I know that if I were a true bread baker, I'd want to touch the dough, but I get enough touching by turning it every half hour.  (This time I turned it every half hour for between 4 and 5 hours, instead of the bare minimum 3 that Robertson instructs.  I think that's the main reason that I was almost completely satisfied with this version). 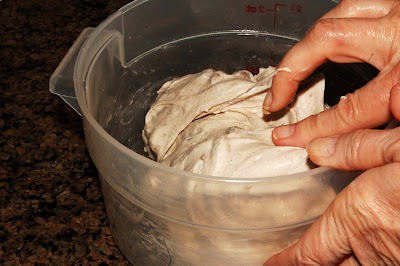 See?  I'm touching it like crazy.  It actually is very satisfying tactilely:  soft and smooth as the proverbial baby's bottom. 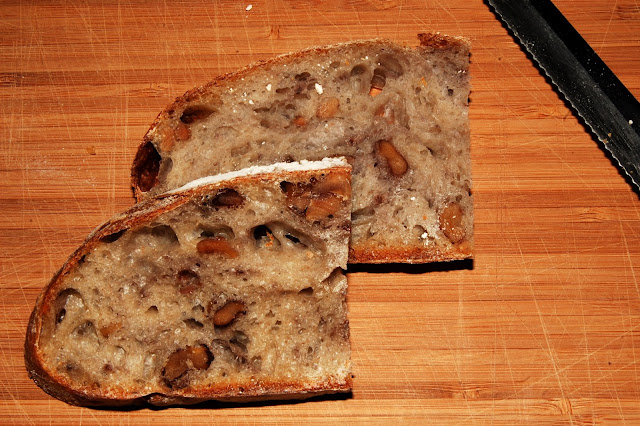 Bread that doesn't get done until dinnertime becomes dinner.  With sliced apples and pears, cheese, and walnuts in the bread, it's a pretty completely meal, although high in fat, I suppose.  But I'm pretty sure that the same people who are now telling us that coffee and wine are healthy are also sanguine about "good fat," which would include walnuts (although not cheese, I guess).  But maybe that message will come next year.  Oh, and by the way, if the people who announce that cheese is good for you would also mention that the best weight for someone past their prime is about 20 pounds more than when they were 18, I'd be pretty happy. 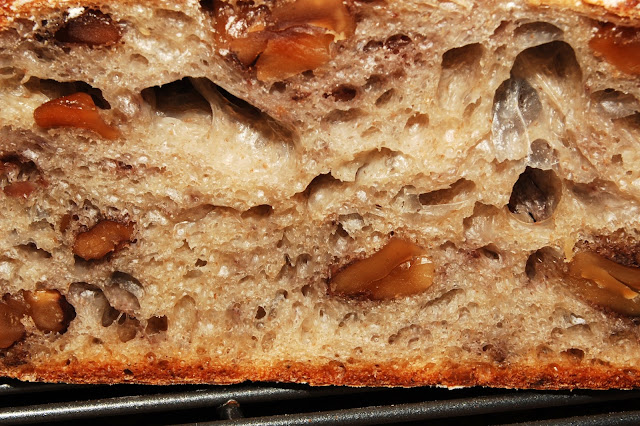 This is the last Breadbasketcase post I'll do for a while--maybe forever, depending on whether this break turns out to be just a hiatus or the end of this blog.  I've been doing this since December 25, 2005, my first post, so it's been just over 7 years.  I don't even want to count how many loaves of bread I've made, but it's been a lot.

More important than the bread I've made are the people I've met (or at least we've met in cyberspace, if not in the real world), including the wonderful Rose Levy Beranbaum herself.   I'll also miss working with my ace photographer, who has gone through at least three cameras in the course of Breadbasketcase.  We'll have to come up with another joint project, like sailing the world.

I have no interest in giving up on bread, but I find myself wanting to return to bread I've made before, and wanting to devise my own recipes.  I've tried not to repeat recipes on this blog, although I know there have been a few that I've made again without even remembering that I'd made them before.  And trying to perfect a new recipe is probably not something that would make for entertaining reading.  But if I ever do come up with the best bread I've made, you'll read about it here.