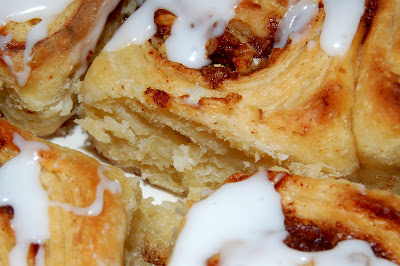 This is the 15th year we've invited people in our neighborhood to casual coffee-and-doughnut hours on Saturday mornings in January. We have pots of coffee, juices for the little ones, and platters of doughnuts. I usually make something homemade in addition to the doughnuts, and last Saturday it was these cinnamon rolls, courtesy of King Arthur's web site. 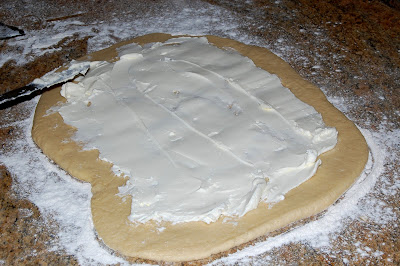 The cream cheese isn't added to the dough, and it's not in the frosting. Instead, it's layered on the rolled-out dough (letting it soften at room temperature for at least two hours is an excellent idea). 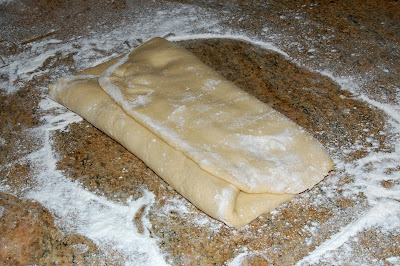 Then it's folded, business-letter style, and rolled out again. This process is repeated again until the cream cheese is more or less absorbed into the dough. (I thought it could have used another turn because I could still see a layer of cream cheese, but I was afraid it would toughen the dough). 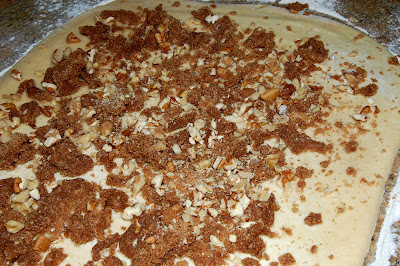 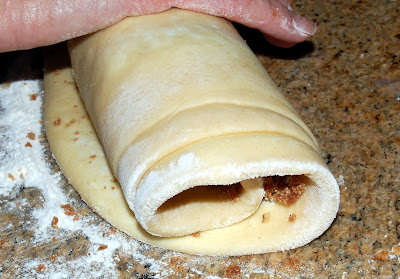 The recipe is supposed to make nine rolls, which you place in a 9" x 9" baking dish. I put nine in an 8" x 10" pan, which, if my math skills are at all accurate, is almost exactly the same area. I don't think it gave them enough room to expand properly because they looked a little squinched when they came out of the oven. 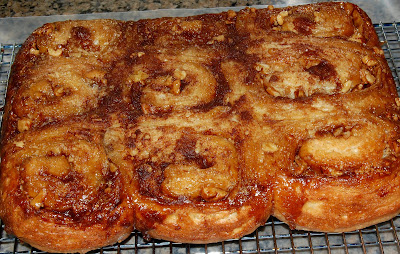 I still had three left over, and I put those in a little round casserole. 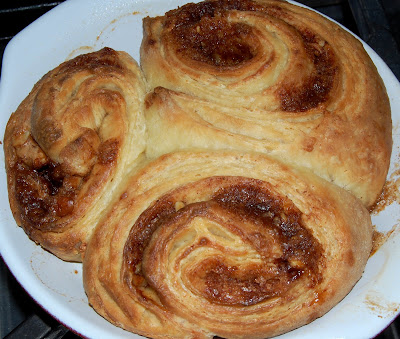 A basic powdered sugar/milk glaze is not really very exciting, but it added just the right touch of sweetness. Despite all the brown sugar in the filling, the rolls were not very sweet, and needed just a touch of the frosting that can sometimes be cloyingly sweet. Just a drizzle is enough. 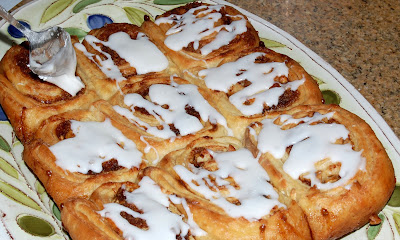 The rolls were still just the slightest bit doughy in the middle, meaning they should have either had more room to spread or I could have baked them just two minutes more. The most heavenly part about these rolls is the crusty corners, which are flaky and tender at the same time. With the nuts, extravagant amounts of butter and cream cheese, and brown sugar, these are like the best parts of both sticky buns and cinnamon buns, rolled (literally) into one delicious treat. And the nice thing is that you can make them at night and simply take them out of the refrigerator, let them warm up a bit, and bake them in the morning. When guests open your front door, they'll be hit with the welcoming scent of cinnamon rolls. They'll be your slaves.
Posted by Marie at 8:04 PM 11 comments: 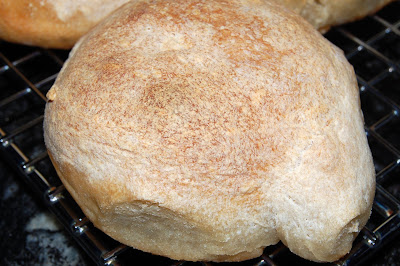 I've started watching America's Test Kitchen, and I'm fascinated by its best-recipe, try-it-again approach to cooking. It's fascinating to me because it's the opposite of the way I cook. Once I finish a recipe, I don't think about how to make it better; I think about what I'm going to try next. This is pretty obviously not the superior method since it means I never perfect anything. But I do get a lot of variety.

Because I was assigned the salad course (more on that later) for our annual progressive New Year's Eve party, I wanted to make a bread or roll that would be a good accompaniment. I'd seen one of the cooks on ATK work her little heart out on these rolls, so I figured they'd be just the thing. I also liked that they were made with a wet dough that, unlike Norm's Onion Rolls, would not burn out the motor of my new KitchenAid. 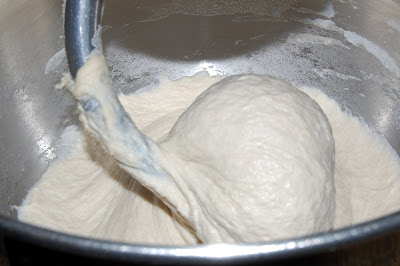 The rolls, titled Rustic Dinner Rolls, are pretty straightforward, although they do have some typical ATK quirks, born of their obsessive testing and re-testing.

For example: 3 tablespoons of whole wheat flour, no more no less. This is supposedly just the right amount to get a "nice earthiness." If I were an obsessive tester myself, I'd try again with no WW flour and once again with a half-cup.  They had a good flavor, though, so maybe there's no point to further experimentation. 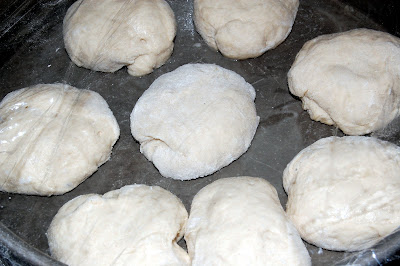 The biggest quirk of this roll recipe is starting them out in round cake pans, so they grow together in their first ten minutes of baking. 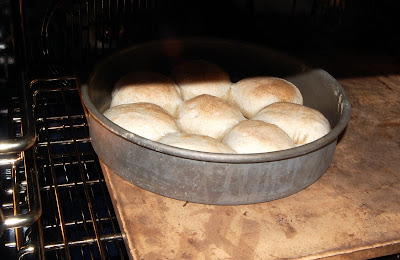 Then, lightly browned, they come out of the oven and get turned over on a baking sheet, until they're cook enough to be separated. This initial baking is done at 500 degrees, to increase the amount of oven spring.  Then another 10-15 minutes at 400 degrees. 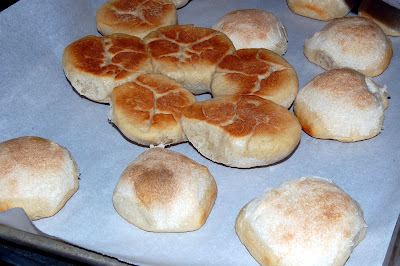 To my surprise, because of the trust I place in ATK, mine didn't spring very high. They actually look a lot like the photo that shows what happenes to a roll when you don't give it that burst of intense heat: they're flat and hockey-pucky, not tall and springy. In ATK's defense, I think this may have happened because I ran out of bread flour after measuring out about a third of the flour. (How does it happen that a bread blogger runs out of bread flour?) 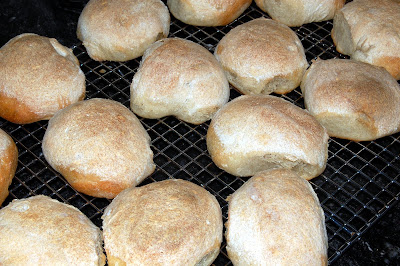 Because these rolls were almost perfect, I'll admit that I'd kind of like to try them again, using all bread flour this time. But I already have a full list of breads to try for the first time, so I don't know when, if ever, I'll return to the rustic dinner rolls made with three tablespoons of whole wheat flour.

Some readers, who have been reading this blog for years (people, don't you have anything better to do with your time?), may remember that our New Year's Eve tradition is to have a neighborhood progressive dinner. When Jim remembers, he photographs the courses. I think he's only remembered once.

This dinner started out at the Niemiecs' house for appetizers. Appetizers are my downfall (I probably should say one if my many downfalls). I love having a little savory bite, or, let's face it, a lot of largish savory bites. Joan made a platter of crisp vegetables, 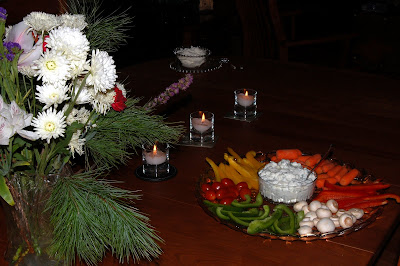 smoked salmon with onions and capers, 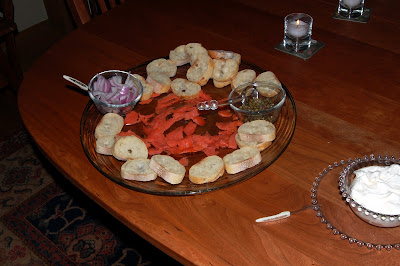 Then we moved to the soup house, which belongs to the Beiers. Master soup-maker Betty B. made leek and mushroom soup topped with brie toasts. 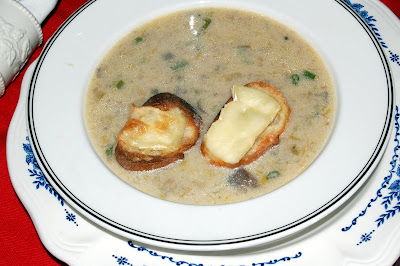 The third course was at our house. In addition to the rustic rolls, I made a fennel, watercress, and blood orange salad with champagne vinaigrette. 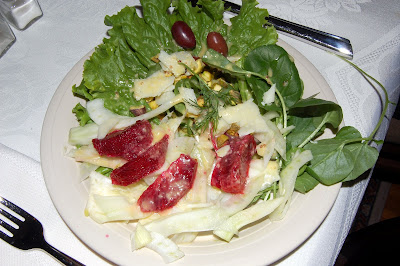 The piece-de-resistance was Beef Wellington, by Laurel Deloria, who has never found a recipe she's afraid to tackle. She was also not afraid to tackle a Madeira sauce (delicious). 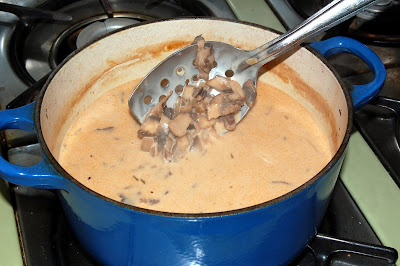 The Papanicolaous thoughtfully provided bowls of beautiful vegetables, so that we could delude ourselves into thinking we were eating healthily. (There was also an unpictured bowl of green beans). 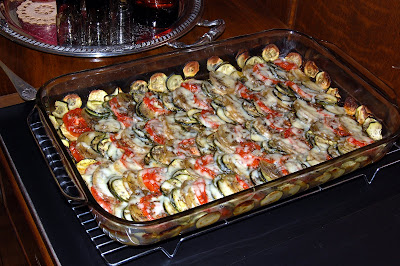 Jim got a new timer for his camera so that he could take a picture of the whole group, including himself. However, he neglected to read the directions, and he never did get it to work, so he finally gave up and took a picture of everyone but Jim. 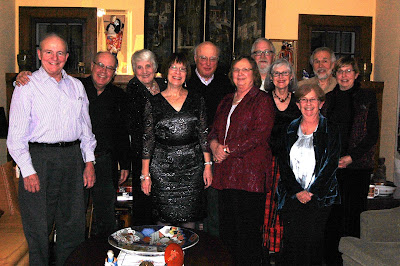 Unfortunately, he was so flummoxed by this photography failure that he completely forgot to take a picture of the dessert prepared by Doug Logeland: lemon tart with chocolate crust.  Too bad, because it was a memorable finale to a great dinner.