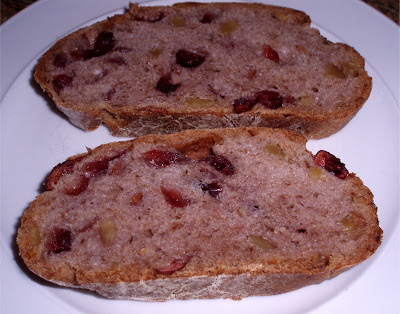 I wasn't planning to bake anything this weekend because my daughter Sarah and I are going to Paris for a week on Tuesday, and I had 28 things on my list of things to do this weekend. Not one of them was baking bread. But then I thought that I remembered Rose writing about a bread she'd baked so she'd have something good to eat on a flight, and I thought that if there was a bread that was flight-worthy, Rose would certainly know about it.
When I went back and read about it again, I realized there was no way I could compete with her organization. She baked the bread, gilded it lightly with mayonnaise, and made lovely chicken sandwiches. Brownies for dessert. Naturally, she not only baked the bread and the brownies, but probably made the mayonnaise and roasted the chicken. Maybe she went out and killed the chicken, too, for all I know. I didn't do all that, but I did bake a fabulous loaf of bread. If I made this bread before every flight I took, I'd feel a lot friendlier toward Northwest Airlines.
This is not a difficult bread to make, but the directions are lengthy, even by Rose's standards, and there are a lot of steps. Last night, while Jim and I were watching Episodes 1 and 2 from the first season of Mad Men (watch it and you'll see why everyone is crazy about this series!), I roasted the walnuts, soaked the cranberries, mixed about a quarter of the walnuts and two kinds of flour in the food processor, and made a sponge with the same two flours (bread and whole wheat), the water the cranberries had soaked in, some barley malt syrup, and some sourdough starter. Amazingly, I had everything on hand. Even the barley malt syrup. 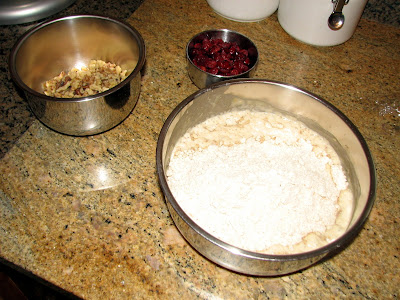 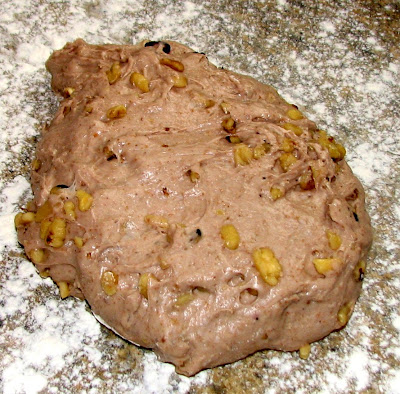 It's so shiny and rich it almost looks like chocolate ice cream (inexplicably resting on a floured counter).
This dough gets shaped into a rectangle and spread with cranberries, 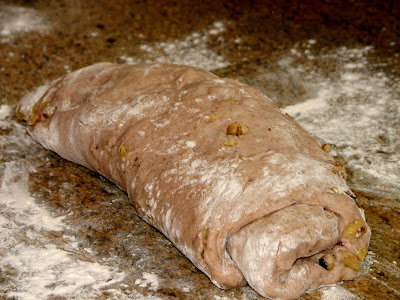 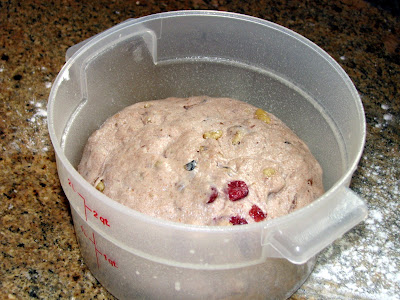 After two risings, the dough is shaped into a torpedo, and put into a makeshift couche--this is a stiff linen towel sent to me all the way from England from my blogging buddy Melinda. I closed it with a clothespin, and let it rise again. 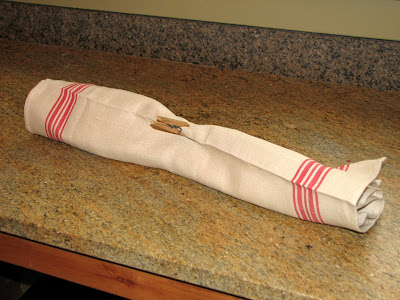 I think this must be Rose's only bread that is not baked on a baking stone. I happened to read this warning just as I was about to put the baking stone into the oven. By the bye, my theory has always been that if you can read, you can cook. I think that I've forgotten to read some critical direction in my last three or four baking forays, and I've found that the other side of the coin is that if you can't read, you can't cook. I don't think that I screwed this recipe up, for a change. 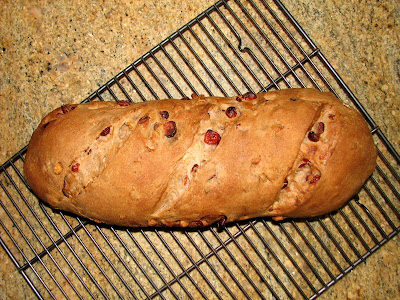 No baking stone because the cranberry water has sugar and and the malt syrup also has sugar, both of which make the bread vulnerable to burning. You further protect it by draping aluminum foil over the bread after it's baked about 20 minutes.
I sliced two pieces for each of us and we were both faced with the butter-or-no-butter dilemma. Jim opted for none, and swore that it needed none (although he spread some on, none too thinly, on his next piece and didn't seem unhappy), but I volunteered to taste-test it with butter added. (In the spirit of The Mad Men--set in the day when food and drink had not yet turned into our enemies). This bread is so tasty that it doesn't need butter. But it's not harmed by it either. I highly recommend this bread, although you might want to try it on a weekend where you to-do list is not quite so daunting. Or you might want to ignore your to-do list, and just bake the bread. 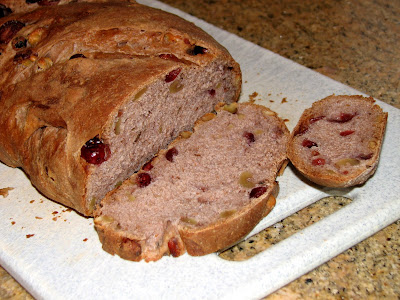