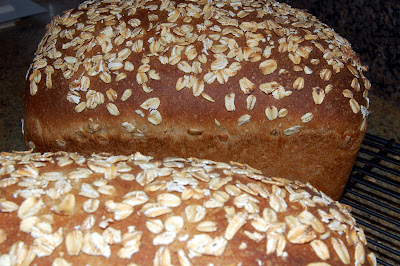 I saw a handsome loaf of oatmeal bread at Sun Street Breads, one of the best bakeries in Minnneapolis. I almost bought a loaf, and then I remembered that I was supposed to be a bread baker, and I hadn't baked a loaf of bread in a long time. I had some buttermilk, left over from another project, in the refrigerator, so I decided it would be an oatmeal buttermilk bread.

A nice thing about baking yeast bread with buttermilk is that you can just substitute it ounce-for-ounce for milk, and you'll get a similar, but slightly tangier, result. (Things are trickier when you try to substitute it for milk in a quick bread--you have to decrease the baking powder and increase (or add) baking soda). 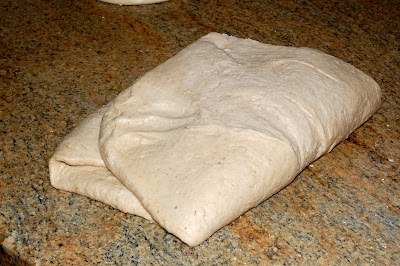 As I was making this bread, and marveling over how the oatmeal changed from big rough flakes to a porridge-like consistency after just a brief soak in water, I wondered why I'd never made oatmeal before. But the search function on my blog showed me that I had--twice, in fact.

The first time I made it, back in 2007, I was inspired by Rose's mention of Jeffrey Hamelman's oatmeal bread, which she made for her father. I couldn't find Hamelman's recipe, so I made a different version, which gave me no end of trouble. I ended up with a sadly misshapen loaf, and complained bitterly about the ends, which looked like, I said, giant belly buttons. Then, a few months later, I made a different version that Rose had on her blog--one with honey and flaxseed. I was pleased with that one. 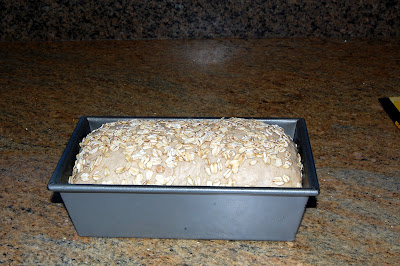 Now, five years later, I own the Jeffrey Hamelman book, Bread, that has the recipe Rose used for her father's birthday, and which inspired me in the first place. The up side of having an increasingly faulty memory is that so many things come as surprises! If I'd remembered this whole series of events when I first got Hamelman's book, I probably would have just made the oatmeal bread then (without buttermilk, since his recipe calls for sweet milk), and I wouldn't have been so delighted to find out that I'd finally made the bread I was trying to make way back when. Now I'm not only happy with the bread, I'm happy to discover that it's apparently been on my to-do list for five years. 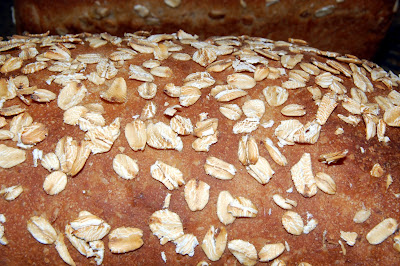 I can see why Rose's father liked this bread so much. It's very likeable. Excellent as a sandwich bread, it really shines as toast. So much so that my groan when my alarm clock goes off at 6:00 soon turned to a smile, and I jumped out of bed: toast for breakfast! Yay!

Place the oats in a mixing bowl. Add the water, and let stand for 15 or 20 minutes to soften. Add all the remaining ingredients to the bowl. Using a dough hook, mix on low speed for 3 minutes until thoroughly mixed. Turn the mixer to medium-low and mix for another 3 to 5 minutes.

Let rise for one hour. Fold the dough once during this rising, using a letter-style fold.

Divide the dough in half and shape into loaf pans. Brush the tops of the bread lightly with water, and press oatmeal gently onto the tops of the loaves. Cover the loaves, and let rise for another 1 to 1 1/2 hours.

Preheat oven to 450 degrees, using a pizza stone if possible, and preheating the stone as well. Put 1/2 cup ice cubes on a preheated tray or pan in the oven, and put the loaves on the stone (or on the oven rack). After 15 minutes, lower the temperature to 400 degrees. Bake 30 to 40 minutes.
Posted by Marie at 12:44 PM 16 comments: