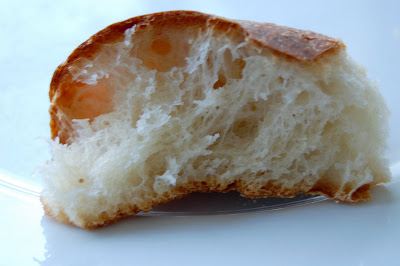 This is the kind of bread that makes you feel amazed that you actually baked it yourself--when you smell it baking, when you break it open and see its lovely texture, and, most of all, when you taste it. Of course, it is a three-day bread, so there should be some payoff. 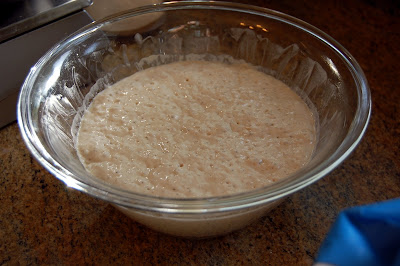 Day 1 is simply making the sponge: a matter of mixing flour, water, and a small amount of yeast, and ignoring it until it's nice and bubbly. Then it can be refrigerated until it's ready to play its part in Day 2. 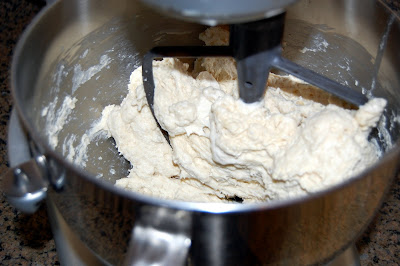 On the second day, two cups of the sponge is mixed in with more bread flour, a little sugar, water, olive oil, salt, and a bit more yeast. The dough is so wet that it must be mixed with the paddle attachment first--until it comes together enough that you can use the dough hook. 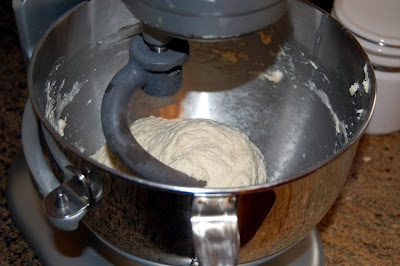 The dough hook goes to town for at least eight minutes. It would take a long time if you did it by hand, and the dough is so wet and sticky that I'm not sure you could do it successfully. 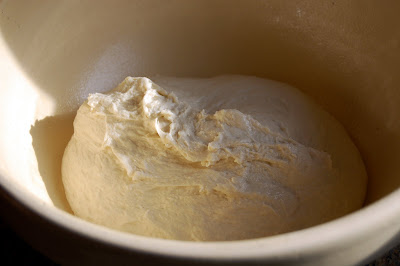 After about three hours, the dough becomes very soft and billowy, and you do get to roll it around in flour by hand, which is nice because it has such a good feel. 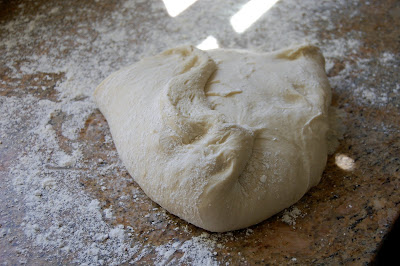 Another rising time, although this one's only about an hour. We have about four hours of rising time so far, and we're well into Day 2. It doesn't look like this bread is going to be on the menu for dinner. 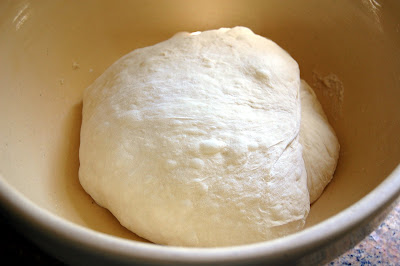 After just about an hour, it's puffy and bubbly--ready to shape into eight small loaves. In my mind, I had envisioned these as about the size of dinner rolls--they're described as "wedges," but they're much bigger. There are little loaves of bread all over the house. 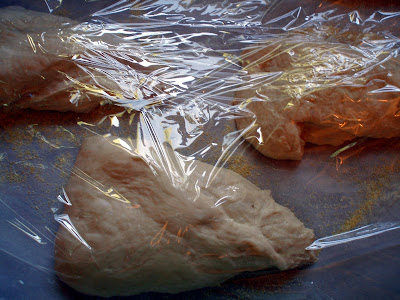 All these loaves have to proof for another two hours or so. Then they're supposed to go in the refrigerator overnight. I was going to skip that step, but as it happened I had a meeting to go to, so I ended up making room in the refrigerator for eight large--and getting larger by the hour--wedges of bread dough.
On Day 3, however, I had nothing to do but take the pans out of the refrigerator, let them come to room temperature, and bake them. The directions said to bake the loaves for five minutes at 475, and then for another 20 minutes at 425. I did 450 and 400 in my convection oven, and the first batch still got very, very brown. (I couldn't fit all eight loaves on my baking stone, so I had to bake them in two batches). 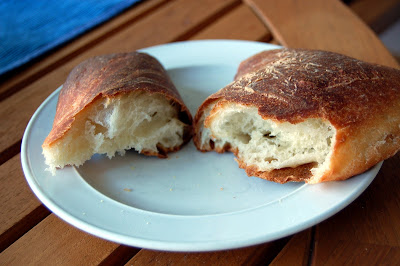 You're supposed to sprinkle powdered sugar lightly on top of the loaves, but I omitted the sugar for the loaves I made for dinner. On a second go-round, I'm not sure I'd put powdered sugar on any of them. Even without the sugar on top, they're sweet enough to have as a breakfast treat with butter and jam, yet not so sweet that you can't have them for dinner. The powdered sugar topping is attractive at first, but it melts by the next day. Having sugar on top makes the rolls much less versatile as well. 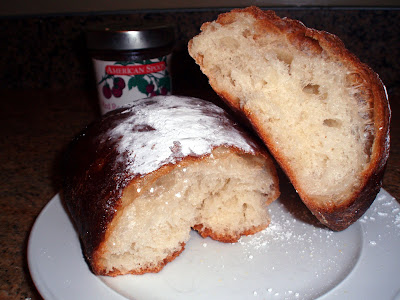 This "Sweet Rustic Bread" is one of the master recipes from Peter Reinhart's Crust and Crumb: Master Formulas for Serious Brad Bakers. It's one of his earlier books--published in 1998, three years before The Bread Baker's Apprentice. These formulas are long, so instead of typing the recipe, I'll just link to it.

You can find this recipe at a link to google books
Posted by Marie at 4:20 PM 14 comments: 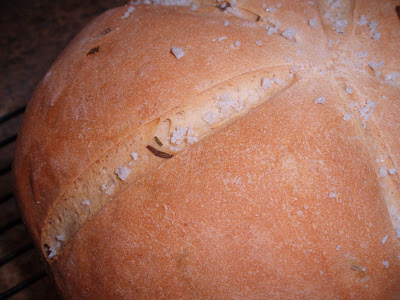 I have a pot of rosemary growing just outside my back door, so when I saw this recipe, while browsing through one of my favorite bread cookbooks, I wanted to give it a try--especially when I saw how easy it was. In the dog days of summer, I just didn't have the energy for a full-on, two-day, complicated recipe.
Mixing milk and oil--that's about as difficult as it gets. 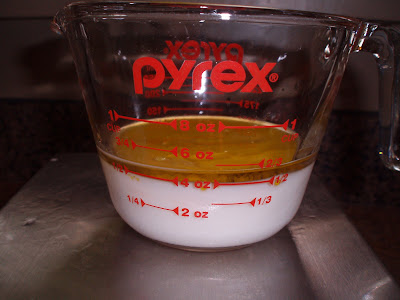 Well, that and chopping up the rosemary. 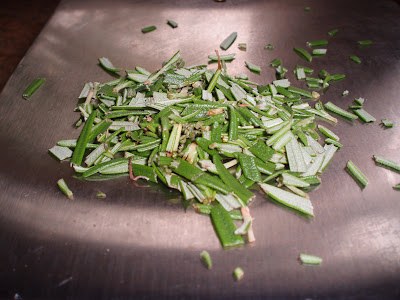 The dough comes together very nicely. 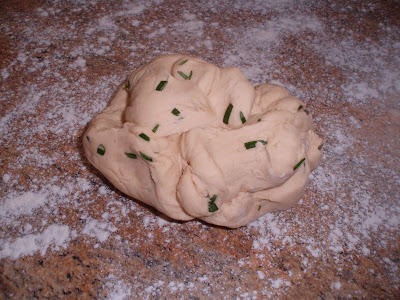 And shapes into a free-form boule quite easily. 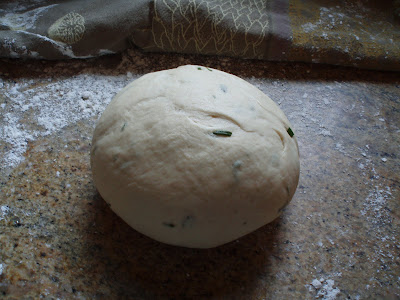 Apart from the rosemary, what intrigued me about this loaf was its alleged sparkliness. The inventor of this bread, a baker named Luciano Pancalde, supposedly read a biography of the d'Este family, which told about a fabulous banquet where a rosemary bread encrusted with diamonds was served. I see some problems with this story, not least of which is the damage that eating diamond bread would do to your teeth. Luciano decided that his bread would have sea salt crystals on top and that they would "sparkle like diamonds" at a fraction of the cost. (Sea salt may be expensive, but not if you compare it to diamonds). Actually, I think that will be my new standard for deciding if something is too expensive for me to buy. I'll just ask one question: "cheaper than diamonds?" If yes, there's no reason to deprive myself.
As for the bread, I didn't really think the sea salt was going to convince anyone that I'd made diamond bread. 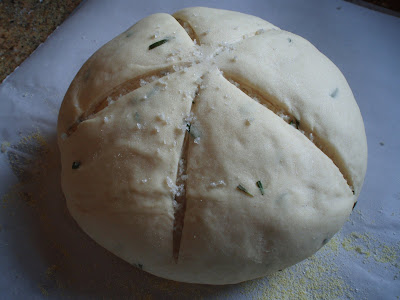 The salt looks faintly sparkly before baking. After baking, it looks a lot like ... salt. 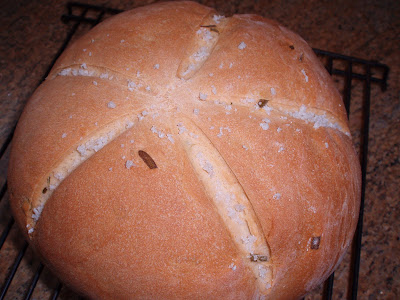 It's a good bread, especially given how easy it is. However, I'll admit it doesn't surpass my own personal gold standard in rosemary bread--Rose's Rosemary Focaccia, from The Bread Bible. Once my nemesis, the rosemary focaccia has become my friend and my go-to bread for all kinds of occasions. But you have to keep trying new recipes; otherwise, you may miss the bread that's even better than anything you've ever made. This one doesn't meet that high standard, but it's certainly worth making, especially if you have a lot of rosemary and not a lot of time.


Notes: The recipe, as given, makes two loaves. I cut it in half. The recipe cautions that it is slightly large for a mixer, so if you make the full recipe, you'll have to stop now and then and push the dough down so it will thoroughly mix. That caution, and the fear of overtaxing my mixer's motor, are the reasons I made only one loaf.
For my taste, the bread was just slightly too salty. If I make this bread again, I'll cut the salt to about six grams per loaf.


Panmarino (Rosemary Bread)
--from The Italian Baker, by Carol Field

Whisk together the yeast, flour, and salt in a large mixing bowl. Using the flat beater, mix in the water, milk, and olive oil. Mix until the flour is absorbed. Add the rosemary and change to the dough hook. Knead on medium speed until elastic, smooth, and somewhat moist, about three minutes. Finish kneading briefly by hand on a lightly floured surface.
You can also knead all ingredients by hand.

Place the dough in an oiled bowl, cover tightly, and let rise until doubled, about 1 1/2 hours.

Gently punch the dough down in a lightly floured surface. Cut the dough in half and shape each half into a round ball. Place the loaves on a baking sheet covered with parchment paper, and sprinkled with cornmeal.

Put baking stone in the oven and preheat to 450 degrees. Just before oyou put the loaves in the oven, slash the top of each loaf in a star shape with a razor blade and sprinkle the sea salt into the cuts of each loaf. Bake 10 minutes, spraying three times with water. Reduce the heat to 400 degrees and bake 30 to 35 minutes longer. Cool completely on racks.
Posted by Marie at 2:21 PM 13 comments: