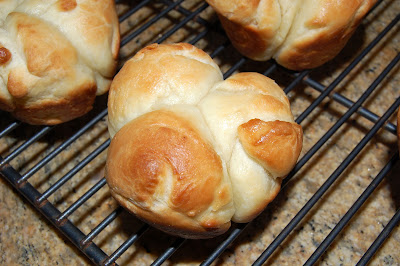 I believe that the butter-topped rolls in The Bread Bible are the best I've ever tasted. They're certainly the best I ever made. But this wouldn't be much of a blog if I just kept repeating the same old recipes, so I tried the "soft butter rolls" from Jeffrey Hamelman's Bread. Better than store-bought rolls, to be sure, but they don't measure up to Rose's version. 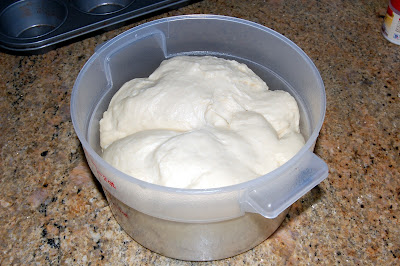 The directions say that the first rise only takes an hour. The dough eventually got nice and fluffy, but it had barely moved after an hour. I put it in the refrigerator overnight, took it out immediately in the morning, and let it rise for another three hours. Only then did it double in size.
I should have wondered--there are four cups of flour in this recipe, but only one teaspoon of yeast. In Rose's recipe, it's more like a teaspoon and a half of yeast for two cups of flour. There was no way this was going to take only an hour to proof. 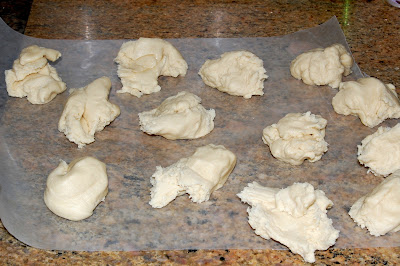 For some reason, I find it very relaxing to divide dough in numerous pieces, weighing each piece to make sure it's exactly the right size. I was supposed to divide the dough into small enough pieces that I'd get two dozen rolls, but it looked like I'd have two dozen bite-sized rolls, so I increased the size and made 18. Once they were shaped, they were supposed to rise again. Hours later, I was running out of time, so they were going to have to go into the oven, risen or not. 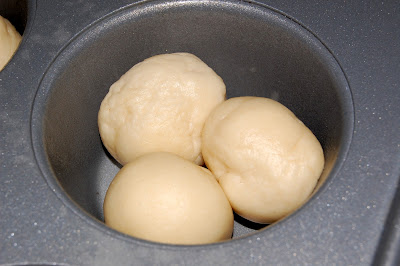 They look a little bit puffy, but certainly not like they're going to turn into giganto-rolls. 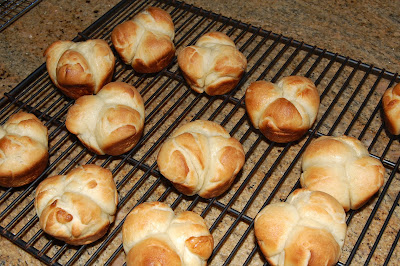 And they didn't. Bigger than bite-size, but not by much. And because they didn't rise enough, they were heavier than Rose's version, not so light and tender. Since they were brushed with butter, both before and after coming out of the oven, they had a lovely buttery taste and the crust had a slight crispness that was very attractive. So definitely not a failure, but neither did they become the new gold standard.
If I tried them again, I'd either add more yeast or allow for a lot more time for proofing. But, since I like to try out new recipes for this blog, I guess I'm not likely to try them again.
Posted by Marie at 1:07 PM 7 comments: 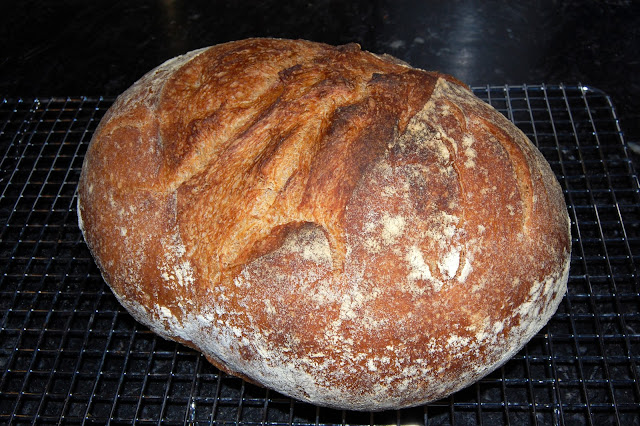 I bought another bread cookbook last week: My Bread, by Jim Lahey, owner of The Sullivan Street Bakery. I'm afraid to count how many bread books I have. But I use them all--eventually.
Lahey is, of course, the person who, along with Mark Bittman, took the bread-baking world by storm with his no-knead bread. For a while, everyone, including me, was baking no-knead bread. Even non-bread-bakers were baking no-knead bread. I think it's now sort of last year, but it should have a place in every bread-baker's repertoire.
In this book, Lahey talks about his travel and background, and what brought him to baking bread. (No offense intended, but he seems like he's kind of a quirky and difficult-to-get-along-with kind of guy). He keeps mentioning that he quit various jobs because he had disagreements with co-workers. But what would you rather have? One more nice guy or an irascible originator of the Sullivan Street potato pizza? I'll take Mr. Irascible, as long as I don't have to live with him.
The book is a slim volume, with recipes for about a dozen basic breads, a few more breads made with liquids other than water, ten or twelve different pizzas, and as many sandwiches.
I chose the pane integrale, or whole-wheat bread, to start with. Except it's not really whole-wheat; it's bread made with some whole-wheat flour. Which is okay with me, because I usually find bread made with 100% whole-wheat flour too dense, solid, and bitter, the exception being Chris in Rhode Island's whole wheat bread.  To be exact, this bread has 300 grams of bread flour and 100 grams of whole wheat flour. So it could be called Pane 1/4 Integrale, I guess. 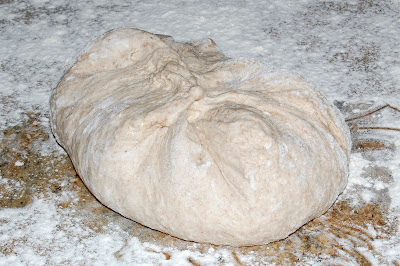 If you recall, no-knead bread begins with a quick mix of flour, yeast, salt, and water. That mixture is left by itself to rise for 12 to 16 hours. (In my case, it was ready for the next step at about 9:00 p.m., but I wasn't ready for it, so I put it in the refrigerator.) The next morning, I took it out, and did the next step after the dough got back down to room temperature. Then you scrape the dough onto a floured counter, and pinch the edges together in the center. 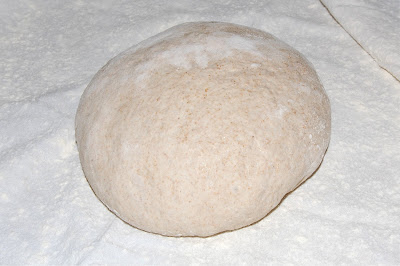 And then you shape the dough into a round loaf. After the dough rises on a floured cotton towel for a few hours, comes the part where you simply have to defy logic and experience, not to mention a fear of burning your hands. Get that preheated pot out of the oven, take a deep breath, and turn the risen loaf into the pan. No, the pan doesn't have to be greased or lined with parchment paper or anything else. Cover the pan and put it back in the oven. 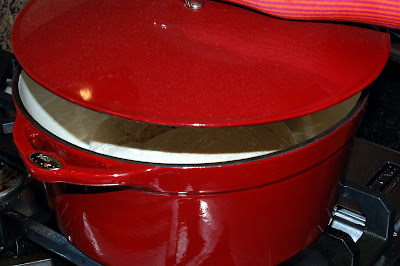 About a half-hour later, you can take the lid off and continue baking the bread until it's nice and brown. You want it to be a deep brown, not a wimpy pale color. 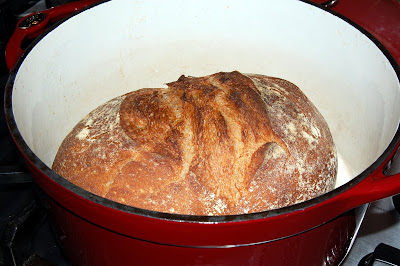 Oddly enough, it comes right out of the pan without any coaxing or prying. At least it always has so far, although anything can happen. As Lahey describes it, the bread "sings" when it's removed from the oven and begins to cool. It's more of a crackly sound than a singing sound to me, but singing sounds more poetic. 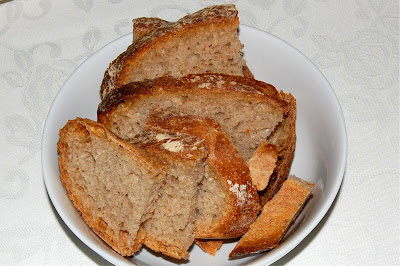 This is a first-class rustic bread. Although I'm not the world's biggest fan of whole wheat bread, in this case I think the whole wheat flour gives the bread a little depth of flavor that the all-white no-knead bread is lacking. You could try any combination of white and whole wheat that you wanted, as long as the total amount is three cups of flour. There are a number of other variations in the book that sound delicious, and a few that just sound odd (the one made with strained sea water and nori comes to mind). But I'm pretty sure I'll return to this recipe.
Posted by Marie at 2:59 PM 6 comments: 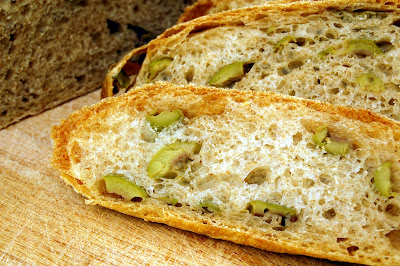 I managed to get hold of a copy of The Village Baker, by Joe Ortiz, a book that I've heard many good things about and which is now out of print. It was originally published in 1993, and some of the relatively recent bread-baking innovations aren't used here; for example, Ortiz uses active dry yeast, which requires proofing, rather than instant yeast, which doesn't. He doesn't talk about making use of a stand mixer to knead wet, artisan doughs--something that makes them much easier for a home baker to handle. Most seriously, he uses volume measurements instead of weighing, and he doesn't even tell you the method he uses for his measurements. These shortcomings don't make the book unusable, but they do require you to make some substantial changes to the directions. Still, I ended up with a very good loaf of green olive bread, made with Picholine olives. 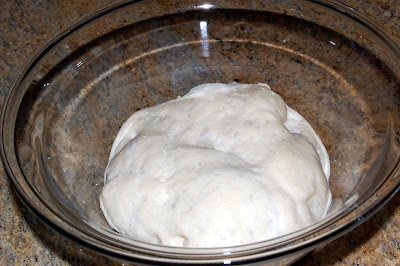 What makes the bread so tasty is its long, slow preparation. First you make a compagnon levain, just a variation on a bread starter. It uses yeast, flour, water, and salt, and is left to rise slowly at room temperature for about 8 hours, and then to rise even more slowly in the refrigerator for another 24-36 hours. 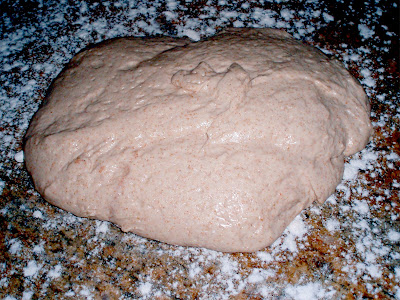 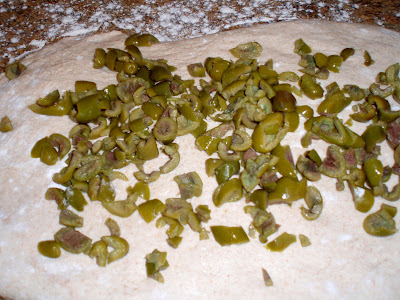 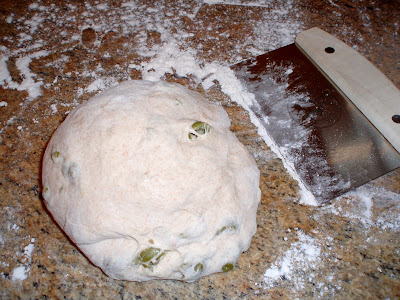 The dough isn't as sticky as it was before its rest, but a dough scraper is handy to use so that it doesn't stick to the counter. 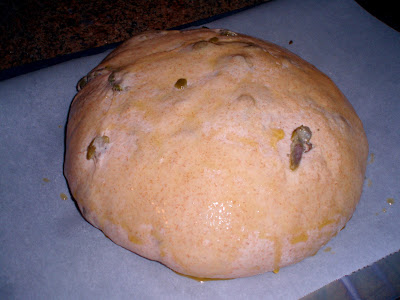 The dough rises again, and then is shaped into a boule. It's brushed with a little olive oil before going in the oven. 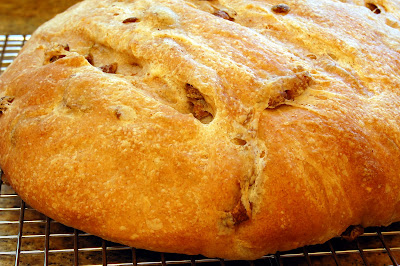 This would be an ideal bread to bake in a banetton because it doesn't hold its shape well enough to make a nice round boule, but I didn't think of that. So I ended up with a flat-top boule. But, of course, no one knows what you had in mind, so it's unlikely that anyone is going to criticize the shape of the bread. 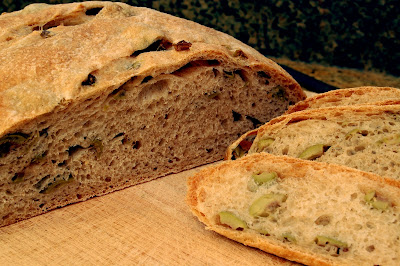 Whether you like the bread will depend on how you feel about olives. The olives are a very assertive flavor, and because there are so many of them, it would be difficult to eat your way around them. It's definitely an olive-y olive bread, and so, in my opinion, it's best as a stand-alone and not as an accompaniment to other food. Just let it cool for a while, and eat it dipped in olive oil. (However, if you want it to accompany, say, a roast chicken or broiled fish, I don't think anyone would report you to the food police).

Mix all ingredients by hand, or with a stand mixer with a flat blade, kneading until the dough is smooth and firm.
Let the dough rise in the bowl, covered with a damp towel, for 8 to 10 hours.
Punch the dough down, and transfer to covered bowl. Refrigerate for 24 to 36 hours.

Using a stand mixer, mix the yeast, water and all but about 1/2 cup of the flours until blended. Add the compagnon, bit by bit, until it is broken up and mixed in with the flour mixture. Add the salt and two teaspoons water. Knead in the rest of the flour, as needed, until the dough becomes elastic. It will still be wet.

Turn out onto the counter and knead by hand, adding more flour if necessary for the dough to be workable. Let rest for 20 minutes.

Flatten the dough and strew the chopped olives on top. Roll the dough up onto itself, and knead it until the olives are necessary. Add more flour only if necessary to keep the dough from becoming too sticky.
Cover the dough and let it rise for one hour.
Flatten out the dough and fold the edges over into the middle to form a round loaf. Place it on a parchment-covered baking sheet and let it rise for about 2 hours.
Preheat oven to 400, putting a baking stone on a rack on the lower third of the oven.
When oven is hot, brush the loaf with the remaining teaspoon of olive oil, slash it 3 times on the top with a razor blade or sharp knife, and bake for 30-35 minutes, until golden brown.
Posted by Marie at 4:51 PM 7 comments: