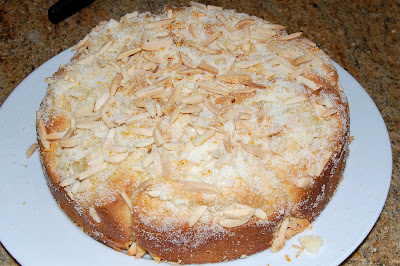 This is not authentic Bostock. But then it's not authentic Brioche either. It's 5-Minutes-a-Day Brioche, which is essentially dump-and-stir bread. A real Bostock is a twice-baked brioche; before bostocks became trendy, they were a way to use up day-old brioche. The thrifty French topped the practically over-the-hill brioche with almond cream and baked them.
Perhaps it was devised by a baker named Bostock, but no one seems to know. 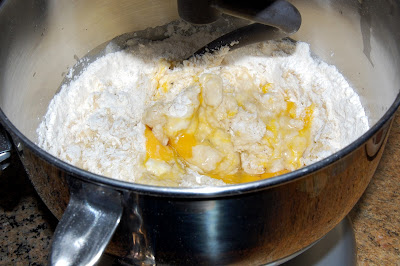 The "5-Minute" brioche recipe is certainly the easiest I've ever made: just mix up water, yeast, salt, eggs, honey, and melted butter; then mix in the flour. 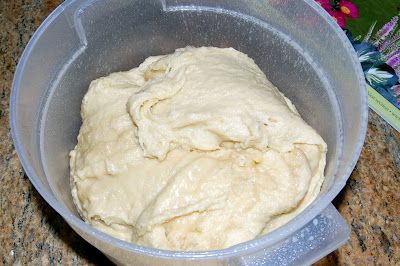 This recipe has a very casual attitude toward the brioche dough: never mind about mixing it thoroughly! Don't let a few floury lumps trouble you! I wasn't troubled, but I ended up having to pick some lumps out of the dough after I rolled it out, so I think I shouldn't have been so quick to adopt the authors' carefree attitude.
I wanted to make this Bostock on Saturday morning, so I mixed up the dough Thursday evening, let it rise for a few hours, and then put it in the refrigerator until I was ready for it. 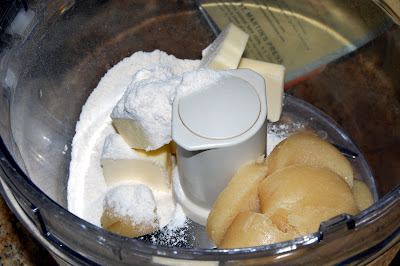 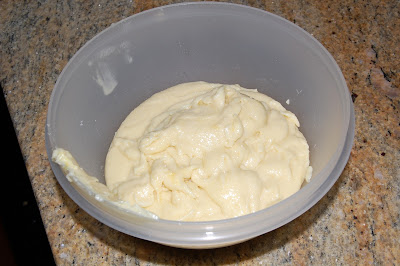 Saturday morning, all I had to do was roll out the brioche dough to an oblong, fill it with the almond cream, and roll it up, jelly roll style. It looked like cinnamon rolls without the cinnamon; everything was very white. 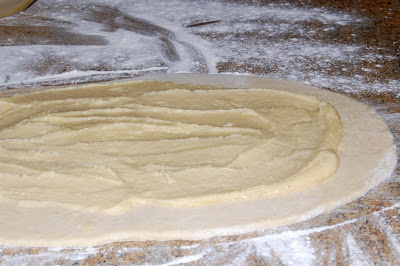 Because there's almost no color difference between the almond paste and the brioche dough, you can hardly see that something is rolled up--it looks like blobs of uncooked dough. 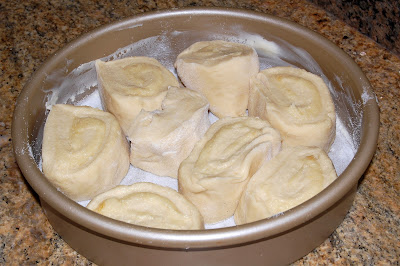 Even the topping--sugar, almonds, and grated orange peel--didn't give it much color differential. 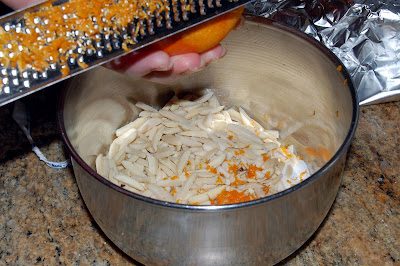 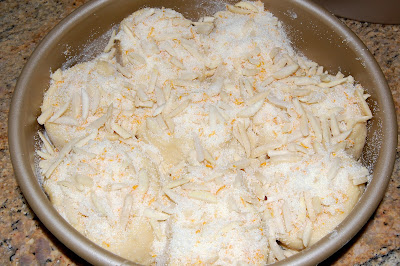 Only if you look at the bottom can you see that these are actually nicely browned rolls. 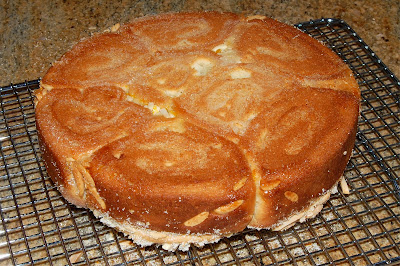 By 9:30 Saturday morning, they were out of the oven, and I was able to serve them warm to the neighbors who come to our house on Saturdays in January for our annual coffee and doughnut hours. They tasted very good, but not as good as the Bostock I've had from good bakeries. The almond cream layer kind of baked into the brioche, so there wasn't that lovely, gooey, almondy topping that you get on a proper Bostock.
On the other hand, a proper Bostock can't be whipped up on Saturday morning and be ready to serve just a few hours after the second punch of the snooze alarm.


Almond Brioche Bostock
from Artisan Bread in 5 Minutes a Day.

1. Make the brioche: mix the salt, yeast, eggs, honey and melted butter with the water in a large bowl. mix in the flour without kneading. The dough will be loose but will firm up when chilled. cover the dough and allow to rest a room temperature for 2 hours. Cover the dough bowl with plastic wrap and chill in the refrigerator until ready to use.

2. Make the almond cream: cream together the butter, almond paste, flour, egg and almond extract in a food processor until smooth and set aside.

3. Dust the surface of the refrigerated dough with flour and cut in two even pieces. Dust the piece with more flour and quickly shape into a ball. Roll the dough out into a long rectangle (about 1/4 inch thick), using enough flour to prevent it from sticking to the counter. Spread the almond cream evenly over the rectangle and roll the dough up like a jelly roll, starting at the long end. Repeat with second ball of brioche dough. Chill the log in the freezer for about 15 minutes. Grease an 8 inch round cake pan with butter and sprinkle liberally with sugar.

4. Cut the chilled dough into 8 equal pieces. Place them evenly in the cake pan so the swirled edge is facing upward. Allow the dough (covered) to rest in the pan for an hour. Twenty minutes before baking time, preheat the oven to 350 F. Just before baking, combine the sugar, orange zest and almonds and sprinkle over the brioche. Bake for about 40 minutes or until golden and well set in the center.

6. When you remove the brioche from the oven the run a knife around the inside of the pan to release the bread from the sides and invert it onto a large plate. Eat while warm.
Posted by Marie at 5:39 PM

Marie,
I must admit that though I am quite familiar with brioche I have never heard of Bostock. It does look quite good and I'm sure I would think that yours, if I were so lucky to taste it at one of your January open houses, would be the best Bostock I've ever tasted.

I've never tried this before but now I'm going to keep my eye out in the bakery for it. I like to try bakery (good bakery) versions of bread before I make my own.

I love your posts! Whenever they show up in my google reader I'm like "yes!"

Stephanie,
You are so nice! What a sweet thing to say.

This looks wonderful…I can't wait to try it!

I haven't heard of Bostock before this informative post. It baked up beautifully, though, nice and golden. I like the Fiori de Sicilia, too!

Glad to see you are getting your mileage out of the WS goldtouch pans. I remember the post when you first bought them :-)

Hope you are having a good week...as I sit here NYC is enduring yet another snow storm. You know you are a baker when a snow storm hits and your first thought is what you can bake while locked inside the house.

Add another member to the "never heard of Bostock" camp. I fear I may not be as trendy as I think! It looks delish, and I am impressed you are able to start planning (and doing) on Thursday what you will be eating on Saturday. I'm sure your neighbors know just how lucky they are! Are you going to try and tweak the recipe to get the filling the way you would like, or are you simply going to go to a trendy bakery?
Chris in Unusually Snowy RI

Laura,
I remembered that post when I brought those gold cake pans out of hiding. I really haven't used them very much because they're 8-inch pans and most of Rose's recipes call for nine-inchers.
Baking is the perfect thing to do when you're snowed in!

Chris,
There are at least four bakeries and one restaurant in Minneapolis that make Bostock. I think it started with the one restaurant, and then people started asking for it at bakeries. These are the high-end bakeries, of course--not the ones that make jelly doughnuts.

Hi, may I know what is almond paste? I don't know if I can get it in baking shops, can I make it?