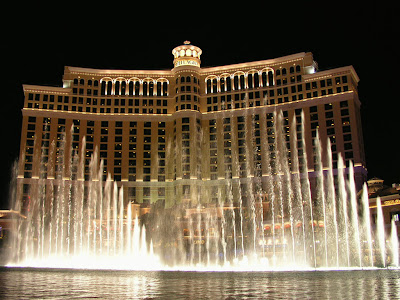 Off to Las Vegas for a family Thanksgiving. No bread for a few weeks. I am consciously avoiding any lame jokes based on "bread" and Las Vegas.

Happy Thanksgiving, everyone!
Posted by Marie at 7:17 AM 7 comments: 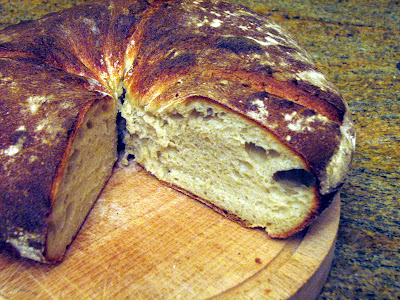 This recipe is from Maggie Glezer's Artisan Baking, but, luckily for me, Rose put the recipe on her website just a month or so ago, and I don't have to type it out. Also, it got the RLB Seal of Approval, so you know it's good.
Tortano and casatiello seem to be used interchangeably, and they refer to a round-shaped Italian holiday loaf which, in its full glory, contains lard, salami, and cheese and also has four raw eggs, still in their shells, which are placed atop the unbaked bread and cook while the bread bakes. This version looks like a full-meal bread and then some, but the version I made has no lard, no salami, no cheese, and no eggs, raw or otherwise. It takes a long time to make, but is otherwise not particularly difficult. In fact, although Glezer lists it as a bread requiring "intermeditate," rather than "beginning" skills, I think the only reason for the upgrade is that the dough is wet and sticky. Don't let that deter you from making this delicious bread--if you soldier through, you'll be impressed with yourself when you realized you turned out this artisan bread from your own kitchen. 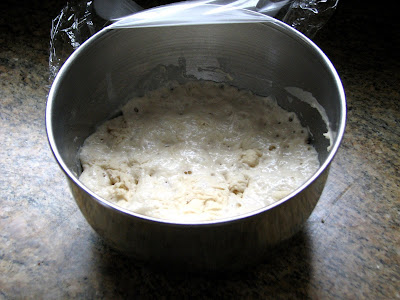 It takes just a wisp of yeast to make this bread--a quarter-teaspoon dissolved in a cup of water; only 1/3 cup of this yeast water is used, making a total amount of about 1 1/2 teaspoon of yeast. I was doubtful that this would work and was tempted to cheat by adding a little more, but I didn't. I mixed this pre-ferment up on Tuesday at about 5:00 in the afternoon. When I got up on Wednesday morning, it had bubbled up and grown enough that it was clear that it was working. (I had a chance to bake on Wednesday because it was Veterans' Day, and government workers get that day off). 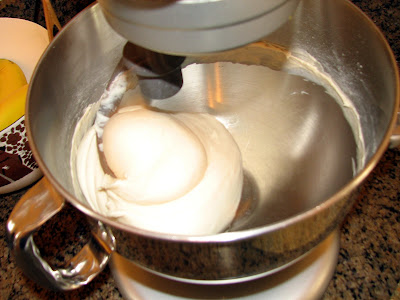 The dough is made with the pre-ferment, more flour and water, some honey, and about a quarter-cup of potato puree. I used half a leftover baked potato, but you could also use a boiled potato. It takes about 10 minutes to turn this mixture into a smooth, silky dough--very moist and sticky, but not a problem to handle if you flour your hands.
It needs another four or five hours to rise, and you can't just walk away and leave it. For the first 80 minutes, it requires tending every 20 minutes, when you take it out of the bowl, flatten it, and fold it. 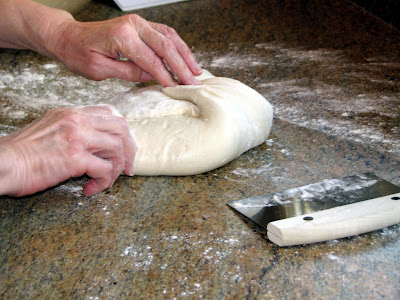 The dough scraper is a fine invention. If you didn't have it, you'd really fight with the dough when you were folding it because it would want to stick to the counter.
Finally, after about five hours, you get to punch a hole in the center of the round loaf that you've shaped. (This is the shape that makes it a tortano). With your hands, you enlarge the hole. You should enlarge it more than I did, because when you bake it, the loaf gets quite a bit bigger, and you can end up losing most of the doughnut shape. 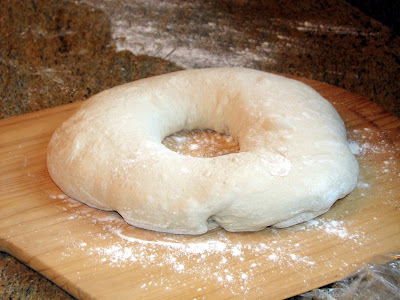 Here is the bread just as I'm about to make four slashes in the top and put it in the oven.
Below is as it comes out of the oven, 40 minutes later. 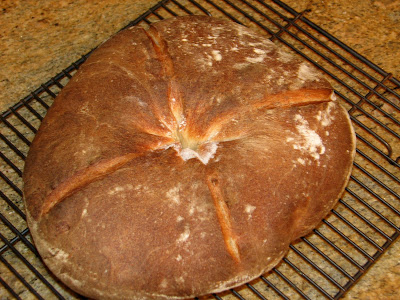 The bread is supposed to bake for 40 to 50 minutes, or until it is a "very dark brown." After a half-hour, it seemed brown enough, but I let it go another 10 minutes, by which time it was indeed very dark. 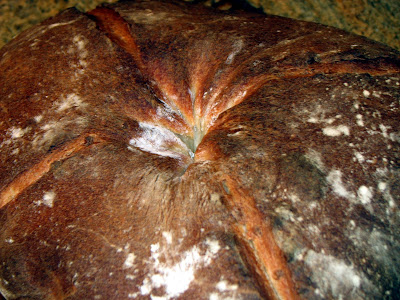 It had taken so long for the two risings that the bread didn't come out of the oven until after 6:00, so there was no time to sample it before we went to Gigi's for our usual Wednesday pizza and bottle of wine. When we came home, we had to have bread for dessert. Seriously. If you live in fear of carbs, the idea of bread after pizza should make you tremble.
This is probably not the ideal way to appreciate this bread, but I'm glad we had some the same day it was baked. The only down side to this tortano, aside from its taking its sweet old time to get ready, is that its life span of perfect freshness is not that long. 24 hours later, it was still good, but not as spectacular. Its crust is crusty, the holes are, as promised, as big as radishes. The bread itself demands savoring--with every bite you can taste the earthiness of the potato and the slight sweetness of the honey.
Every ingredient counts in this wonderful bread, and you are again reminded that the simplest, homiest ingredients can result in something spectacular.
Posted by Marie at 5:22 PM 14 comments: 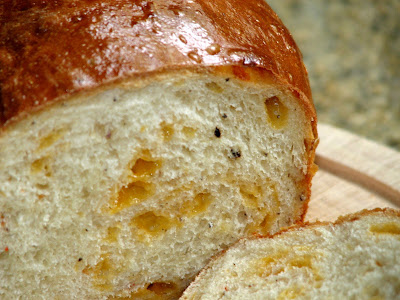 I didn't think I'd have time to bake bread this weekend, but we were having guests over for appetizers in the afternoon and I wanted to serve something I'd baked. When I ran across this recipe, it seemed perfect: it looked pretty fast and easy, and so full of flavor that it wouldn't much much matter that it hadn't had a long, slow rise for subtle flavor development. With 2 teaspoons black pepper and 1 teaspoon of red pepper flakes, this was not, I predicted, going to be a subtle bread! Nor was it. But it was very good in it unsubtle, but tasty, way. 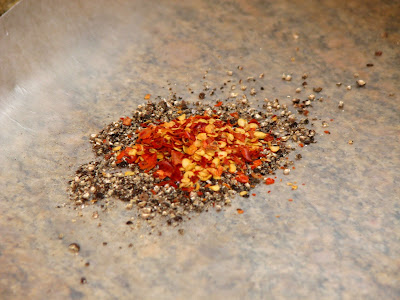 Even after being kneaded by machine for five minutes, the dough was still too sticky, so I kneaded in more flour by hand, 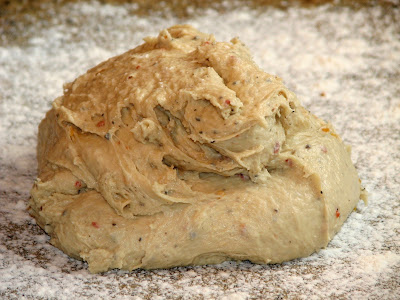 and then flattened it out and sprinkled half the cheese on top. 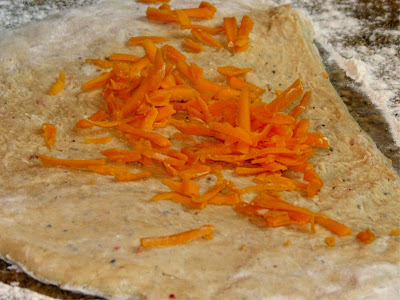 This cheese is so orange it looks like grated carrots, but it's not. 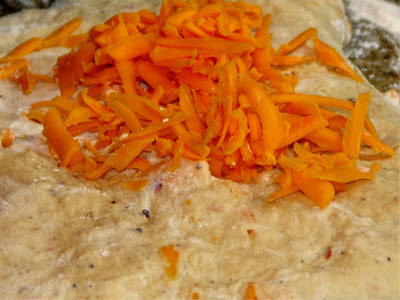 You can see the little bits of cheese that have already been mixed in. It takes only about 45 minutes for the dough to double in size--ready to be shaped into a ball. 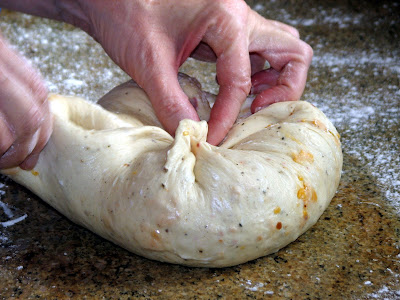 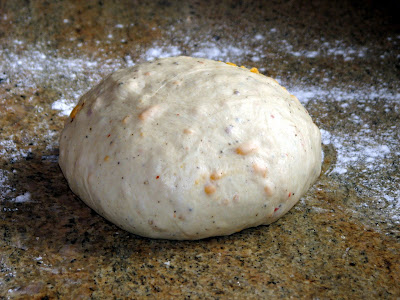 Another 45 minutes for it to be nice and puffy, 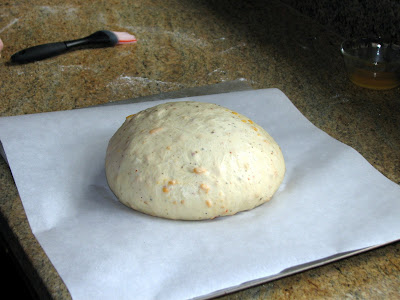 And ready for the slash-and-brush treatment. 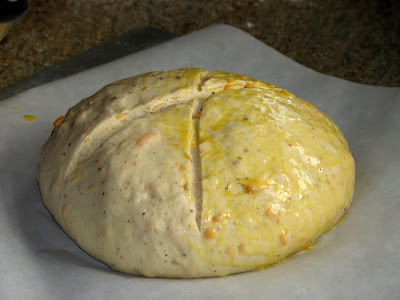 I'm crazy about the shine you get with an egg glaze. Sometimes I wish I could brush an egg glaze on everything I make, but I don't because I'm a conformist at heart. Also, I suppose it would get a little monotonous. 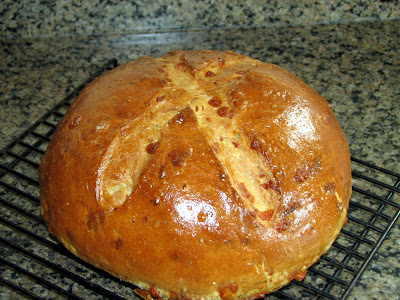 I was just a bit worried about serving this bread to our friends because I just wasn't sure how the three teaspoons of pepper were going to play out in a loaf of bread. I pictured Bill and MaryAnn taking a bite of bread and spitting it out. Then I pictured myself getting angry because they spit out my bread, and pictured Jim trying to make peace. Fortunately, none of that picturing actually happened. The bread had a lovely peppery bite, but it wasn't at all overpowering and went very well with the tangy bits of cheddar. 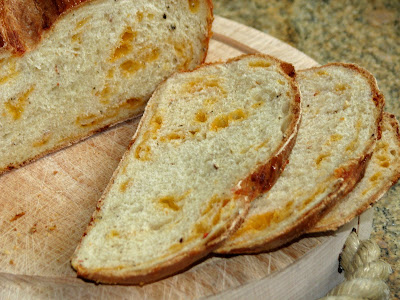 I tried it the next day, toasted, as the base for a fried egg sandwich, and that was an inspired combination. All you have to do is have the courage to toss in a full tablespoon of peppers into a standard white bread dough, and you end up with a nice accompaniment to appetizers, a way to upgrade a plain dinner, or a surprisingly good piece of toast.

1. Mix milk, yeast, salt, peppers, flour, and all but one tablespoon of the beaten egg into the bowl of a stand mixer.
2. Knead on medium speed for about five minutes. If it is still sticky, turn the dough out onto a floured counter and finish kneading until dough is smooth and workable.
3. Flatten dough and scatter half the cheese over it. Knead dough until cheese is mixed in, then flatten again, and add the rest of the cheese. Knead until all cheese is incorporated. Place the dough in a lightly oiled bowl. Turn once, then cover and set aside until doubled in bulk, about 45 minutes to an hour.
4. Push the dough down, then turn it out onto the counter. Shape it into a tight ball. Cover and set aside until doubled in bulk again, about 45 minutes.
5. Preheat oven to 375. (Optional: put baking stone on shelf in lower third of oven and let the stone preheat as well).
6. Slash an X in the top of the bread and brush with the reserved beaten egg.
7. Bake about 45 minutes, and turn onto a rack to cool.
Posted by Marie at 5:39 PM 19 comments: