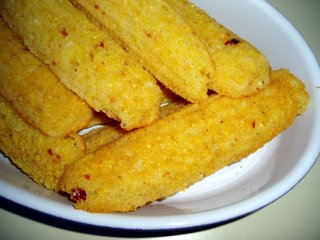 Sunday, June 25, 2006
This is the 41st recipe I've tried! That means I'm halfway there--I've baked 41 out of 82 recipes from The Bread Bible. I feel good because I think I'm really going to make my goal, but I'm also wondering what I'm going to do without this obsession to keep me happy.
If I need to be happy next year, I guess I could whip up a batch of these corn fingers. They're easy to make, if you don't count cooking the corn and cutting it off the ears (I ran into a friend at the grocery store, and he eyed my two ears of corn--"You can actually buy this stuff in cans, you know," he said, but I don't think it would have tasted so sweetly tender). The same person advised against buying the coarse-ground cornmeal (the only stone-ground cornmeal available in the store); he said he'd used it for cornbread, and it was too rugged. I agree with him on this point--I think these sticks would have been a little better with a finer grind. Still, that's just nit-picking. The combination of the sweet corn, the hot red pepper flakes, and the buttery-rich batter is a real winner.
I was less pleased with the molds. Maybe it was just because this was the first time I'd used them, but they didn't really unmold that willingly. I had to fill up the bottom of the dish with the rag-tag corn sticks and cover them up with the few that turned out pretty well in order to get a decent picture. If you're not taking pictures, though, and you're not serving guests, you probably won't care. Although, come to think of it, if you don't have guests, and you don't want to invest in the cast-iron pan that's a little iffy about the unmolding process, you can just bake a pan of cornbread with this recipe.
Posted by Marie at 8:00 PM 1 comment: 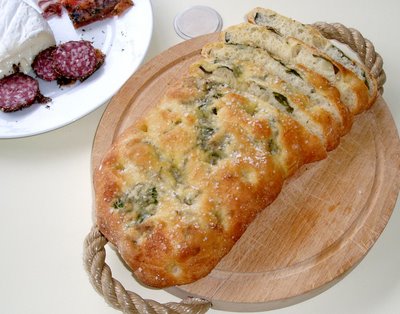 Saturday, June 24, 2006
I was a little apprehensive about making focaccia again since my first attempt was not successful, but this is an absolutely wonderful bread. I've noticed that every bread I've made with durum wheat has outstanding flavor and texture, so when I run out, I'll definitely order more.
This dough is great for your inner three-year-old. You knead it by hand, with a special technique that involves stretching and turning and pressing--in non-technical terms, you play with it. It's a lot like playing with Play-Doh only it's the real thing. It was also very satisfying to see it turn from a rather unpromising mass with blobs of olive-oil-soaked flour into a smooth, pliable dough.
And this bread is very forgiving. I made a few mistakes with it, and it didn't seem to mind at all. I forgot to add the salt, so I just kneaded it in after it had already risen, and let it rise again. Then I neglected to roll it out on floured parchment paper (and the directions are quite clear about this), so I had to scrape it off the counter and plop it onto the parchment. It got a little misshapen, but nothing really bad happened to it.
I gathered fresh basil, parsley, chives, and rosemary from my herb garden, placed them on half of the bread, folded it over, spread it with olive oil, and sprinkled it with some French sea salt (another unreasonable bread expenditure--$10 for a jar with a picture of French peasant women gathering what looks like gray ocean scum). It's very salty salt. It may not be worth $10, but maybe my palate is just not sufficiently sophisticated. It's sophisticated enough to appreciate this bread, though, which I must say is probably the best focaccia I've ever tasted.
Jim and I went to the new Trader Joe's and got gravlax, salami, cheese and strawberries to eat with the bread. Our wine was even a step or two up from Trader Joe's Three Buck Chuck. Another delightful Saturday afternoon cocktail hour.
Posted by Marie at 10:20 PM 2 comments: 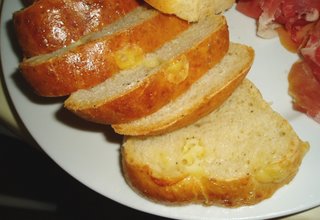 Sunday, June 18, 2006
As it was Father's Day today, I told Jim he could pick the bread du jour. He picked stud muffin, more for the name than anything else, I think. I wanted to have the bread ready for cocktail hour, so there was no time for the 8-hour rest in the refrigerator. This 8- to 24-hour period is supposed to enhance the flavor, but it's hard for me to think that this bread could have been much more flavorful than it was. The dough itself is made with grated Parmagiano Reggiano and pecorino romano, plus the cubed gruyere studs, so it's well-nigh impossible for it to be boring. The gruyere, especially where it's moved to the top and sides and has become melted and crusty, is fabulous, and the bread is wonderful with wine and prosciutto at the aforementioned cocktail hour.
My souffle pan is only 1 and 1/2 quarts instead of 2 quarts, so I tore off about a quarter of the dough to bake several individual breads in glass custard cups. This is my own innovation, born of necessity, and I must say it's a fine variation. Because of the smaller size, there are more crusty bits than in the large loaf. In this bread, crusty bits are a good thing.
Posted by Marie at 7:58 PM 1 comment:

Wednesday, June 14, 2006
My nephew Bob asked me to repeat the strawberry shortcake that I made last month. I'm not repeating recipes for anyone yet, even for Bob, but I realized that I could make a new shortcake using the Angel Light recipe. The best part of bakiing these in North Carolina was that, unlike in Minnesota, White Lily self-rising flour is easy to come by. In fact, it's impossible to miss at the Holden Beach Food Lion. The worst part about baking them on vacation is that I didn't have any of my equipment, and I had to improvise again. I didn't have any baking sheets (well, I did really, but they were hiding until after the biscuits were already made), I didn't have my scale, which I've come to rely on enormously, and I'd never used the oven before.
Although a few of the biscuits got a little brown on the bottom (from baking them in pyrex cake pans, I suspect), and although they were a little too lumpy and spread out to be gorgeous, I couldn't have asked for more enthusiastic eaters than my family. After they'd eaten some biscuits with strawberries and whipped cream, they tried them au naturel, and liked them that way too. 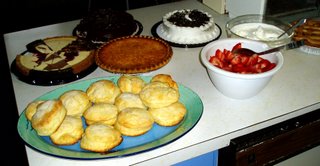 I brought them to a dessert spread at Bob and Karla's house, and Bob waxed rhapsodic about them, although it turned out that he isn't that crazy about strawberries, and Sarah said they were the second-best biscuits she'd ever eaten. I liked their lightness and their flavor was buttery and sweet but not too sweet, but I prefer the denser, more biscuity texture of the butter biscuits I made earlier. 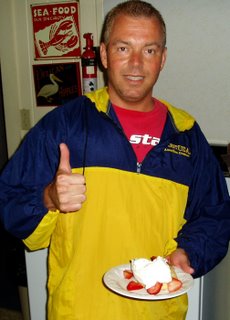 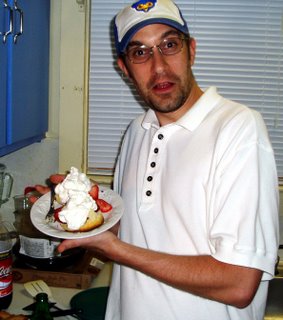 Tuesday, June 6, 2006
We've rented a beach house in North Carolina next week, for a family reunion. Staying at the beach in the summer generally entails wearing a bathing suit, and, the older I get, the more it seems that a bathing suit is exactly what I should not be wearing. At least, I thought, I could try to lose a few pounds before I get there. What does this have to do with chocolate chocolate-chip bread, you ask? Just that this is another bread that I took into work, where it's likely to be devoured quickly enough that it won't be able to do much damage to my hips.
A quick bread is a pleasant diversion after baking only yeast breads for a few weeks. The pleasure that you lose in not seeing the bread rise and not smelling the yeasty baking aroma is made up for by the ease of turning it out, and, in this case, the smell of chocolate in the air.
The dough for this bread was soft, almost souffle-like. When the bread came out of the oven, it unmolded nicely but left a few bits of chocolate and chocolate chips stuck to the pan. Although I had told myself that I wasn't going to eat any of this bread, I thought I'd just eat a crumb to try it out. Then I scraped off every crumb, every morsel, from the pan and gobbled it greedily. I was glad no one was around to see me.
I took it into work on the same day that Ben brought in a plate of chocolate cupcakes, so we agreed that Ben's cupcakes would be eaten in the morning, and my bread would be the afternoon's offering. I wasn't going to eat any bread--because of the bathing suit situation--but then told myself that I couldn't do an honest blog description if I didn't taste it. My verdict: an excellent, very versatile bread. It could pass as a cake and make a very respectable dessert, served with fruit and whipped cream, or a tea bread, or a morning coffee cake, or a midnight snack. I brought one piece home for Jim, who's out of town this week, and put it in the freezer. Of course, if I were to eat it as a midnight snack tonight, he'd never know.
Posted by Marie at 10:08 PM 3 comments: 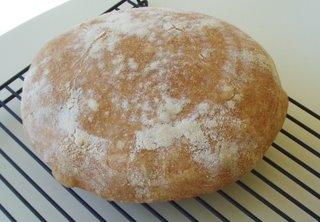 Saturday, June 3, 2006
When I asked Jim what kind of bread he wanted this weekend, he said, "a crusty one." Instead of telling him that all bread has crust, as I might do if I'm in a snarly mood, I, like a good wife, looked through The Bread Book until I hit on the Pugliese.
There are no good stories about this bread because it came together as easy as pie (why do people say that anyway--has pie ever been easy?). I went to two garden stores with my friend JoAnne while it was rising; then I came home and shaped it and JoAnne and I went out for lunch while it was rising a second time. It was almost ready to put in the oven when we got back from lunch, but it was willing to wait patiently until I preheated the oven. The day was hot, and so was the oven, but the bread took only 15 to 20 minutes to bake.
This bread is stupendous. Look at those nice big holes--does this bread not look like I've been baking bread for years instead of months? And what a treat! I planted the flowers I bought, and Jim installed a new irrigation system. When we were both done, we rewarded ourselves with Pugliese with olive oil and glasses of Pinot Grigio and sat on our back porch, admiring our handiwork. There was a nice breeze and the scent of the last lilacs filled the air. Life is very good.