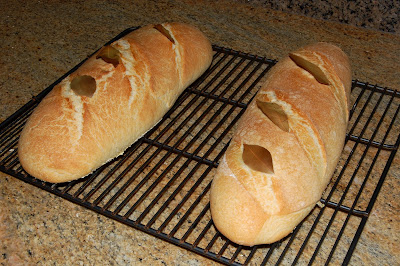 Although I definitely haven't committed to making bread from every country in the world (in fact, every time I think of it, it seems to be a crazier idea). But I've noticed that ever since my friend David suggested this as a project, I've been drawn to any recipe with pan, pane, brood, pain, or brot in it. Luckily, I don't know how to recognize the word for "bread" in Russian, Arabic, or a host of other languages, so I haven't gone crazy. So far. 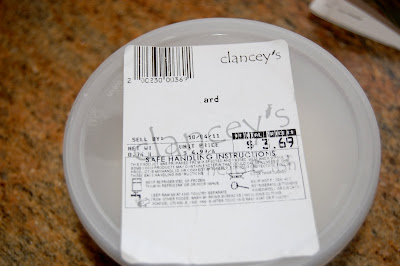 There are a couple of things about this bread that are unique, at least to me. First, it's made with lard, instead of butter or oil. The word on the label is actually "lard," not "ard." I checked all the dozen or so containers of lard to look for one that didn't say "ard," but I searched in vain. Apparently Clancey's printer doesn't do ls.

When I read the recipe for Cuban bread more closely, I saw that the recipe is actually for pan de manteca (lard bread) instead of pan de agua (water bread). Apparently pan de agua is more commonly sold in bakeries, but since I'd already bought the manteca, I was certainly going to use it. 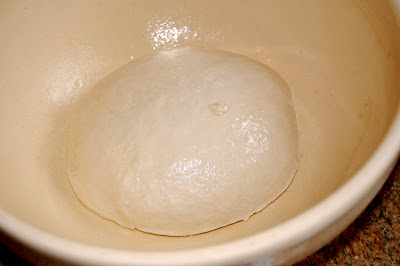 Most of the 4 tablespoons of melted lard is mixed in the dough, but a bit is put on the top of the dough when it's put in a bowl to rise. 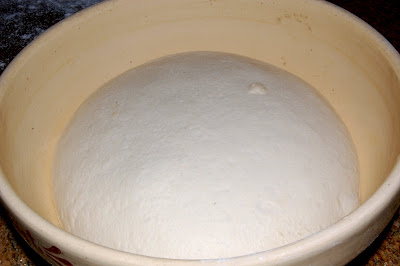 It's an enthusiastic riser, and takes only about an hour for it to double in size. Its second rise, done after it's shaped into loaves, is only 5 to 7 minutes--really a rest rather than a rise. 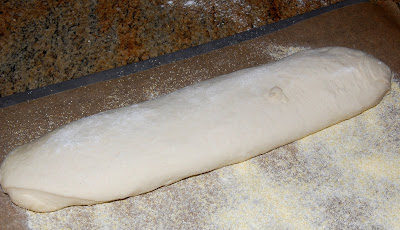 Unlike a ciabatta with poolish, say, this bread has no pre-ferment and short rising times, which makes it a good recipe to know about when you have a mid-afternoon urge to make bread and you want it for dinner. 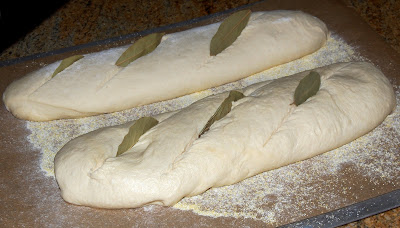 Another thing that makes this bread unique is its decoration with bay leaves, tucked in the slashes. If you don't have bay leaves, you don't have to run out and buy a jar--they're not essential to the success of the bread. But if you have them, you might as well use them, especially if you suspect that they've been lolling around on your spice rack for years and it's probably time to replace them with leaves that smell like bay. 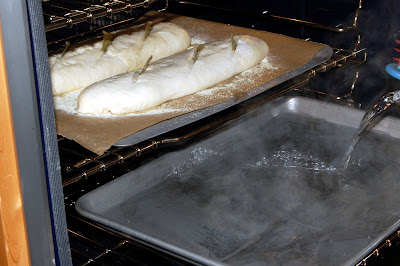 But the most unique thing about this recipe by far is that it starts in a cold, but steamy, oven. That's right--no preheating. Just a pan full of boiling water. For some reason, starting the bread in a cold oven makes it so steamy that the door is covered with condensation and you can't see in the oven. I'd love to know why the Cubans, unlike everyone else in the history of bread, decided to start theirs in a cold oven. Maybe this is just an eccentric recipe, but I'd rather think that there's a good story behind this method. 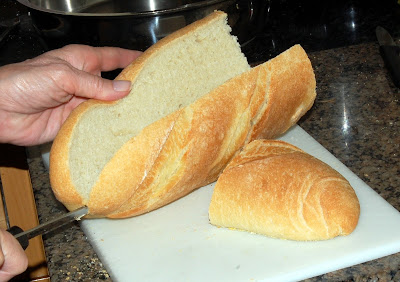 At some point in the afternoon, it occurred to me that if I had two loaves of Cuban bread, I should use at least one of them to make Cuban sandwiches. I sliced part of a loaf in half (sans the bay leaves), spread mustard on each half, and layered ham, roast pork, baby Swiss, and sliced dill pickles on the bottom half. 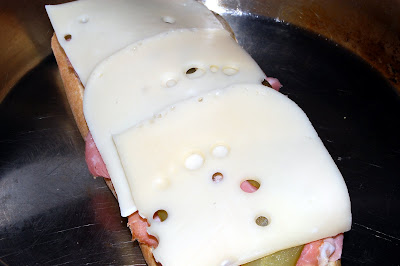 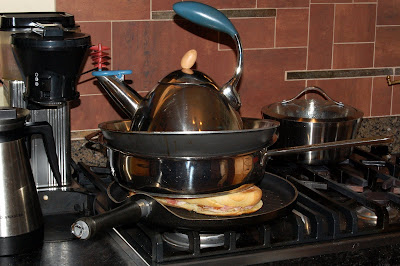 This sandwich was so good, and so easy to make--assuming you have all the necessary ingredients, it goes together in no time. It's an odd combination of ingredients, but it works. I like to picture the same Cuban grandmothers who decided to bake bread in a cold, steamy oven, also standing around arguing about what to put on the bread. I think that they couldn't agree, so they each just shouted out their favorite food: Mustard! Pork! Cheese! Then they stuffed it in their just-baked bread, heated it up, and ate it. They were in hog heaven. Or, as they say in Cuba (maybe), paraíso de los cerdos. 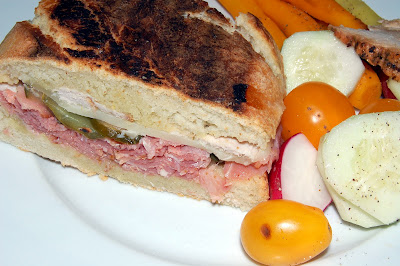 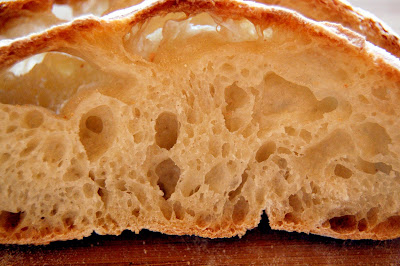 I made another version of ciabatta about two years ago, when I made a very similar recipe from the same book: Bread, by Jeffrey Hamelman. Two years ago, I reported this conversation:


Jim looked at the cookbook and asked me if I was making ciabatta with poolish. "No," I said, "I'm making the one with the biga." "What's the difference between biga and poolish?" he asked. "Ummm," I said, "well, you know." "No, I don't," he said. I didn't want to admit I really didn't know the difference myself. I searched my memory. "Well, you ferment them ahead of time and add them to the dough. And poolish means Polish. I think." I finally looked it up, and there's not a huge difference, except that a biga is a more generic term for a pre-ferment and can be soft or stiff in texture, and can be refrigerated up to three days, whereas a poolish is never refrigerated.

So this time I made ciabatta with the non-refrigerated, soft poolish. It was very good. But I see that I reported that the ciabatta made with stiff biga was also very good.  This made me realize why I'm not a true baker: I'm not scientific. I don't keep at a recipe until I've perfected it. I'm haphazard. I make ciabatta when I feel like it, which seems to be about every six months, judging by a search for "ciabatta" on my blog. On the other hand, I get to make ciabatta when I feel like it. 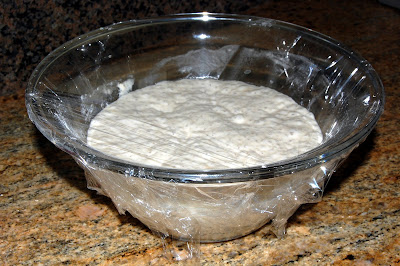 Please don't be intimidated by the foreign, exotic-sounding poolish, or by the make-ahead nature of it. The poolish could not be easier to make: you mix up water, flour, and a smidgen of yeast with a wooden spoon. Then you cover it with plastic wrap and go to bed. (You actually don't have to go to bed. You just have to leave the poolish alone for 12 to 16 hours, so if you are younger than I am and have more entertaining things to do with your time on Saturday night, feel free. I went to bed). When you get up (or get home, if you've had an exciting time of it), the poolish is bubbly and ready to go. 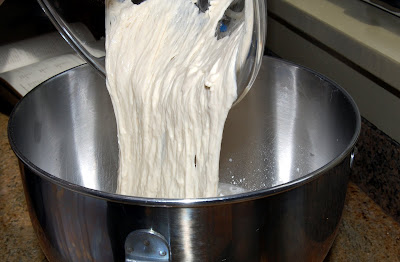 And don't be intimidated by the rest of the bread dough; that's simple too. It's just mixing the poolish into more bread flour, water, and yeast. If you want to be intimidated by something, you can worry about working with the outcome of the easy mixing: a very wet, very sticky dough, that is, according to Hamelman, so delicate that it might collapse if you sneeze. Now those are words to intimidate. 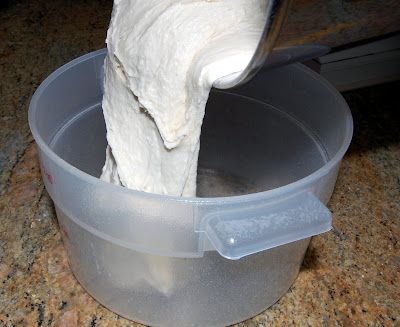 And you get plenty of opportunity to handle it. The first rise is about three hours, but you're supposed to take it out of its bowl, watching it slowly and silently plop onto the counter, and fold it into thirds, then carefully put it back in the container. 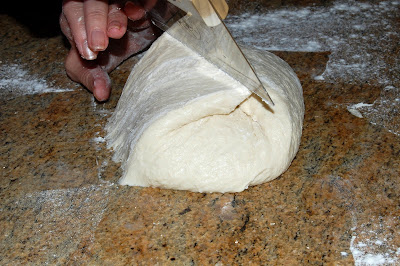 Next in the process--shape it into the typical oblong, flour-coated ciabatta loaves. The home version of the recipe makes three loaves. I cut the recipe in half, but made two smallish loaves. I should have made 2/3 of the recipe, but dividing by 3 is harder than dividing by 2, which was already taxing my limited math abilities. 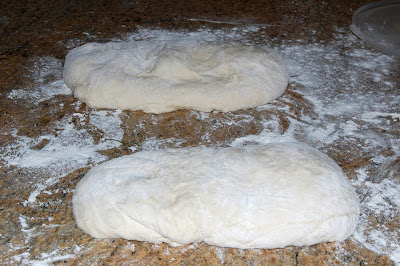 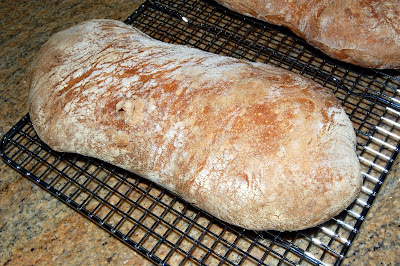 If you want a super-crispy crust, you can do some kind of steam contraption. Depending on my mood, I toss ice cubes on a preheated cookie sheet, pour boiling water in a preheated cookie sheet, or use my steamer. I always use a baking stone when making a rustic kind of bread. Even if you don't want to do those things, though, I think the bread would still taste better than almost anything that you can buy, which is good because it goes stale very quickly.

Here is the recipe. As I mentioned, I divided it in half and got two rather small loaves. If you make the whole recipe, I recommend either giving some away or freezing at least one loaf because it just won't be as good the second day:

Ciabatta with Poolish
from Bread, by Jeffrey Hamelman

1. POOLISH. Disperse the yeast in the water,, add the flour, and mix until smooth. Cover the bowl with plastic and let stand for 12 to 16 hours at room temperature.

2. MIXING. Add all the ingredients to the mixing bowl, including the poolish. In a stand mixer using a dough hook, mix on low speed for 3 minutes. Finish mixing on medium for 3 1/2 to 4 minutes, until gluten development is evidence. The dough will still be loose and sticky, but should have some "muscle".

3. FERMENTATION AND FOLDING. Put the dough in a mixing bowl sprayed with baker's spray. Fold the dough twice, after one hour and again after two hours.

4. DIVIDING AND SHAPING. Flour the work surface copiously. Invert the dough onto the work surface and pat out the larger air bubbles. Lightly flour the top surface of the dough. Cut the dough into 3 rectangles, weighing about 18 ounces each. Gently shape into rectangles. Place the dough piece onto floured bread boards (I used floured parchment paper). Cover the shaped dough with baker's linen and then plastic.

6. BAKING: Preheat oven to 460 degrees.
To transfer the proofed dough to a baker's peel, spread the fingers of both your hands. With a quick, deft stroke, invert the dough piece so that the side that was touching the bread board is now on top. Place one hand at each end of the dough piece, bring your fingers underneath, and pick it up. Here you will slightly punch the dough for easier transport; there should be wrinkles in the center of the loaf as the transfer it to the peel. [I just picked up the parchment paper and put it on top of a pre-heated baking stone--I'm using his instructions here just to show why I think they're hard to understand.) Fill the oven with steam, load the ciabattas, steam again, and bake for 34-38 minutes. (I used the steam machine; otherwise you can use either an ice cube or boiling water method to get steam. Hamelmans thinks you should use all three: ice cubes on a heated skillet before the bread goes in, boiling water on a heated pan when the bread goes in, and spritzing with water too). Lower the oven temperature by 10 or 20 degrees if bread is taking on too much color, but be sure not to underbake.
Remove the bread from the oven and let cool on a baking rack.