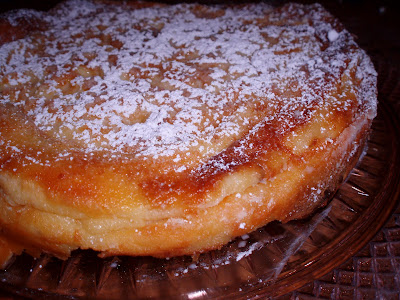 Granted, this is not a bread. It's not even a cake, exactly. It's more like a clafoutis, except it's made with prunes soaked in Armagnac, rather than with cherries. It's the national dessert of Brittany, where I just spent a vacation, and it was so good I wanted to try making it myself. (I have also wanted to try making crepes, the other famous food of Brittany, but am more intimidated by that). 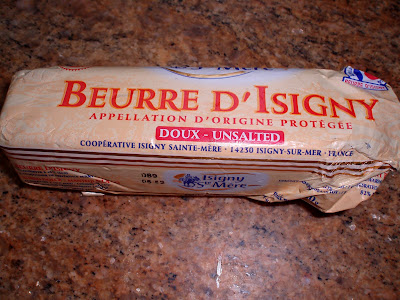 Brittany's butter is world-famous, according to the Butter Council of Brittany. It's lightly salted, whereas most French butter is unsalted. At my local grocery store, there was no Beurre de Bretagne, but there was Normandy butter. Unsalted. I settled for that. I hope that Brittany and Normandy aren't arch-rivals, like Minnesota and Wisconsin. 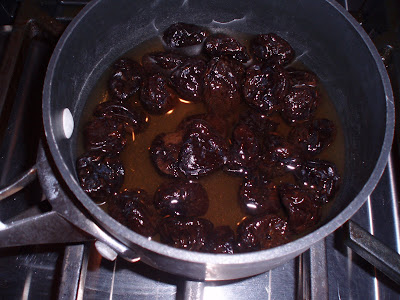 Let me say a word in favor of the much-maligned prune. Even as a child, I understood that there was something faintly ridiculous about a prune. Only grandparents ate prunes, which were always called "stewed prunes." I understood that they did it for some vaguely shameful health reason, and I knew that I would never get so old that I'd order stewed prunes at a restaurant. So maligned are they that prune manufacturers have taken to marketing them as "dried plums," because plums aren't tainted fruit, as prunes are. Cherries aren't tainted either, so clafoutis is considered acceptable. But (non-stewed) prunes are delightful. Really, they are! Eating them won't make you old. (I was old before I ate them). In this recipe, they're cooked in water until the liquid has nearly boiled away. 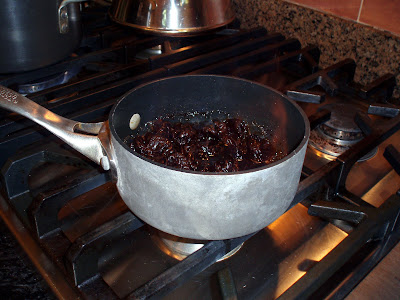 Then you pour on some Armagnac (or other brandy). I used Calvados, again opting for a product from Brittany's neighbor to the north. You light a match to the brandy, which flames up quite dramatically, but harmlessly. It's very difficult to get a picture of a flame; if you look very closely at the above picture, though, you can see a hint of a flame. (Contrary to common wisdom, it appears that flaming or boiling down alcohol will not remove all the alcohol from the food, so this is a dish that should probably not be served to someone who avoids alcohol). 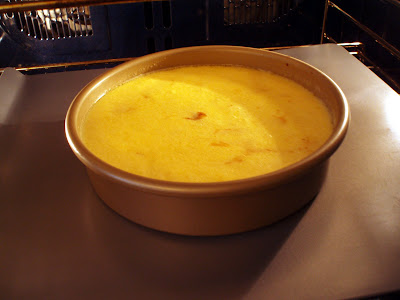 The custard/cake, however, is so wholesome that anyone, even a baby, could eat it: it's just eggs, butter, flour, milk, sugar, and a little vanilla. I used a recipe from epicurious.com, but there are many similar recipes available on the internet and in books. I followed the recipe exactly except that I omitted the raisins, so the dessert could be an unsullied ode to prunes. 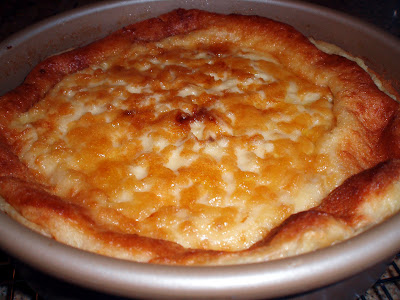 It came out of the oven looking poofier than a quiche and less poofy than a Dutch baby pancake. Perhaps some day I'll compare recipes and see if I can figure out what the poofiness factor consists of. 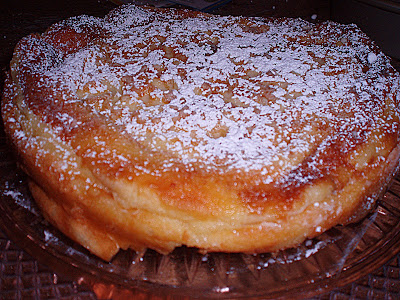 My dinner guests loved this--they asked for the recipe and declared that they too were now admirers of prunes. I served it with slightly sweetened whipped cream, which was lovely, but not essential: it would still be good on its own, unadorned but classic.
Posted by Marie at 3:41 PM 7 comments: 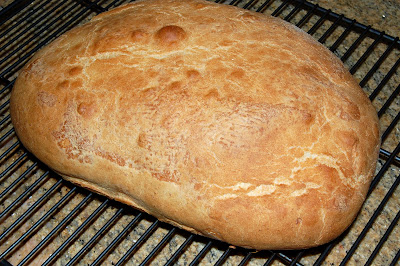 Another of life's lessons learned: if someone tells you that there is one ingredient you need to make your recipe perfect, but gives you some second-class substitutes, just go to the grocery store and buy the perfect ingredient, even if you're feeling too lazy to get in your car and drive to the store.

My friend Melinda Pickworthmade this bread - Peter Reinhart's Vienna Bread with Dutch Crunch Topping - in November of 2008 (right after Obama was elected president).  I wanted to make it as soon as I saw it.  This is how long it's taken me--maybe I'm not that great on follow-through.

The Vienna bread itself is an easy-to-make,  fine-textured white sandwich bread, which can also be shaped into rolls or buns. If you want to make the Dutch Crunch topping, you need rice flour, which I didn't have. Melinda made her bread in November of 2008, so you would think that sometime in the 2 1/2 years after I read her blog and got inspired to try it, I would have picked up some rice flour. Not true.

But, since you can substitute any number of things for the rice flour, I did, even though Reinhart warns that rice flour is most commonly used because it's "perfect for the job."  Meaning that the substitutions are less than perfect. 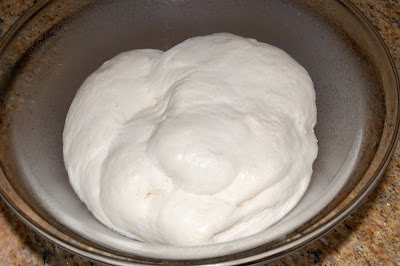 I said this bread was easy, and it is, but you do have to start it the night before you want to eat it. It starts, as do so many tasty bread recipes, with a pre-ferment that you make the night before, stick in the refrigerator, and bring to room temperature in the morning. On the second day, it's just a dump-everything-in-the-bowl, knead, and shape kind of bread. 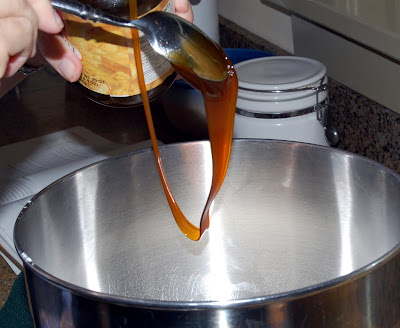 Vienna bread is different than French bread in a lot of ways. First, it's got a lot more ingredients than the yeast/flour/salt/water quartet that works such magic in a baguette. It's also got barley malt syrup, shown here in its sticky splendor, an egg, butter, and a little sugar. 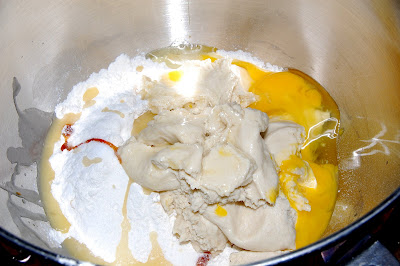 After this is mixed, kneaded, and allowed to rise, it's time to decide what kind of bread you want.

The recipe makes two one-pound loaves of Vienna bread (usually shaped into a batard), but you can make rolls with part of the dough, or you can make American-style loaves in loaf pans. I decided to make four three-ounce pistolets (miniature batards) and one large Dutch-crumb loaf.

What turns Vienna bread into Dutch crumb? A topping made from rice flour, yeast, sugar, salt, and water. (Or, if you can't be bothered to go fetch some rice flour, a mixture of cake flour and cornstarch). This mixture gets brushed on the shaped loaf, where it starts to bubble and burst. Frankly, it looks a little frightening. If made with rice flour, the contrast between the crunch and the loaf is supposed to be much more striking than in my picture--it's called tijgerbroodin the Netherlands, whence it comes, and should look like the markings on a tiger. 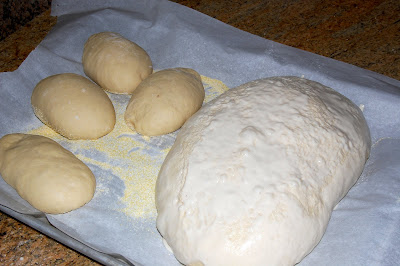 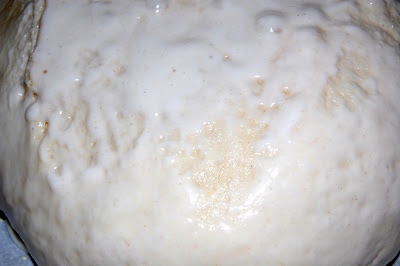 The rolls turned out pretty and golden brown. I used them as dinner rolls, but they could also be used for sandwiches. 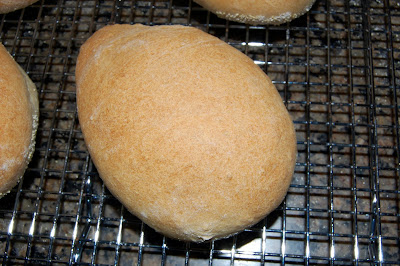 The bread's topping wasn't as pretty or as crunchy as the photo in The Bread Baker's Apprentice. I blame the lack of rice flour for the lack of perfection in the Dutch crunch, but it still formed a lovely crust--slightly sweet and toothsome, although not as firm as a baguette's crust. The interior was soft and even-crumbed--equally good for sandwiches and as toast. 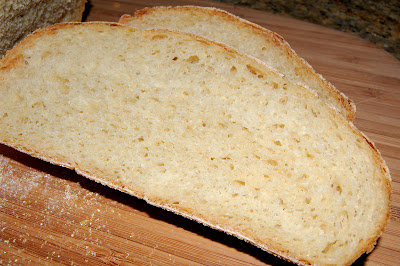 I'd like to thank the people at Channel 4 for naming Breadbasketcase one of their top ten bread blogs. Check out their list for some great-looking blogs.


Vienna Bread
from The Bread Baker's Apprentice, by Peter Reinhart

Mix together the flours with the salt and yeast. Then add the water while stirring until you have a rather 'shaggy' dough. You may need to add the extra water to bring it all together.

Remove the dough to a floured surface then knead it for a few minuted until the dough is smooth and slightly, not sticky. Place this dough in a lightly oiled bowl, cover and let it ferment for at least 4 hours at room temperature. Place in the refrigerator overnight.

1. Remove pate fermentee from the refrigerator, cut it into about 10 pieces then let it come to room temperature, covered, for about an hour before using it.

2. Stir together the flour, sugar, salt and yeast. Then add the pate fermentee, egg, butter and 3/4 cups of the water. Add extra water if needed, then continue mixing until you have a smooth dough. Knead with dough hook, or by hand, about ten minutes.

3. Place the dough in a lightly oiled bowl, turn to coat, then cover. Let it rise until doubled in bulk for 2 hours.

4. Shape the dough into rounds (big or little, depending on what you want your final product to be). Cover and let rest for 20 minutes.

5. Shape into batards, rolls, or loaves, and let rise until nearly doubled in size.


Preheat the oven to 450F. Just before placing the bread in the oven, place an empty pan in the oven and pour a cup of boiling water into it closing the door quickly.

Place the bread in the oven, reduce the heat to 400F. Continue to bake for 10 minutes. After 10 minutes, rotate the baking sheet to ensure even baking. Bake an additional 10-20 minutes, depending on size.

Cool on a rack to room temperature.
Posted by Marie at 8:39 PM 16 comments: