To the Other Side of the World 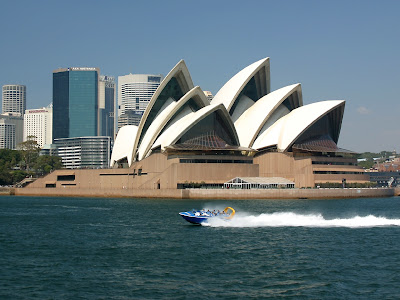 Sunday, May 11, 2008
A few weeks ago, I saw that Melinda,Pink Nest and Evil Cake Lady started their own internet baking club. I horned in on it, and begged them to let me join their projects, even though they baked a fancy cake with caramel and peanut topping that looked really hard. They said I could join, but they had already planned May's project, which was another cake that also looked quite hard. I told them they could always make fun of me if my cake turned out to be really lame.
Melinda named their group the Lazy Bakers' No Rules Club. My daughter Sarah came over for Mother's Day today, and I told her about the group. She said, "But Mom, you love rules!" It's true. But once a month, surely, I could be a no-rules kind of gal.
May's project is from Baking from My House to Yours, by Dorie Greenspan. This devil's food cake requires baking a cake (naturally) and then slicing the layers in half. (Help!) You also make a marshmallow-like frosting (Help again!), ice the whole thing, and then artfully glom on cake crumbs. The picture (it's the cover picture on the cookbook) is quite beautiful. (If you want to make this cake and don't want to buy the book, you can google the name of the cake and get lots of hits, most of which include the recipe). 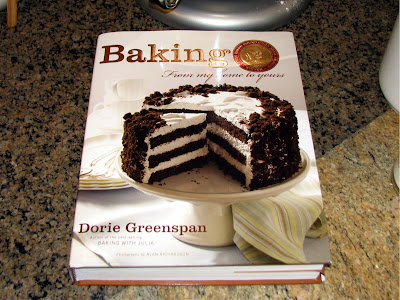 I tried to match the picture with my level of expertise at cake baking and decorating, and I couldn't. But I decided to slog ahead.
I had to buy some eight-inch cake pans. At Target, they were all out of eight-inchers, so I went to Williams-Sonoma instead. Maybe the shelves at Target had been emptied by people who went first to Williams-Sonoma and were appalled by the $18.50 price tag for the deluxe gold pan. That is $18.50 per cake pan. The lovely woman at W-S assured me that these pans would last me the rest of my life. That better be a good long time, I grumbled under my breath. 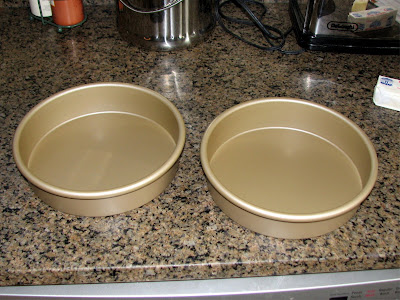 I decided to do everything exactly as directed. Normally, I would just spritz some Baker's Joy on the cake pans. But the recipe said to butter the pans, flour them, and then line with parchment. And so I did. Often when a recipe says to sift the flour, baking soda, etc., I ignore it. But today I sifted. Cake recipes that specify adding the dry ingredients in three installments, separated by two additions of milk, seem a little silly to me. But I obeyed. (Sarah pointed out that I was being a little rule-bound considering this was a No-Rules Club. I said I wished I was a little better at the no-rules thing, but maybe I'd improve as I went along). 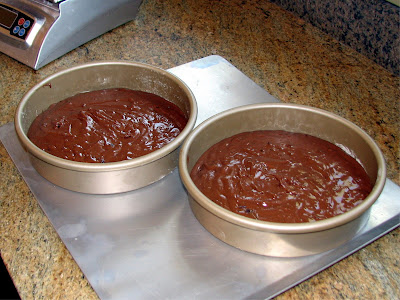 I was hoping that the layers would be nice and thick so that cutting them in half wouldn't be so scary. But they weren't. And it was really, really scary. I remembered an old trick about putting toothpicks along the middle of the cake layer to guide the knife. If I hadn't done that, God knows what I would have ended up with, but I did manage to cut both layers more or less in half. 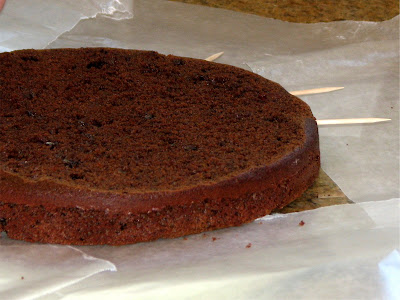 If the cake wasn't scary enough, there was still the frosting to contend with. Frosting that required a candy thermometer, boiling sugar, beating egg whites at the same time the sugar is boiling, and pouring the hot sugar-water into the beaten egg whites. I told Sarah that I had a bad, bad feeling. She said, "What are you worried about?" I said, "Everything. It's all going to be bad." She told me again that I was lacking the devil-may-care spirit implicit in the Lazy Bakers' No-Rules Club. 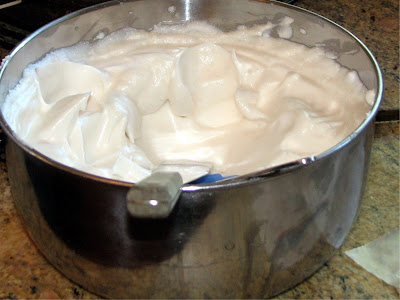 I'll admit the frosting turned out to be quite pretty. It has a whole tablespoon of vanilla in it; at first I thought it was too much, but it married well with the chocolatey, chocolatey cake (cocoa powder, melted bittersweet chocolate, and miniature chocolate chips). And, although I am not a good icer, the frosting was pretty easy to handle. 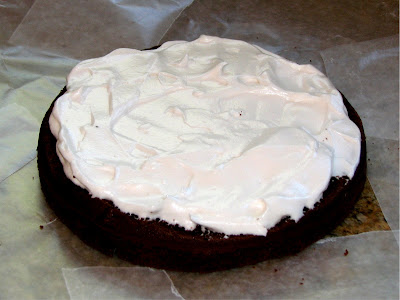 When the whole cake was frosted, I still had one layer to crumble, and throw on the sides. I was feeling a little giddy by now, and I really did want to throw the crumbs, but I just kind of patted them instead. 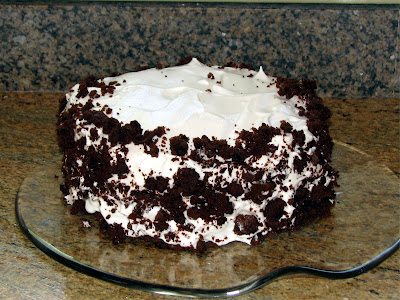 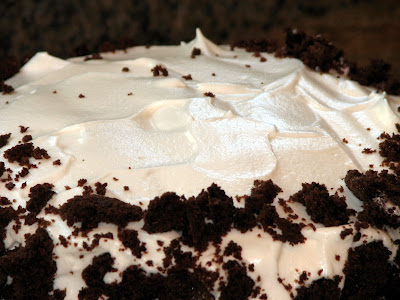 We all had a piece mid-afternoon. Actually, Jim had two, which is how I know he liked it. I restrained myself, but the rest has to go in to work, or I'll be in serious trouble. 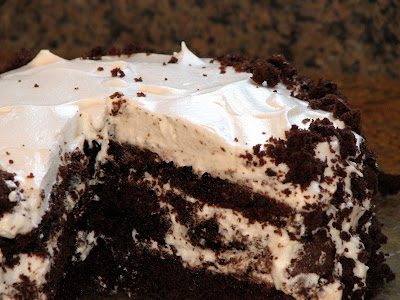 Saturday, May 3, 2008
Since I started baking, I've learned that the search for new recipes is divided into two categories: buttermilk and non-buttermilk. The buttermilk search is for when you have a half-used quart of in your refrigerator and MUST USE IT UP. Non-buttermilk is when you're free.
Buttermilk servitude is not the worst thing in the world. Most things you bake with buttermilk end up being pretty good. Still, would it really hurt to make it available in one-cup cartons? It's not like most people just glug it down.
So I got out The Bread Bible, and looked in the index under "buttermilk," where I found potato buttermilk bread. I was about to ignore it because, though I had buttermilk, I had no potatoes, butI remembered that it took potato flour instead of cooked potatoes. And I still had some potato flour. I heard Rose's voice asking me how old the potato flour was, but I ignored the voice because I didn't want to think about it. (I'm at the age where I feel a lot of empathy for anything or anybody that's considered too old. It's the only reason I'd think of voting for John McCain). 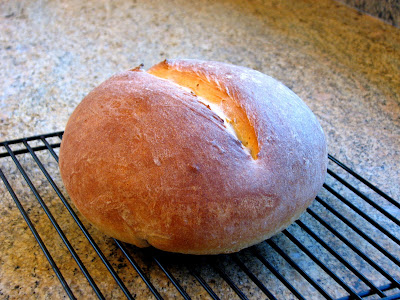 Ha! The too-old flour came through just fine.
This bread is pretty simple, but it does take some time, mainly because the biga needs to be made either early in the morning, or, preferably, the night before. Since I forgot to make it the night before, I was able to hurry things along just a little by using the "proofing" cycle on my beloved Wolf oven. I set it at 85, and it stays cool enough that I can put my plastic proofing bucket into the oven with no fears, but it's just enough warmer than my kitchen (in early May anyway) so that I don't have to worry about lagging dough. And we had the bread in time for dinner.
Usually, I prefer to have bread be the main course because it usually outshines whatever else we're having anyway, but I had dinner all ready to make so the bread had to play second fiddle. Since it was chewy, flavorful, and delicious, it didn't play the runner-up part all that well. I had a slice later that night with a glass of wine, and it was excellent. This bread has a much finer texture than the kind of bread you usually get in this kind of free-form round loaf, but it was a nice change. I hope my elderly flour is up to making one more loaf. 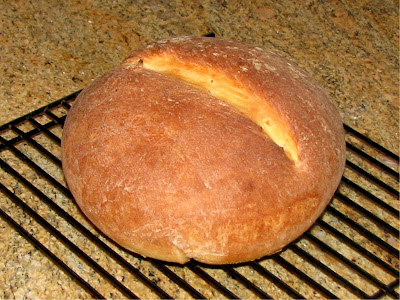