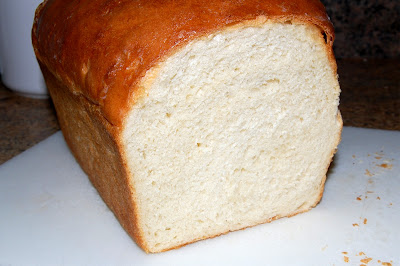 Although I was initially taken by this bread because of King Arthur's story about a British home baker named John Dyall, who wrote out this recipe and mailed it to King Arthur, it turns out that the bread should actually have been attributed to Dan Lepard, a noted British cook/baker/writer.

King Arthur has since added a parenthetical attribution to Mr. Lepard. I received several comments telling me about the mis-attribution, and a nice letter--not threatening to sue me--from Mr. Lepard's partner and business manager, inviting me to consider editing my post to clarify the genesis of this recipe.

The internet can be a morally iffy spot. While it's an amazing advance to be to have so much information at one's fingertips, a lot of the information is wrong, or, as in this case, incomplete. Baking is
both an individual and a collaborative effort; there is probably very little that is actually new under the sun. Still, I'm glad to credit Mr. Lepard for printing this recipe in The Guardian. But I would never have tried it were it not for King Arthur, which wouldn't have published it without its relationship with one John Lyall. So thanks to all, and I encourage you to try this bread. (By the way, I've now got a link to Dan Lepard's engaging blog on this site, and I encourage you to take a look at it). 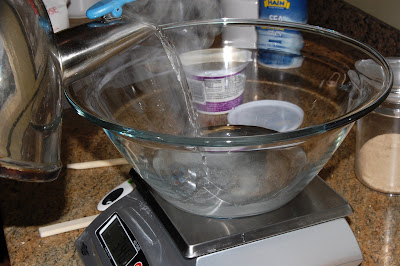 The recipe is a modified no-knead loaf, although it takes a modicum of kneading, and it's even easier, as it doesn't require all the hours of resting that no-knead bread does. It contains both cold water and boiling water, a little sugar, and a half-cup of sour cream--this mixture apparently provides a welcoming atmosphere for the yeast.

Flour, either white or whole wheat, is added to the mix and kneaded by hand--very briefly--until it makes a rough dough. 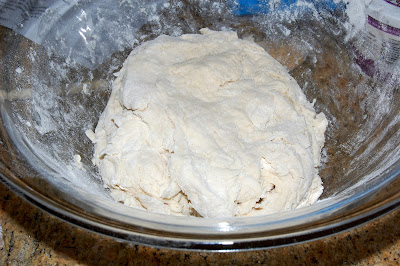 The dough rests for about 10 minutes. Then minimal kneading again (really minimal--about 10 seconds); rest; repeat. The three sets of brief kneading are enough to make it look like proper bread dough. 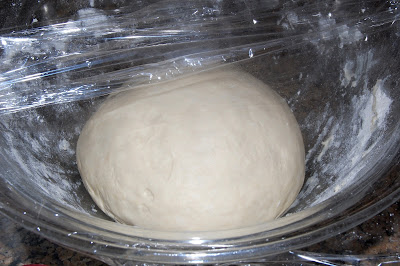 It takes only about an hour for the dough to double in size. The mixture of boiling water, cold water, and sour cream must be one where the yeast thrives because, even in a cold kitchen on a cold day, the dough is unstoppable. 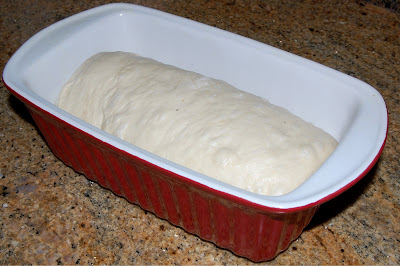 And it continues rising enthusiastically for another hour, until it domes over the top of the loaf pan. The oven spring is just as enthusiastic. Midway through the baking, I realized I'd better move the top oven rack up one notch or the bread was going to run right into it. 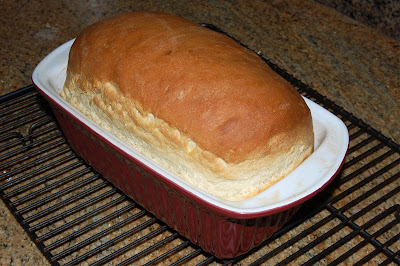 In addition to being easy to put together and relatively quick (it is a yeast bread, after all), this recipe makes an exceptionally good basic white sandwich loaf. Jim is a very good audience for freshly baked bread. The goodness of bread still containing a hint of warmth from the oven always seems to take him by surprise; his reaction was, "This is REALLY good bread--it doesn't even need butter."

It's not the crusty artisan bread that we all crave, but it doesn't pretend to be. And sometimes you just need an ordinary loaf of bread.
Posted by Marie at 9:33 PM 8 comments: