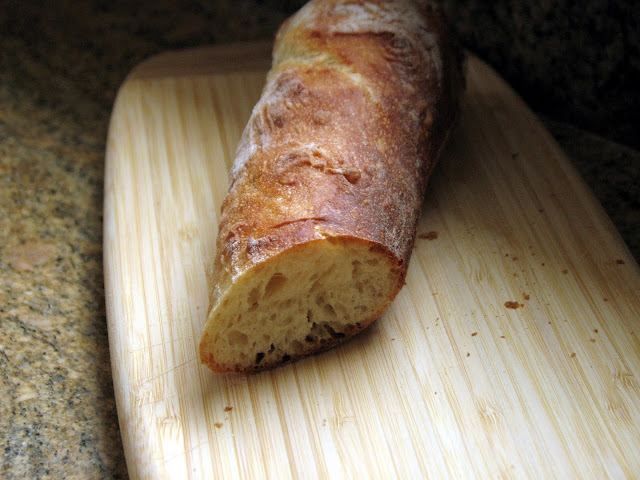 I think a l'ancienne means something like "in the old-fashioned, or traditional, style." But I like to think of it as "bread of the ancients," or even "bread for old people," which is right up my alley. Those ancients knew how to make bread.
Reader Paul has been urging me to try this recipe from Peter Reinhart's The Bread Baker's Apprentice. I wanted to try it, but when I looked at the recipe, I just didn't get how to shape it. As it turns out, you pick up the dough and it shapes itself. It's as if it has gone to obedience school. (Cakes, on the other hand, never go to obedience school. At least they don't graduate).
What the ancients like to do with bread dough is mix it up with ice cold water. This is very counter-intuitive, isn't it? Even though I don't proof my yeast any more, I still fear that too hot or too cold water will kill it, and I usually try to give it a nice, room-temperature water that won't shock its sensitive little system. But in this recipe you want to shock it. The idea is to make it ferment very, very slowly to develop flavor. 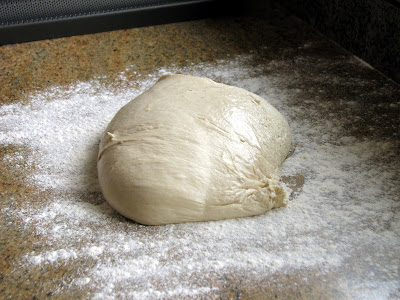 Here it is after being mixed with ice water and then put immediately in the refrigerator to retard its growth overnight. I let it rise for another three hours in the morning, and dumped it onto a well-floured counter. With more flour on top, it shapes easily into a rectangle. 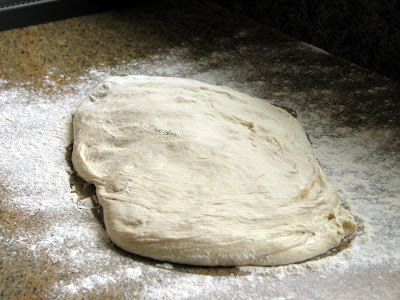 This rectangle of dough is cut into six pieces. I used three of them for baguettes, and put three in the freezer, in individual small ziplock bags, for later use--probably for pizza. At least, I'll try one for pizza and see how it works. 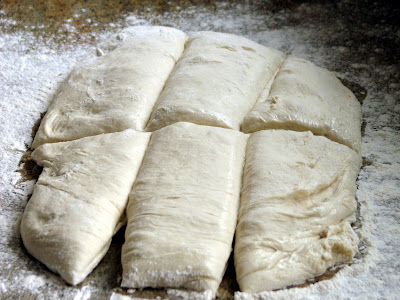 Now here's where I didn't understand what was supposed to happen. There are no directions for shaping the bread into baguettes, but once I picked up a strip, I saw why there was no need for directions. If you just pick it up, you barely even need to stretch it. It stretches itself and goes right into the baguette pan, practically of its own accord. 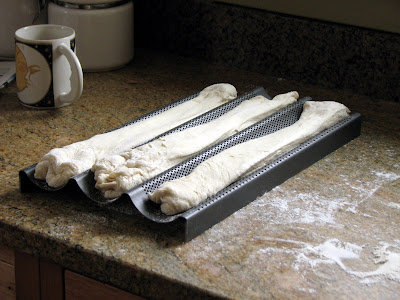 It really was the most remarkably docile bread dough, especially considering that it's a pretty wet dough. It was not quite so tractable when it came time for it to be slashed. In fact, Reinhart says that you can skip the slashing step if the bread is uncooperative, but I don't think you should skip it. He also suggest using scissors, but I thought the scissors were less effective than my usual little lame. 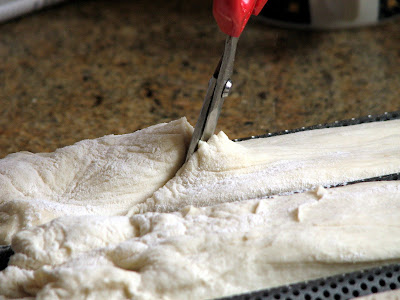 When you see the breads ready to go into the oven, you can tell which one was scissored and which ones were lameed. (Spellcheck is not going to like that word). 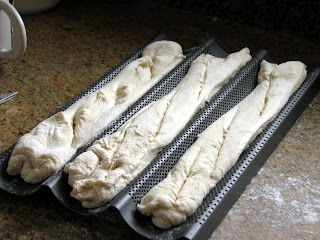 You know how wonderful the kitchen smells when bread is baking? Well, this bread smells even more so. 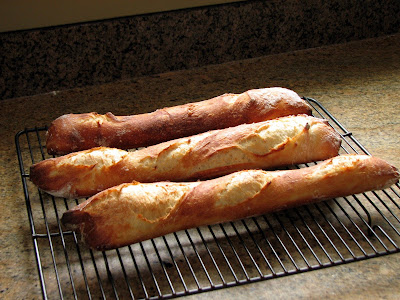 Good as the aroma is, the taste is better. The loaves have a toasted wheat flavor that's quite remarkable. Despite the length of the instructions in the cookbook (and below), it's a very easy bread to make. All you have to do is remember to start it ahead of time. It has only the one rising, most of which is done in the refrigerator.
Between this recipe and the food processor baguette recipe from Mark Bittman, there is very little excuse not to have a few fresh baguettes every week. Well, except for laziness and lack of planning. Since I suffer from both, I assume I won't be having the weekly baguette I'm trying to convince you to make.

A few other pictures, before the recipe. I haven't blogged for a few weeks, but I have been baking something every Saturday morning in January for the neighbors. Three weeks ago, it was caramel rolls. 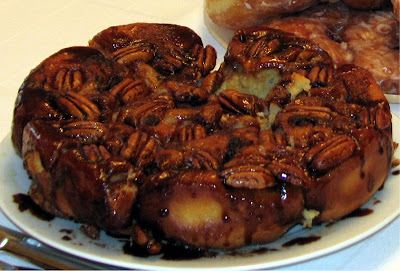 These were a big hit. The dough is from Artisan Bread in Five Minutes a Day, so all I had to do on Saturday morning was shape the day, fill it, and let it rise. (I still had to get up at 6:30, though, which is not my usual hour of rising on Saturday).
The next week, I wanted to do something easier, so I made blueberry muffins--a recipe I'd never tried before, from King Arthur. Although it's been my experience that muffins are the least popular of the January breakfast treats I make, these were eaten up within 45 minutes and roundly praised. 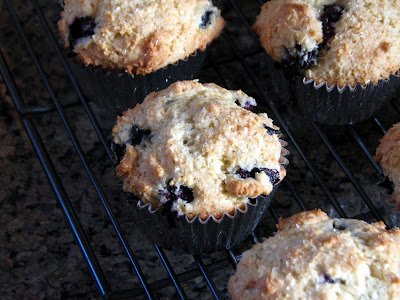 And now January is over, and the poor neighbors have to fend for themselves on Saturday mornings.


Pain a l'Ancienne
--from The Bread Baker's Apprentice, Peter Reinhart

Combine flour, salt, yeast, and 2 1/2 cups of water in the bowl of the electric mixer and mix for 5 to 6 minutes on medium speed. The dough should be sticky on the bottom of the bowl but it should release from the sides of the bowl.
Lightly oil a large bowl and immediately transfer the dough with a spatula dipped in water into the bowl. Mist the top of the dough with spray oil and cover the bowl with plastic wrap.
Immediately place the bowl in the refrigerator and retard overnight.
The next day, check the dough to see if it has risen in the refrigerator. It will probably be partially risen but not doubled in size. Leave the bowl of dough out at room temperature for 2 to 3 hours (or longer if necessary) to allow the dough to wake up, lose its chill, and continue fermenting.
When the dough has doubled from its original prerefrigerated size, liberally sprinkle the counter with bread flour (about 1/2 cup). Gently transfer the dough to the floured counter with a plastic dough scraper that has been dipped in cold water, dipping your hands as well to keep the dough from sticking to you. Try to degas the dough as little as possible as you transfer it.
Dry your hands thoroughly and then dip them in flour. Roll the dough gently in the sprinkled flour to coat it thoroughly, simultaneously stretching it into an oblong about 8 inches long and 6 inches wide. If it is too sticky to handle, continue sprinkling flour over it.
Dip a metal pastry scraper (or knife) into cool water to keep it from sticking to the dough, and cut the dough in half width-wise with the pastry scraper by pressing it down through the dough until it severs it, then dipping it again in the water and repeating this action until you have cut down the full length of the dough. (Do not use this blade as a saw; use it as a pincer, pinching the dough cleanly with each cut). Let the dough relax for 5 minutes.
Take one of the dough pieces and repeat the cutting action, but this time cut off 3 equal-sized lengths. Then do the same with the remaining half. This should give you 6 lengths.
Flour your hands and carefully lift one of the dough and transfer it to a parchment-lined pan, gently pulling it to the length of the pan. (Or, easier, use a perforated three-loaf baguette pan)
If it springs back, let it rest for 5 minutes and then gently pull it out again. Depending on your pan size, place 3 strips on the pan. Prepare another pan, and repeat with the remaining strips.
If you don't want to make all six loaves, divide them and refrigerate or freeze the remainining amounts. You can use them for baguettes, focaccia, or pizza.
Preheat the oven to 500°F and make sure to have an empty steam pan in place.
Score the dough strips as for baguettes, slashing the tops with 3 diagonal cuts.
Place the pans inside the oven. Pour 1 cup hot water into the steam pan and close the door. After 30 seconds, open the door, spray the side walls of the oven with water, and close the door. Repeat twice more at 30-second intervals. After the final spray, turn the oven setting down to 475°F and continue baking.
The bread should begin to turn golden brown within 8 or 9 minutes. If the loaves are baking unevenly, rotate them 180 degrees. Continue baking 10 to 15 minutes more, or until the bread is a rich golden brown.
Transfer the hot breads to a cooling rack.
Posted by Marie at 9:21 PM 22 comments: