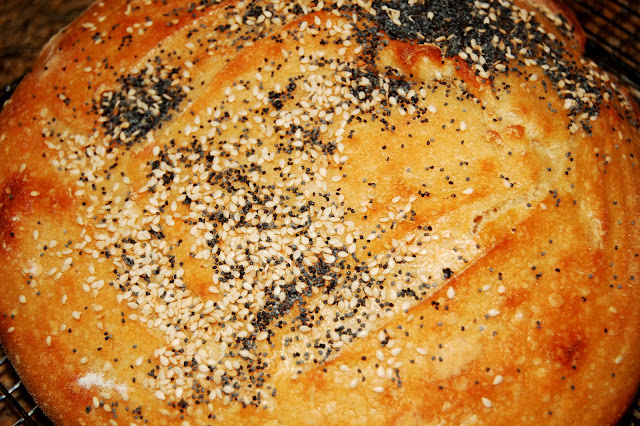 I made this just a week after my first Tartine bread, and am only just now finding a few minutes to write about it.  This bread was not as astounding as the first Tartine effort (although still quite good), and, looking at the pictures, I think I can spot several reasons why. 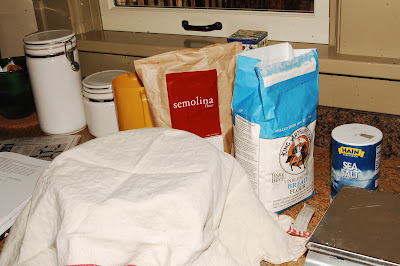 First, the semolina flour was coarser than I would have liked.  The Semolina Bread recipe does call for semolina flour - not surprisingly - but I remembered too late that Rose's semolina recipes all specify durum flour:  made from semolina, but lighter and finer.  I think that would have been better. 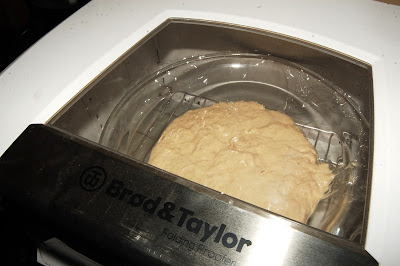 Second, although this bread method does give you large spans of unattended time, you really have to think through the timing, and you can't just run off mid-bread.  The initial rise requires "folding," which is this bread's kneading equivalent, every half hour.  And Robertson says you can't rush this period.  Unfortunately for me, I gradually realized that I was going to have to rush it a little because I was going to be gone from the house for a few hours mid-afternoon.  Going through the timing in my head, I concluded that I was either going to have to end Phase 2 after just 3 hours (the minimum time), or I would end up putting the bread in the oven at midnight. 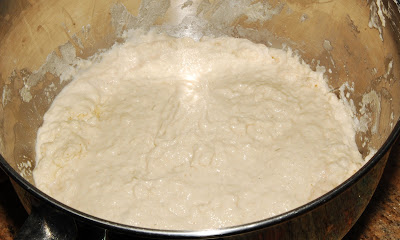 And, although I was surprised to see that my starter was very exuberant (after the first bread, I started keeping it in the refrigerator and feeding it only weekly or as needed for bread), three hours still wasn't long enough for the first rise. 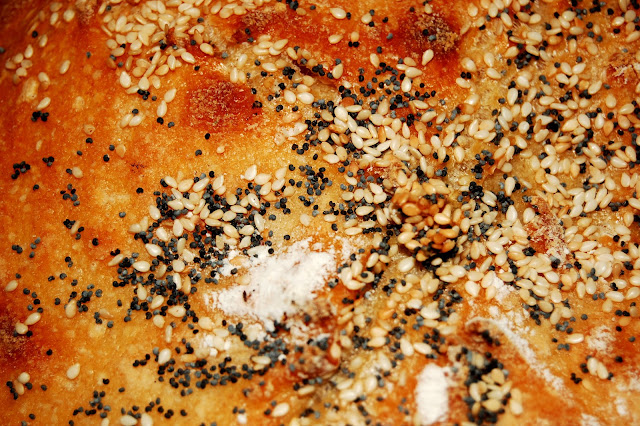 Third, I opted to use a mixture of sesame and poppy seeds only on top of the bread, while the recipe calls for those seeds, as well as fennel seeds, in the bread as well as atop the loaves.  I like fennel, but I didn't want two loaves of fennel bread--it's just too limiting.
Only as I write this does it occur to me that I could cut the recipe in half.  Duh.  I often double recipes, but I so rarely halve them that I just didn't think about it.  Making only one loaf at a time will also decrease the time spent on the bread.  Anyway, I think the bread would have been more flavorful if I'd incorporated some seeds into the dough, especially since most of the topping seeds fell off.

Finally, the step where you plop the bread dough into a burning hot pan didn't go well this time.  With both loaves, the dough didn't settle neatly into the pan, resulting in an uneven loaf.  Well, I suppose this isn't serious, but you'd like the bread to be beautiful rather than misshapen. 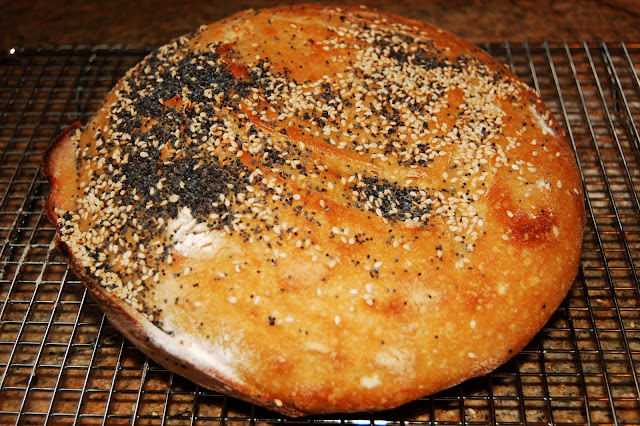 Jim, bless his heart, was trying to take pictures that didn't reveal that one side of the bread was an inch taller than the other side, and one side had a little ledge where it stuck to the side of the pan.  But you can see the objectionable shape in this photo. 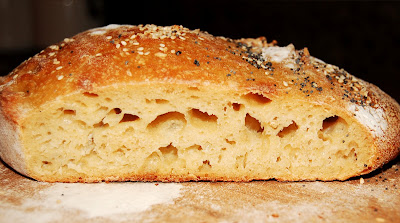 You can also see it in this picture, which shows that the texture of this bread is not as good as in the first loaf.  I think this is because I had to rush the first step.  (And remember that by "rush," I mean that it only sat around for 3 hours.)

Am I discouraged?  I am not.  But I am looking for a day where I have nothing to do but to check the progress of the dough in the first rise.  A lazy sort of day.  A don't-rush-me sort of day.  I hope I'll have one of those in January.  Which sounds like a fine resolution to make, and one that's more keepable than my standard "eat less, exercise more" vow.