Yesterday I wrote a whole blog entry about baking buttermilk currant scones and buttermilk bread to use up the rest of a quart of buttermilk. Today I read a comment from Melinda, asking for the recipe for the bread, so I was obligingly typing away an addition to the post, and talking to Elizabeth on the phone at the same time, and suddenly the whole post--pictures, comments, and all--disappeared.
Now I am very irritated at my computer, and at Blogger, but I am still going to try to type the damned recipe. 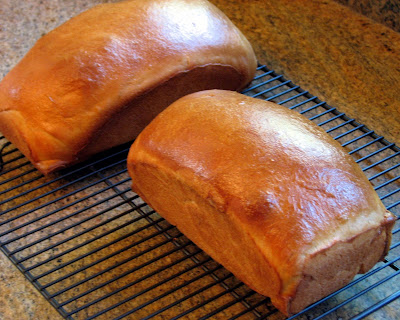 BUTTERMILK SANDWICH BREAD
(I'm just writing the recipe as given, but I modified it by using instant yeast, giving the dough a business-letter turn after the first rising and letting it rise a second time before shaping it).

In a small bowl, stir 1/2 c. of the water and the yeast together, add the sugar, and set aside until foamy. In a larger bowl, combine the buttermilk, remaining water, the honey, oil, and salt, then stir in the yeast mixture. Using the paddle attachment of an electric mixer, work in the flour a cup at a time until you have a shaggy, heavy dough that leaves the sides of the bowl. Turn it out onto a lightly floured counter and gradually knead in the remaining flour until the dough is smooth and resilient. Put it in a deep oiled bowl, turning it so that the top is oiled too. Cover with a towel and set in a warm place to rise until doubled in bulk,.

Deflate the dough by pressing down on it, then divide it into two equal peices and let rest for 10 minutes. Meanwhile, oil two bread pans. Flatten the dough into two rectangles the length of the pan. Roll it up tightly, pinch the seams together to seal the ends, and place in the pans, seam side down. Cover again and let rise
until the dough is just above the edge of the pan,. Preheat the oven to 375. Brush with the egg glaze (whisk one egg together with 1 T. cream) and bake until browned and pulling away from the sides, about 40 minutes. Set on a rack to cool.

The egg glaze makes the crust nice and shiny. 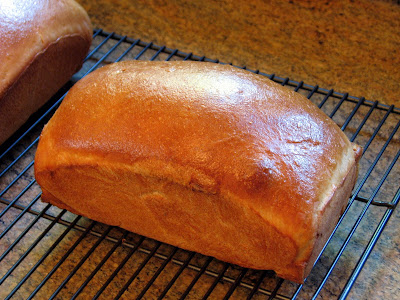 Saturday, September 8, 2007
First, a word about vegetables. As I've mentioned, I'm in a Crop Share program where I pick up half a box of vegetables every Thursday. I always thought I ate a lot of vegetables, but I have to say it's been a trial to get through all the ones I've picked up so far this summer. The boxes seem to be getting bigger every week, and it's getting harder and harder to make my way down to the bottom of the vegetable bin before I'm hit with another half-ton of organic wonders. Thus, we had end-of-the summer vegetable soup with pistou. I used broccoli, onions, carrots, potatoes, scallions, three kinds of peppers, tomatoes, parsley, kale, and basil. After all that, I still have eggplant (a challenge to disguise since Jim claims to hate eggplant), cabbage, more potatoes, more onions, and a butternut squash.
Well, of course, with soup, one must have bread. 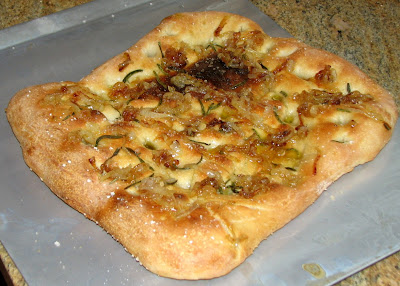 I'm always looking for new recipes from Rose, and found one on her website that I haven't made yet. (She really is going to have to get going on another bread cookbook). She calls this "fantastic focaccia." It's pretty much like a regular focaccia except it's made with sourdough starter, which I happen to have in my refrigerator, and caramelized onions, which I adore, and which offered a means of using up two onions. The recipe actually calls for a soft starter, but I just added a little more liquid to my dough and it was fine. It's really quite easy, and it has a great texture, with lovely, unevenly shaped holes.

Rose's technique for caramelizing onions is to steam them in olive oil on very low heat for a good half hour, then take off the lid, and slowly let them brown. Two largeish onions become reduced to less than half a cup of beautifully golden essence of onion-ness. The bread went perfectly with the soup, which I served with a big dollop of pistou (just like pesto only without the nuts). Jim ate a few bites of soup and pronounced it "wonderful." Then he bit into the bread and said, "This is better than wonderful." 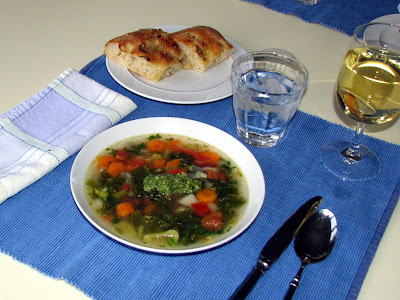 Now what the hell am I going to do with that eggplant?
Posted by Marie at 2:13 PM 11 comments:

Saturday, September 1, 2007
Potato-Onion-Rosemary Pizza
I still had four pieces of pizza dough in the freezer. 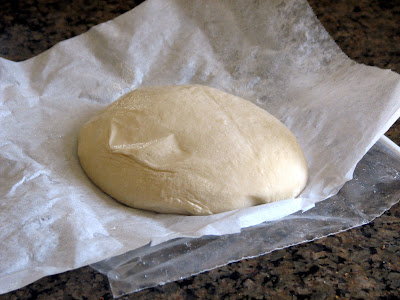 I had made one soggy pizza and one perfect one (no photos of the perfect one, alas--it's like the one that got away). After baking two pizzas, it was clear to me that I should not use a pizza pan if I wanted a crispy bottom crust. And yet, when I made this third one, I foolishly put it on the pan again. Why? Well, I'd run out of parchment paper, and the topping was so lush with olive oil that I was afraid to put it on the baking stone. I knew what was likely to happen, but I convinced myself that soggy pizza bottoms were a thing of the past.
This pizza is so simple--one new potato, sliced as thinly as possible, about half an onion, also sliced very thinly, some fresh rosemary, and olive oil, all tossed together. Spread on the pizza dough and sprinkle with sea salt. No cheese, no sauce, no tomatoes. And it would have been perfect, too, if I had not ignored my inner voice saying, "Don't use the pan! Don't use the pan!" The edge was so perfect, so crisp, so crusty. Limp in the middle, however. 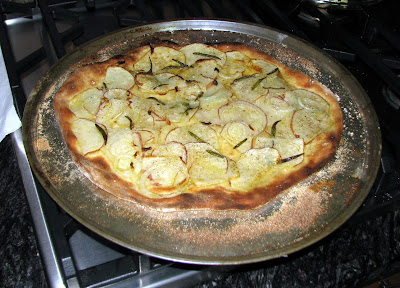 I've grown to be very fond of Carol Field's The Italian Baker. It's probably my favorite, except for The Bread Bible, of course, which is, after all, a bible. But Field's breads are all very hearty and flavorful. This rye bread, studded with bits of pancetta, is no exception. It's about half-rye, half-white flour, which makes it very dense--really more like a whole-wheat bread than a rye. When I tasted this bread, I realized how much I associated caraway seeds with rye--this has no seeds, and, hence, it doesn't taste much like traditional rye bread.
I used my bread steamer, and, since I had two loaves to bake, I experimented. On the first loaf, I steamed for only five seconds and kept the lid on for 20 minutes. On the second, I steamed longer (15 seconds) but kept the lid on for only 10 minutes. They look quite different--the second one (to the right) got browner and the flour pattern from the banetton doesn't show as much, although I put equal amounts of flour in both. I put the second loaf in the freezer, so, as Jim pointed out to me, it wasn't much of a taste test, but there was no way I was going to cut up two loaves of bread for two people. I do have some sense of propriety. 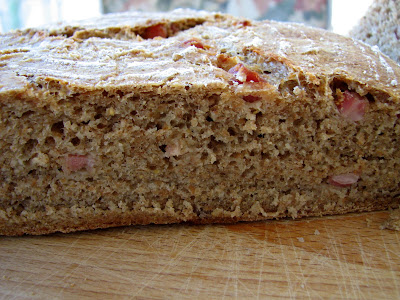 This bread is excellent with gouda, goat cheese and Zinfandel, which is what we happened to have on hand.
I wasn't sure how it would toast, which is always my second criterion for bread, but I had some this morning with an egg. Very nice! It was like having a bacon and egg breakfast without the bother of cooking the bacon. 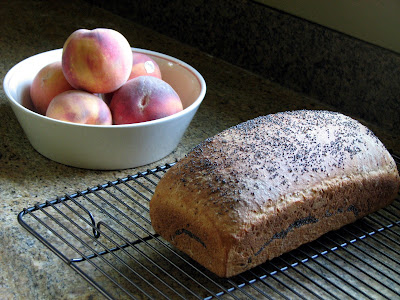 Monday's bread is from The Bread Baker's Apprentice, by Peter Reinhart. This "extraordinaire" bread is supposed to be the new, improved version of his struan bread, which seems to be a favorite bread with everyone. Rose's version of struan bread, which she has on her blog, caused her to write to Reinhart that this bread made her proud to be a bread-baker. It's not a complicated bread at all--it just has a little cornmeal, rolled oats, and wheat bran mixed in with a basic white bread recipe. I think the "improved" part just involves mixing the grains the night before with enough water to moisten them. This is supposed to make excellent toast, but, as of Monday night, I haven't tried that version. Because the tomatoes are plentiful, and because of the promised splendid toast, BLT's seem to be in my future. 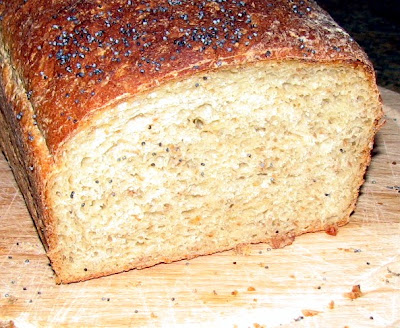 Here is what I learned about a three-day weekend. I can never retire! I baked (and ate) an insane amount of bread this weekend. Where I usually make one thing per weekend (manageable), I made three (messy and gluttonous). Work saves me from myself.
Posted by Marie at 5:23 PM 11 comments: