This is the first bread I've made from Advanced Bread and Pastry: a Professional Approach, by Michel Suas. It's a daunting book. I mean it's a TOME (over 1000 pages). And you have to read through the first chapters before you can bake--because the recipes assume that you've read everything--and you have learned more than you ever wanted to know about bread and pastry. Especially if you don't retain information the way you used to. Another clue that it's not just for the home baker is that the recipes make about 10 loaves, although Mr. Suas reduces the massive numbers to a more manageable "test loaf" (i.e., two loaves).

As I periodically skimmed the book (I'm not going to pass the midquarter, by the way), I kept coming back to this pear and buckwheat bread. It intrigued me because 1) I've never baked with buckwheat and 2) the dried pears soaked in white wine sounded quite yummy. And I realized it wasn't hard at all. So I got me some buckwheat and went to town. 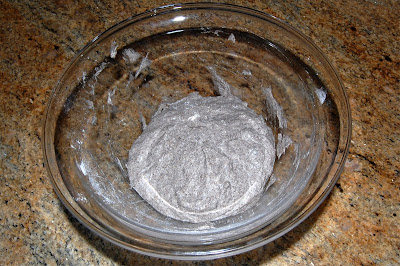 The first thing you do is make a buckwheat poolish--just a mixture of buckwheat flour, bread flour, water, yeast, and salt--that sits overnight. I almost threw in the towel after I saw the unappetizing color of the poolish--sort of a bluish black-gray. It didn't look like a food color. And that was a mere 1 3/8 ounces of buckwheat flour. But the rest of the bread was all white flour, so I hoped that the addition of more white flour would tone down the brackish looking mixture. 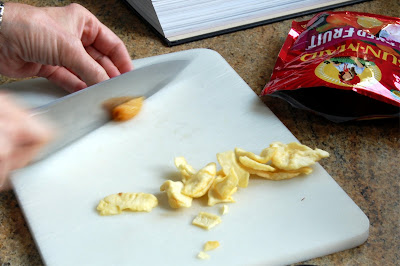 The hardest part turned out to be finding dried pears. I checked two grocery stores and a co-op; though there were many dried fruits, none of them were pears. Finally I bought some mixed fruit, and took out the pears. Not enough pears, so they had to be supplemented with dried apples. 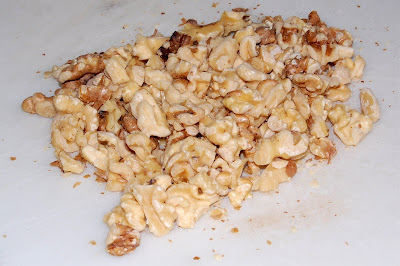 I toasted the walnuts and vigorously toweled off the skins. This extra step is supposed to make the walnuts less bitter. I don't think that walnuts taste bitter, but sometimes I add this step anyway--if I'm feeling worthy of baking from an "Advanced" cookbook, for example. 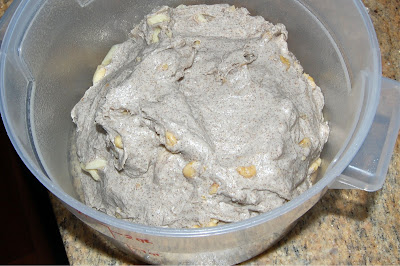 The poolish, which has been developing overnight, is mixed into the macerated dry fruits, walnuts, and more flour, yeast, and water. It's still an odd color (not the rich brown of whole wheat), but looks less offputting than before. As you may know, but I did not, buckwheat is not even related to wheat. It's a pseudocereal, which seems a bit harsh. It's also used as an upholstery filling, which seems even harsher. 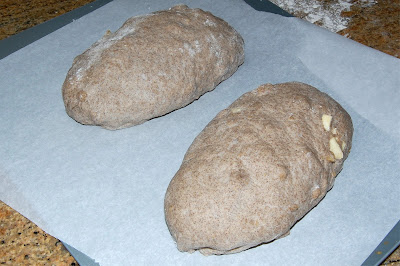 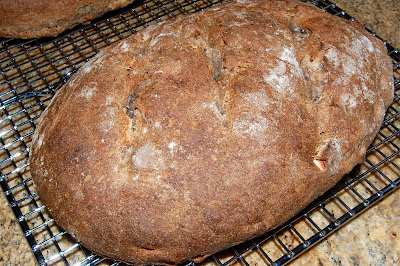 The loaves came out of the oven a nice mahogany brown, not the unappetizing gray they looked before baking. This turned out to be quite a successful bread after all. The crust was nice, and the crumb was delicate. The wine-steeped fruit added sweetness and character, and the toasted walnuts were unexpected but welcome. You could use almost any combination of fruit and nuts--cranberries and pecans would be nice, or raisins and hazelnuts.

I've got plenty of buckwheat left. I think it will next go into some buckwheat crepes, or galettes, a specialty of Brittany, where we're headed next week. This will give me a good excuse to try galettes all over Brittany.

I'll give you the recipe just as it is in the book, and you'll see what I mean about abbreviated instructions. If you've made bread before, the language will make sense. If you haven't, it won't.

1. Mix all ingredients until well incorporated.
2. Allow to ferment 12 to 16 hours at room temperature.