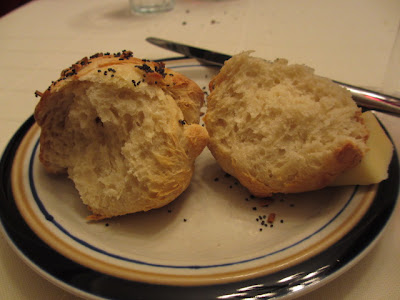 My friend and (sometime) fellow blogger, Chris from Rhode Island, recently asked me if I knew about The Fresh Loaf.
Well, in fact, I do know about it, but Chris's note reminded me that I hadn't visited the site for many months. So visit it I did, and came away with this recipe for Norm's Onion Rolls.

People on The Fresh Loaf raved about Norm's Onion Rolls. And I'm going to rave about them too, but I will say that Norm could write clearer recipes. And if I were a good and responsible blogger, I would make these several more times, and I would edit the recipe until it was understandable. But I'm not good and responsible, so I will link to the recipe as is, and if you make them, you'll probably have the same questions I did, but since mine came out just fine, I'll bet yours will too. 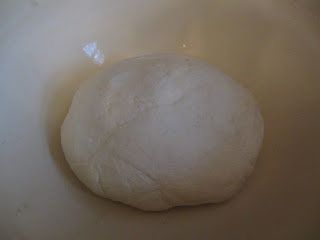 This makes a very thick dough. In fact, my trusty KitchenAid stopped dead in its tracks. I quickly turned it off, hoping that it would recover. I haven't re-tested it yet.

Oh, this is bad. After I wrote that sentence, I decided I couldn't keep myself in the dark about whether I had a working stand mixer. So I went to my kitchen to try it out. It's not working well. Now I've put Jim in charge of seeing if he can use his duct tape method of repair to fix it right up. Otherwise I might have to tell him that he'll be getting a new Kitchenaid for Christmas. (I already have my presents picked out, so I'm afraid it will have to go on his list. That's what happens when you're slow to make your list). 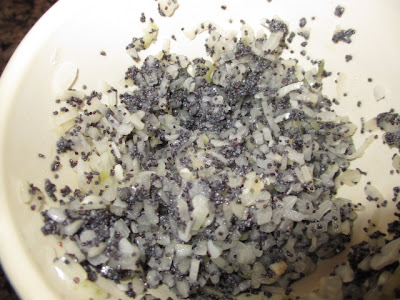 But before you get to the dough-rising stage, you have made the onion mixture. Oddly, you don't want to use real onions. Instead, you buy a jar of dehydrated onions, which you would probably normally not consider using in real food. At least this is what Norm recommends, and so it's what I did. You soak the dried onions for a while, then drain them, reserving the onion-soaking water for the bread dough. 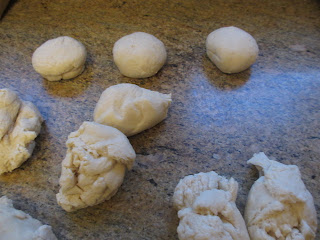 Then you divide the dough into 3-oz. or 4-oz. balls, depending on how big you want your rolls. Mine were in the neighborhood of 4 ounces, and I got 13 rolls. At this point, the recipe got a little unclear. You make mini boules, and, at some point, you let the dough rest again. I couldn't tell whether Norm wanted me to let the dough rest before shaping it into boules, or after, or at what point he thought I should cover the dough with the onion-poppy seed mixture. I shaped them first and let them rest for 20 minutes or so.

Also, the recipe says to use your thumb to make a dimple on top of the rolls. I thought that meant I should put the filling inside the dimple. But I think I was supposed to flatten the dough while pressing the roll into the onion mixture and then make the dimple. I now believe that the dimple actually has no utilitarian value (such as serving as a nest for the onions)--it's just the way it is. But I could be wrong. Perhaps if someone who is familiar with these New York-style rolls reads this, they can give me some advice, preferably not beginning with, "Breadbasketcase, don't you know how to read?"

This is what they looked like going into the oven: 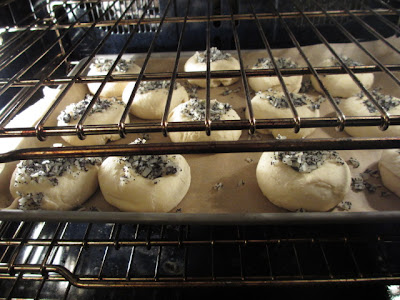 And this is what they looked like coming out: 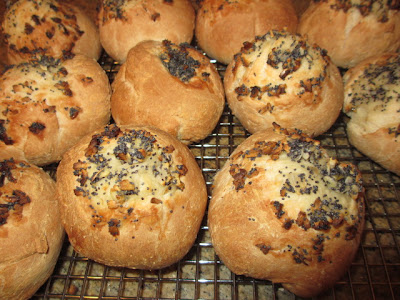 These are not ladylike rolls. Even if you made them smaller, there's something very hefty and satisfying about them. If I had flattened them more, and pressed the onion mixture into the top of them, they would have been perfect for sandwiches. But as long as I didn't wonder how they compared to Norm's rolls, which have reached a nearly mythic stature among readers of The Fresh Loaf, I liked them exactly as they were--round, savory, and toothsome.
Posted by Marie at 9:23 PM 8 comments: