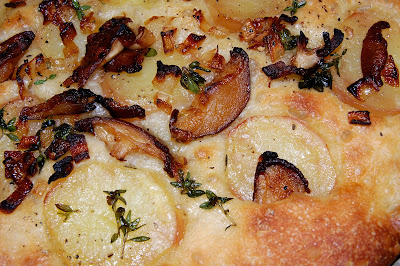 The full name of this flatbread, taken from epicurious.com, is "Flatbread with Fingerling Potatoes, Shitake Mushrooms, and Truffle Oil." I drizzled it with olive oil instead of truffle oil, because I don't like truffle oil. A few years ago, I splurged on a little bottle of truffle oil, and thought it had a very unpleasant taste. I figured it was just my lower-middle-class upbringing showing, and I was a Philistine who didn't appreciate the finer things in life. Then I read that truffle oil is not olive oil infused with truffles, as you might think (and as the truffle oil purveyors certainly want you to think), but, instead, it's olive oil infused with chemicals. Yes! I was vindicated. It's not that I don't like truffles--it's just that I don't hanker after 2,4-dithiapentane. 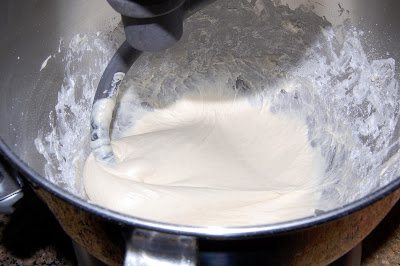 About half the comments to this recipe said it was unworkable because there was a mistake in the recipe--too much water, too little flour. Well, that was a challenge I wanted to take. I mixed the ingredients for that flatbread as directed, and came up with gruel. Definitely too much water. I gradually added flour, tablespoon by tablespoon, until I got a dough that still quite liquid but more or less manageable. 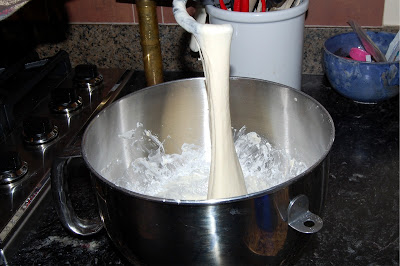 I ended up mixing it for almost 20 minutes (instead of the 10 minutes in the recipe) to get it "elastic but still sticky." It was very elastic. 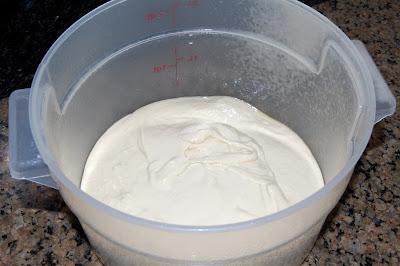 A very nice thing about this bread is that you can put it in the refrigerator immediately after making it, and let it do its very rise overnight.  In fact, I didn't take it out of the refrigerator until mid-afternoon, so it would be ready around 5:00--in time for cocktail hour.
By then it had more than doubled in size. 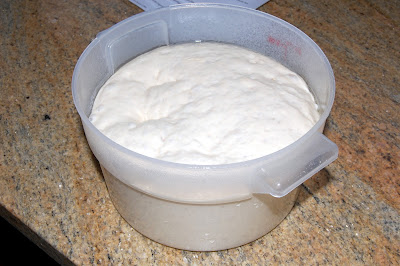 At first blush, it might seem that potatoes and bread = carb overload. But I say there's no such thing as carb overload. I also say, what about the famous Sullivan Street Potato Pizza? And what about the classic Italian dish consisting of pasta, potatoes, and pesto?
The recipe specifies fingerling potatoes. In a pinch, you could use another kind, but a baking potato would probably be too mealy and a new potato not soft enough. The fingerling is actually just right. 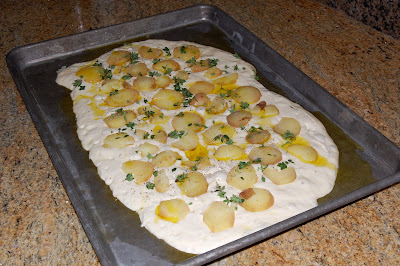 Fresh thyme, sauteed shitake (or other) mushrooms, and plenty of olive oil (or truffle oil, if you like that kind of thing), and it's ready to go into a hot oven. 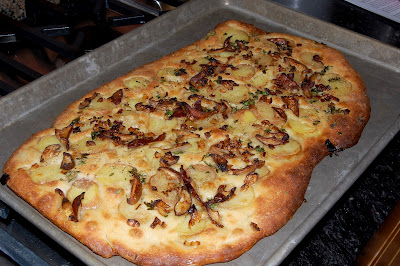 15 minutes later (the recipe says 20 to 22), it's ready to come out. The crust is phenomenally crusty and brown; the potatoes al dente, and the mushrooms sizzling. Most of the thyme remains green, but there are crispy bits of the herb as well. 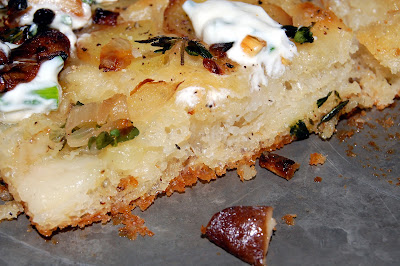 Then the finishing touch--dabs of creme fraiche and thyme. Oops. I had half a carton of creme fraiche in my refrigerator--not yet at its expiration date--but when I opened it, I saw that there was some white fuzz on top. Thinking that white-fuzz topped flatbread did not sound very appetizing, I tossed the creme fraiche and used sour cream instead.

Creme fraiche would probably have been better, but sour cream was good enough. Or just skip the whole bits-of-cream idea and serve the flatbread as is when it comes out of the oven. Anything made with a dough this liquid requires a leap of faith: is this really going to work? But if you have faith (and modify the recipe somewhat, either using less water or more flour), you're rewarded with a wonderful appetizer. Be careful, though--you may eat so much that you've no appetite left for dinner.
Posted by Marie at 9:54 AM 11 comments: