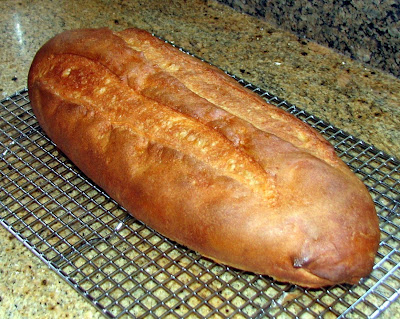 This is a recipe from one of my newer bread cookbooks--one that's been out of print for a while, and I finally just ordered it for myself: The Village Baker, by Joe Ortiz. 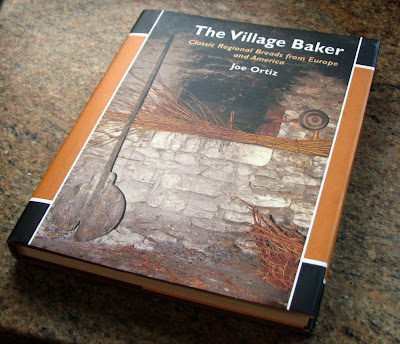 I've seen good reviews of this book, which was one of the earliest of the recent spate of books on artisan bread baking. (Compare the 1993 date of The Village Baker to the 2003 publishing date of The Bread Bible). Ortiz has some great stories about traveling around Europe talking to (what else?) village bakers. Unfortunately, Ortiz gathered up the European recipes and painstakingly translated all the weights into volume measurements. Scale snob that I've become, I was dismayed by this. If I want to try the recipes, I may have to go through the book and re-translate into grams.
The reasons I picked this recipe were: 1) It's a simple, direct-method dough that requires nothing other than flour, water, salt, and yeast; and 2) it directs you to whack the bread violently about 100 times with a rolling pin. It "helps to break down the gluten." (I'll just bet it does). It is also supposed to give the bread a very uneven texture. 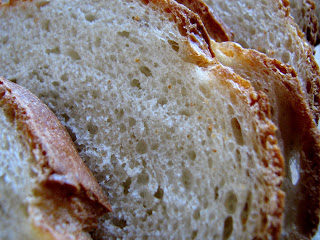 I wouldn't call this a "very uneven" texture, so perhaps I didn't whack hard enough, although I certainly gave it my all. 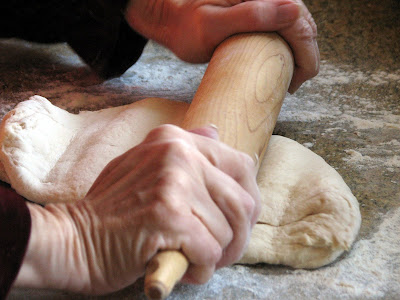 You can't really tell from the still photos how enthusiastically I'm whacking the bread with the rolling pin. It might have worked better if I'd had the handleless French kind instead of the American pie-rolling-out kind. After all, it is a French bread. Although I may not have ended up with the uneven texture I was supposed to have, I will say that the whacking technique brought that dough into line. 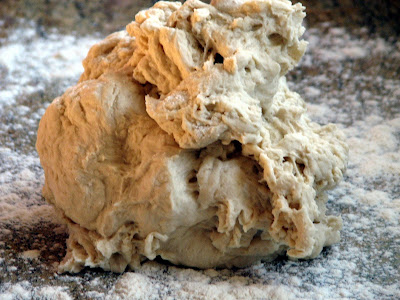 This is what the dough looked like when it came out of the food processor, before getting assaulted. 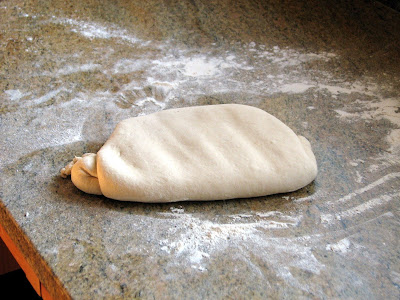 And here is what it looks like after being punched into docility.
After the bread rises in its shaped form, it gets double-slashed. 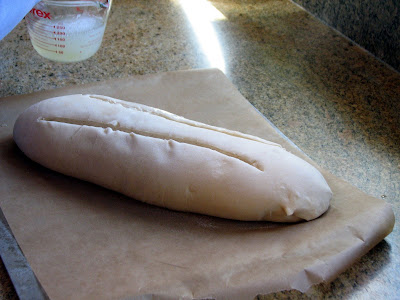 And then it's glazed with a very diluted (one-half cup water and one egg white) egg white mixture. 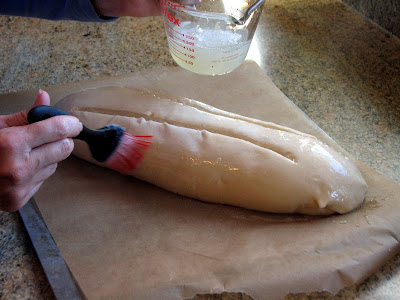 I usually glaze with a slightly diluted egg yolk, so I wondered what the difference was. It turns out that an egg white glaze gives you a less shiny and not as dark loaf of bread. I prefer the result from the egg yolk glaze, which is shinier and more dramatic.
This compagnon (it means companion or company: synonyms include compère, camarade, condisciple, confrère, collègue, maître, intime, copain, complice, amant, associé, baron, collaborateur, acolyte) is a good basic bread, although the only thing truly extraordinary about it is that you attack it with a rolling pin. I can tell you that that will get the full attention of anyone who's with you in the kitchen, and that that person will be nicer to you the rest of the day because he's not completely sure what you may do next with the rolling pin.

Direct-Method Compagnon
--from The Village Baker, by Joe Ortiz

Mix yeast and 3 cups flour in food processor fitted with plastic blade. Pour 1/4 cup cold water in food processor and pulse two or three times. With the motor running, slowly add 3/4 cup water and process for 30 seconds. With the processor still running, slowly add the rest of the water. Sprinkle the salt onto the dough and process for another 15 seconds. Add all but a handful of the remaining 1/2 cup flour, a little at a time, and pulse a few times.
Sprinkle the remaining flour on a countertop, and pour the dough out onto the table. Beat it vigorously about 100 times with a wooden rolling pin, folding the dough over onto itself several times. If the dough is too sticky, add a little more flour. After the dough is beaten, it should be moist, elastic, and satiny.
Let the dough rise in a covered bowl for 45 minutes. Put it on the counter, press it into a rectangle, and fold it over, business-letter style. Return to bowl and let rise another 30 minutes.
Flatten the dough and roll it into a tight, oval loaf or divide it in two and make two small loaves. Place the loaf, or loaves, on a parchment-lined baking sheet, cover with a towel, and let rise for 1 1/2 hours.
Slash two long, parallel cuts on the top of the bread. Glaze the loaves and place them in a preheated 450-degree oven. Immediately spray the oven with an atomizer filled with water. Bake a large loaf for 35-40 minutes and small loaves for 25-30 minutes.
Remove when crust is golden brown. Cool on a wire rack.
Posted by Marie at 6:03 PM 9 comments: 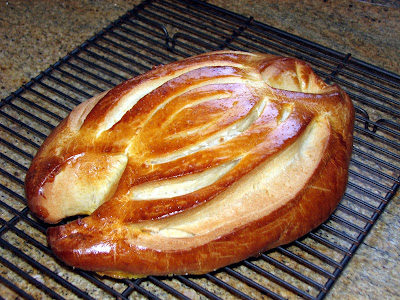 This is a Lazy Bakers Project. Melinda is always telling me I'm not lazy enough to be a proper Lazy Baker, but I guess I'm showing her that my laziness bows to no man's. Or woman's. She has already posted hers and so has Oriana. Thank goodness Evil Cake Lady has a yeast phobia, or I would have to be last, and how my stubbornly competitive self hates to be last! (Sorry, ECL).
This bread comes from a most intriguing cookbook called Warm Bread and Honey Cakes, by Gaitri Pagrach-Chandra. If you leaf through this book, you'll wonder where on earth Pagrach-Chandra hails from because it contains such an oddly eclectic mix of recipes. It turns out that "where in the world" is pretty much right because she's got roots or connections all over the world. (She is of Indian ancestry, educated in North American and Europe). She's also an expert on Dutch baking, and is the author of the infamous speculaas-speculum cookie recipe that was another Lazy Bakers project. 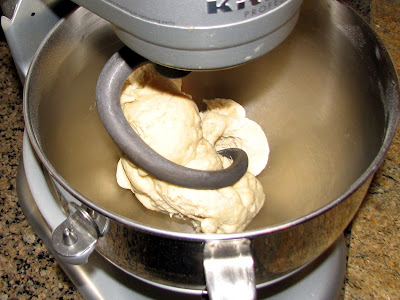 This recipe makes an extremely stiff dough. I've been making baguettes and Italian breads lately, so I've become accustomed to the very soft and wet doughs that result in big holes. While the wet doughs have their own shaping problems, I thought this dough was hard to work with because it's so solid. I ended up working more milk into the dough as I kneaded it, but I still thought it was difficult to handle. 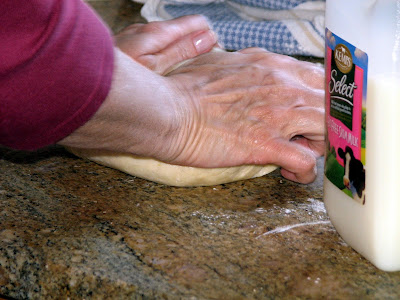 Once I added enough liquid to make the dough more malleable, I just had to let it rise. 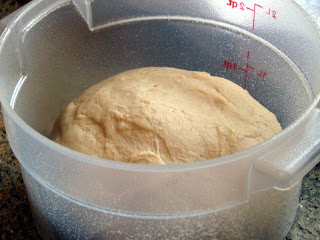 I checked it after one hour. No movement at all. After two hours. No discernible change, even though there were two teaspoons of yeast in the dough. I began to wonder if I'd forgotten the yeast, but I distinctly remembered measuring out the yeast. Was the kitchen too cold? No, the sun was actually shining brightly and the kitchen was warm. After four hours, I was running out of time, so I decided it was good enough. 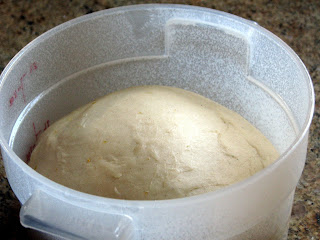 As I look at the pictures, I don't think it had doubled even after four hours. 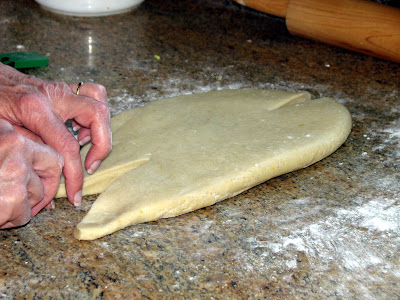 You roll the dough out into a ten-inch-long rectangle, and then make cuts on both ends. You stretch the pieces you've cut into legs. I can see that my legs were not long and lovely as they should have been; I made short, stumpy legs. Then the legs are rolled up. 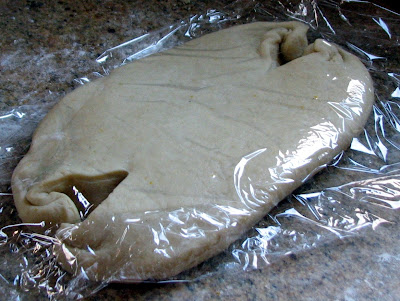 My short, stumpy legs (that is, my bread's short, stumpy legs) turned into misshapen lobster claws. I envisioned these legs as turning into lovely, graceful violin scrolls, but they didn't quite make it. Then I waited again for some upward movement from the dough. We were going out for dinner with friends, so I was running out of time, and had to hope that oven spring would make up for what wasn't happening with the dough.
Next step: egg wash and a whole lot of decorative slashing. It was pretty easy to cut the dough with a razor because it was still pretty stiff. I don't know why I have no pictures of this part of the process. 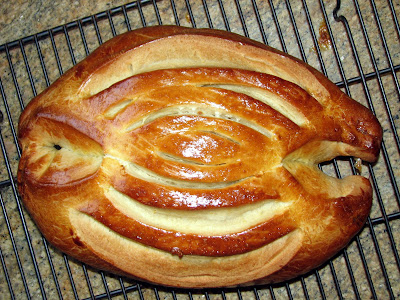 Melinda suggests that if you want a really brilliant shine, you should do two separate egg washes, waiting for the first to dry before you apply the second coat. This is one reason that her bread looks better than mine.
I didn't have any bread when it came out of the oven; instead, I waited dutifully until the next day to eat it, when the flavor is supposed to have mellowed. Even though I had my doubts about this bread all the way through the process, I actually liked it quite a lot.
The texture is fine, but still rustic-looking. 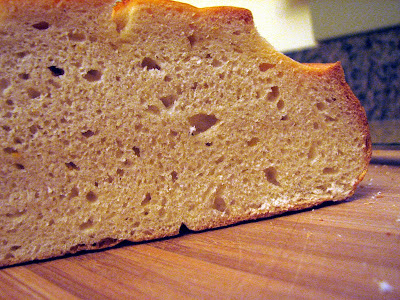 The spices in this spice bread are nutmeg and cardamom, with some lemon peel for fruity interest. I thought that the cardamom overpowered both the nutmeg and lemon zest. I didn't object to this because I like cardamom, but I would have preferred a more balanced taste. Because of the spices, the shaping, and the lengthy rising time, this is not a bread you'd want to have as your regular sandwich bread, but it's nice for a tea bread or just a change of pace. I have a practical objection to the ends of the bread, though (remember those rolled up legs?)--when you slice the bread, the ends fall apart into little bits and pieces of bread that are hard to do anything with. They also fall to the bottom of the toaster and can't be extracted, which is quite annoying when it happens first thing in the morning.
I believe that both Oriana's and Melinda's versions were aesthetically superior to mine, and the picture in the cookbook is quite amazingly beautiful. Even a second-rate version is impressive. (The pictures don't do it justice). If you want to impress people with your skill as a bread baker, this might be just the ticket.

Method:
Put the flour, yeast, sugar, salt, lemon zest, and spices in a large bowl. Add the milk, butter and beaten egg and mix with a spoon or spatula until the dry ingredients are well moistened.
If you are kneading by hand, turn out onto a floured surface or silicone mat and knead until elastic.
Alternatively, use a heavy-duty mixer fitted with a dough hook and knead for about five minutes, or until elastic.
Shape into a ball and place in a large bowl. Cover with plastic wrap, and leave in a warm, draft-free place until doubled in bulk.

Cover a baking sheet with parchment.
Transfer the risen dough to a lightly floured surface. Knead until once more smooth and elastic. Roll out to an elongated oval shape, about 25 cm/ 10 inch long.
Make a cut at the top, about 10 cm/ 4 inch long. Make a similar cut at the bottom.
Place on the baking sheet. Twirl the the cut pieces between your fingers to lengthen them a little.
Coil then inwards into a spiral. You will have two spirals at the top and the bottom.
Cover loosely with lightly oiled cling film and leave in a warm, draft-free place until almost doubled in bulk.
pre heat the oven to 350.
Brush well with beaten egg and use a very sharp knife, or razor blade, to score a decorative pattern into the top. A series of shallow semi-circles goes well with the shape. Start in the middle, making the cuts the shape of a parenthesis- ( )- and then make 4 or 5 parallel cuts on either side.
Bake for 30 -35 minutes. The loaf should be a rich golden brown with the scored pattern much lighter. To test, tap the loaf sharply on the top and bottom; it should sound hollow.
Cool on a wire rack.
Posted by Marie at 12:01 AM 11 comments: