Sunday, July 26, 2009
As thrifty bakers know, buttermilk always has to be used up. Buttermilk was an ingredient in the Red Velvet Cake I made over at Heavenly Cake Place, so that meant I had to find at least one more buttermilk recipe. This recipe, one of three variations on Peter Reinhart's basic white bread, uses a cup and a half of buttermilk, so it serves the purpose very well. 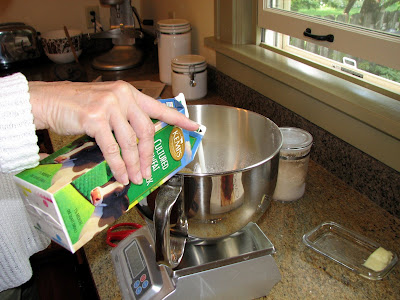 Plus it's just an excellent, easy to put together, soft-crumbed white bread. And if you added red food coloring, I guess it would be a soft-crumbed red bread.
(Out of curiosity, I Googled "red bread," just in case there was such a thing. I didn't find it, but I did find that one of the accusations made at the Salem witch trials was that the so-called witches "ate red bread like man's flesh." There's also an out-of-print book called Red Bread that's an account of a Russian-born journalist's return to his native village after it had been collectivized in soviet Russia. Also, here is a very intriguing loaf of bread, made with dough colored with beets, spinach, and tomatoes.)
But I digress.
This is another easy, mix-it-all-together bread. To show you what a few hours of fermentation does to a dough, here it is after it's just been mixed together: 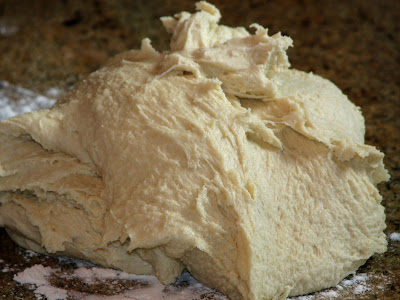 And here it is two hours later: 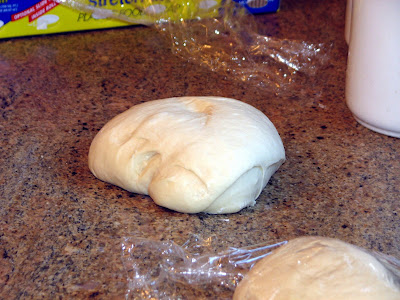 (The dough is divided in half because it makes two loaves of bread, 18 dinner rolls, or a dozen hot dog or hamburger buns).
I decided to bake two loaves, but I wanted them to look different, so I put one in a loaf pan and one I made into a free-form boule. For a shiny crust, I brushed on an egg wash, but you could also leave it bare or brush on melted butter. It's a highly versatile bread. 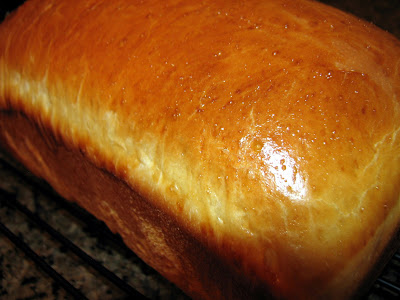 It's amazing how much sheen a little egg wash can give to a bread. For the boule, I decided on a starfish pattern: 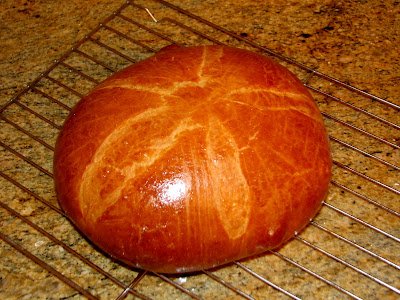 I wanted the bread to look shiny all over, so I slashed the bread and then covered it with egg wash. If you want the slashes to be more prominent, you could slash first and wash second. (I wonder if "Slash First, Wash Second" could be the title of a crime novel?)
I didn't want to eat two fresh loaves of bread, so I decided I would just give one loaf of bread away to the person who walked in the door first. Fortunately, it was not a burglar because that would have been a peculiar transaction. Instead, it was my daughter Sarah, who was delighted to take take a loaf home. She chose the standard-edition loaf and not the freeform starfish pattern, but she said it was not an easy choice.
Every now and then, I bake a kind of bread that makes me think I should enter it in the state fair. This is one of those kinds of bread: down-home, wholesome, easy, and pretty. I had it plain, in a sandwich, and as toast, and it excelled at them all. The bread also smells especially tantalizing while baking.
If I had a bottomless container of buttermilk, I might make this regularly. Since I don't, though, I'll probably go on to something else next week. In the meantime, here's the recipe, from The Bread Baker's Apprentice, by Peter Reinhart.

1. Mix together the flour, salt, sugar, and yeast in the bowl of an electric mixer. Pour in the egg, butter, and buttermilk, and mix on the low speed of the mixer with the paddle attachment until all the flour is absorbed and the dough forms a ball. (This can also be done by hand).

2. Change to the dough hook, and, adding more flour if necessary, mix on medium speed for six to eight minutes, or until the dough clears the sides of the bowl. Lightly oil a large bowl, roll the dough in oil so that it's all lightly covered, and cover the bowl with plastic wrap.

5. Shape into whatever shape you want to use, cover with plastic wrap, and let rise another 60 to 90 minutes, or until doubled. Before the dough is doubled in size, preheat the oven ro 350 (for bread) or 400 (for rolls or buns). Brush with egg wash (one egg, beaten with a bit of water), if desired. You can also top with sesame or poppy seeds if that strikes your fancy. Bake loaves for 35 to 40 minutes, or until golden brown. (A freeform loaf works best if it's baked on a bread stone).

6. Remove the loaves from the oven and transfer to a wire rack. Let cool before eating.
Posted by Marie at 8:31 PM

I can tell from the way you've written this that you really like this bread, so much so that your enthusiasm is very catching! This will be printed off and buttermilk will be on my shopping list this weekend! I wish it had been me walking through your door, I would love to sink my teeth into one of those lovely loaves. Jeannette

The buttermilk bread looks so good! I haven't been checking the bread blog for a while and am behind. You have been very busy.
I like the idea of you giving the burglar your freshly made bread. I am sure he/she would turn over a new loaf...uh, leaf! You would be too nice to steal from.

Melinda,
I worry about you if you don't check in. How's that for putting a burden on you? I find that I get grumpy if I don't have my weekly fix of fresh bread. A friend of mine (?) just suggested to me that I should make a few extra loaves and shellac them so they could be on display at my funeral whenever that might happen to be.

the fermented dough does look so much prettier than when it is just mixed. thanks for the comparison photos! i agree with jeanette, your excitement about the bread shines through in your writing.
you could always mail a loaf of bread to portland! (those would be some interesting before/after photos...)

Oh Marie you do make me laugh! If you should ever decide to write Slash First, Wash Second I will surely read it. Your bread certainly does look very nice and I have no doubt that if it were entered at the state fair you would receive the blue ribbon.

ECL,
I could send you one of the shellacked funeral loaves; that would probably withstand the trip. Of course, I don't have one yet.

Oriana,
Thank you for awarding me the blue ribbon!

looks delicious, but help! how much flour goes into the first and second steps, respectively? both steps direct to add the flour but neither gives a partial measure!

Anon.,
I changed the recipe now to make it clear that all the flour is mixed together in Step 1. Add more only if necessary in Step 2. (It wasn't necessary for me).

Marie, I saw this posting yesterday and had to try it today. What size pan did you use? I used a 9x5 one and my loaf was not as high as yours.
Thank you for posting this recipe. The bread tasted really, really good:)

Anon.,
I also used a 9 x 5 pan, but when I divided the dough, I set aside slightly more for the loaf in the pan than I used for the round loaf. I'm so glad you liked it!

I've made this bread twice and concur, it is easy, delicious and versatile.

A dozen rolls and loaf of poppy seed plus a free-form loaf and a loaf of plain, white sandwich bread. All disappeared quickly.

Before you changed the recipe to reflect the correct flour addition schedule, I made it by eliminating the flour completely in Step 1 and only added it after all the wet ingredients (plus sugar & salt) had been mixed. Easy peasy. I made the second batch with regular yeast (because I grabbed the wrong one) and it turned out just as tasty; took longer to rise but that's the only difference. Thanks for sharing this one.

Anon.,
This is such a non-fussy bread--I think you could add the ingredients in any order, and it would still turn out fine. It really is an excellent bread to know about, and, I may have forgotten to mention that you can make a version without buttermilk, so you don't have to run out and buy some.

I love it when buttermilk's in the house because I love all recipes with it! So many nice things to do. This looks wonderful. And shiny!

Pinknest,
If I remember correctly, you have also been known to suffer from the "must use up the buttermilk" syndrome.

Your enthusiasm for this bread spread right across to the UK and I made it today! I can see why you like it, it was easyish to make, and tastes lovely. the texture is light and went very nice with our evening meal of fillets of salmon with salad. I made two loaves, like you, a round boule and a loaf shaped one. the boule has gone into the freezer, no-one knocked on the door in time for a treat! Nice loaf!
thank you for printing the recipe, Jeannette

Jeannette,
I agree--it's very hard to find anything negative to say about this bread!

Marie, thank you for answering my question re the size of the pan. I made this bread again on Fri and made two loaves. I used two 8 1/2" x 4 1/2" loaf pans. They were the perfect size and height. Thank you again for the recipe.

I'm glad that turned out to be the right size, and I'll keep it in mind if I make two loaves. I can't believe you've already made this bread a second time! Just shows how good it is.

Dear Marie
All bread book authors present a very optimistic opinion about all their formulas (I prefer this expression rather the "recipes"). I find it very useful to turn to you for an independent opinion about breads I am considering making for the first time. Thank you very much for it.

You may consider to add to the formula you are presenting here that it is Variation 2 of Reinhart's White Breads.