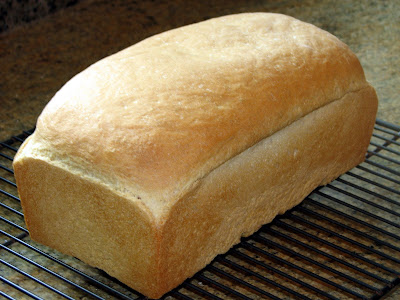 Two weeks ago, I made a semolina bread that was quick, easy, and good, but not quite good enough. I was surprised that the distinctive semolina taste didn't seem as distinctive as in other breads that use a combination of flour. I wanted to see if I could improve a perfectly good bread so that it would be even better. I thought about doing a pre-ferment, but I wanted it still to be a simple bread that I could make in one day.
I decided to add some white bread flour and a small amount of whole wheat pastry flour, just for fun. And then, because I had sourdough starter, I cut down on the yeast amount and added some of that. 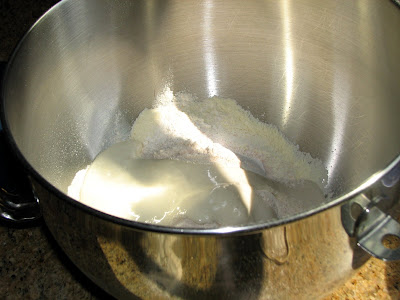 This is not just your ordinary sourdough starter, by the way. This came to me, through a few twists and turns, from the refrigerator of Rose Levy Beranbaum herself. Yes, I have sourdough starter from the Queen of Bread. I have fed it and coddled it, but I hadn't yet put it in bread, so this was its maiden voyage.
If you don't have sourdough starter, then you could just up the yeast amount to the original one tablespoon, and no one would be the wiser.
The semolina flour, plus just the little bit of whole wheat pastry flour that I added, gave the dough a nice golden color. 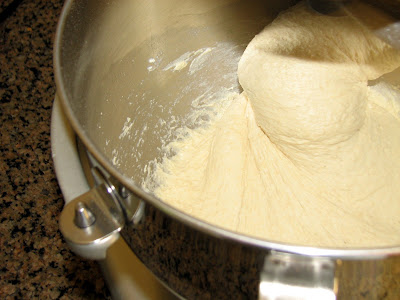 I wish that I could say it was some brilliant flash of insight that made me add the whole wheat pastry flour. What really happened, though, is I was looking through my shelf of flours and saw the pastry flour. I looked for a "use by" date but couldn't find one, although I knew that I had bought it a few years ago I figured that I might as well use a little more before I tossed it, and so I did. Although you wouldn't ordinarily use pastry flour for bread, I thought its softness would be counterbalanced by the bread flour.
The sourdough may have been more active than I thought because, even though I put only about 1/4 cup in the dough, the bread rose faster and higher than I was expecting, and it made a bigger loaf. 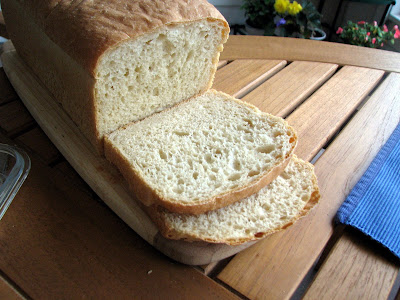 I liked this bread a lot. I preferred both the texture and the ever-so-slightly tangy taste to the original recipe. But that could be just because I wanted to like it more since I'd spent some time figuring out how to improve it. When I asked Jim which one he preferred, he got the deer-in-the-headlights look that means he thinks there is going to be no right answer to this question. "Uh, maybe....about the same?" I looked dissatisfied. He tried again: "I guess I like this one a little better." "Really? Why?" He took another bite, pretending he was deep in thought, and I decided to let him off the hook. 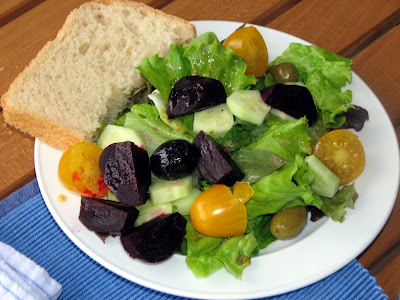 It was a nice accompaniment to the salad made from the things I'd gathered at the Farmers' Market that morning: lettuce, beets, yellow cherry tomatoes, and cucumbers. And the next night, it served as a base for wonderful BLT's, with first-of-the-season tomatoes.
Now I've started my quest for the best semolina bread in the world, and I'll let you know if I find it. Or maybe I already have.

Mix all ingredients in the mixing bowl of a stand mixer.

With the dough hook, knead the bread on medium speed for three to five minutes, or until smooth. If kneading by hand, knead for eight to ten minutes. Spray a bowl with nonstick cooking spray, set the dough in the bowl, and cover with plastic wrap. Let rise until doubled in bulk, about 1 1/2 hours to 2 hours.

Turn dough onto lightly floured counter. Shape into rectangle, and fold, using a business-letter fold. Shape it into a loaf. Place it into a greased 5 x 9-inch bread pan. Cover with a towel and let rise until doubled in bulk, about 50 minutes.

Bake in a preheated 350°F oven for 40 minutes, or until bread is a light golden brown and tests done. Turn the loaf out and let it cool on a rack. Let cool thoroughly before slicing. Makes 1 large loaf.

I am glad you made a semolina bread that met your expectations.
I had a good laugh at Jim's being caught in the headlights look. My husband does this panicked look, too.
I can see his brain cells ticking over.
'What's the right answer, come on... what's the right answer?'
So funny!
Why haven't you used your Rose starter until now, you silly sausage! It's maiden voyage was triumphant.

look at you go, adapting your own recipe!
i'm glad this semolina bread turned out tastier than the first try! you could turn your quest for the perfect semolina bread into The Semolina Bread Bible and become the preeminent authority on the subject.

I'm just wondering whether semolina flour is the same thing as semolina? I ask because, coincidentally ,when out shopping this morning I bought a box of Semolina!
Your loaf looks as good as all the others you make, if not better, it looks light in texture and Jim's photography is great, as usual. Jeannette

Melinda,
I don't know why I haven't used it, honestly. Maybe I was a little scared to touch it. I love adding a little sourdough to bread--I think I like the sourdough/yeast combo better than all sourdough, which is sometimes too sour for my taste.

ECL,
Well, I've always wanted to be the preeminent authority on something, and semolina bread seems as good as anything.

Jeannette,
I actually use durum flour in anything that calls for "semolina" flour because I think that semolina is too coarse. So maybe I should call it gussied-up durum flour bread. Doesn't have the same ring, does it?

Chavi said...
This comment has been removed by the author.
5:58 AM

Hi Marie,
I anxiously await your blog posts!
I recently have had some adventures with semolina flour and have been pleased, mostly, with the results. Try the Semolina Sandwich Loaf from Daniel Leader's Local Breads-- It can be found on the fresh loaf.
Keep it coming

Marie,
All your experience making bread has made you quite the savvy baker, adding a little bit of this and that to make it your own and improve upon. I just love how a little bit of sourdough along with yeast improves the taste. I am glad this loaf was a success for you, it really does look quite good.

Chavi,
Thanks for the tip! I love to find new recipes.

Oriana,
Maybe "savviness" is just the willingness to make a mistake. If you're going to make mistakes, it might as well be in a loaf of bread, because you know that the worst that will happen is that you'll have a loaf of not-so-great bread.