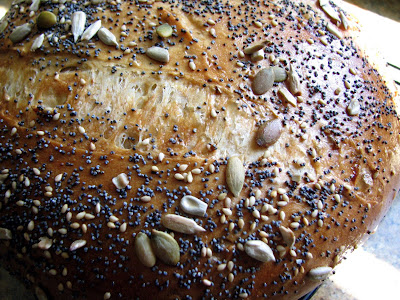 How I love baking bread. It's so satisfying to feel the rightness of the dough with your hands, and to get into the rhythm of mixing/resting/shaping. The cakes have been a real adventure, and have pushed me beyond my comfort level. It's good to be pushed, but it's also good to return to what feels comfortable and right.
My blog (and now in-person) friend Jini has been telling me about this bread for months, and finally she sent me the recipe. When she did, I realized it came from a cookbook I already own: Savoring the Seasons of the Northern Heartland, by Beth Dooley and Lucia Watson, the owner and chef of fabulous local restaurant, Lucia's. 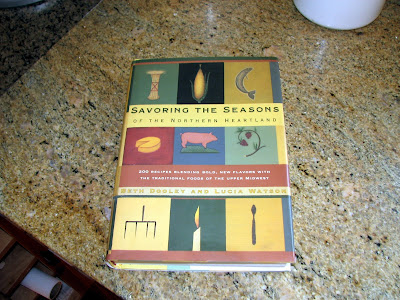 When I bought this cookbook, well over ten years ago, I didn't pay attention to its chapter on breads, because I didn't bake bread at the time. It's a very down-home cookbook, heavily influenced by the immigrant German, Scandinavian, and eastern Europeans who populated Minnesota, Wisconsin, and the Dakotas. The bread chapter contains, for example, recipes for Saint Lucia buns, kolachke, Norwegian toast, and Finnish cardamom coffee bread. This first recipe, Dakota bread, has made me want to return and try more.
The Dakota bread is from a St. Paul institution, Cafe Latte, a cafeteria/bakery/coffee shop/wine bar, that's especially well-known for its breads and cakes. This bread is a customer favorite, and for good reason: it's soft and light, but every bite has a different combination of crunch and taste because it's got four different seeds: sunflower, poppy, pumpkin, and sesame, as well as cracked wheat. 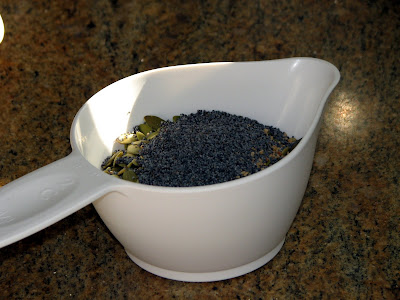 Even with all the nuts, the dough is very easy to work with. I usually prefer breads with small amounts of yeast and long fermenting times, but this one has two tablespoons of yeast and requires an initial rise of only one hour, then a rest. 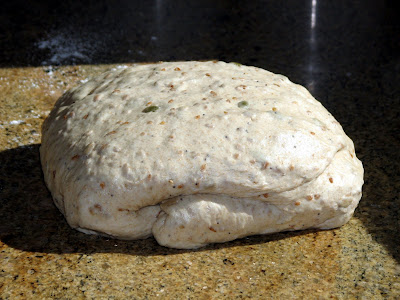 After the dough is shaped into two loaves, it takes just a half-hour or so to rise again. It's nice to have a bread in your repertoire that comes together this quickly and easily and can be ready in time for lunch.
I made one loaf in a banetton 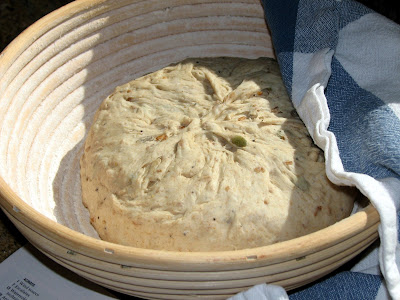 and one free-form boule. 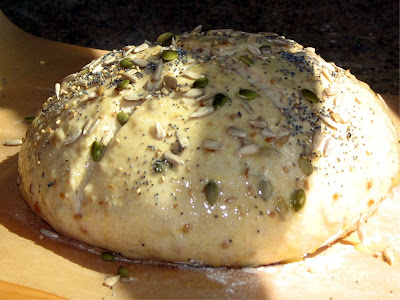 They looked stunning coming out of the oven because of the shininess of the egg wash and the seeds scattered on top. I followed the recipe exactly, and I liked this combination of seeds, but you could vary them depending on what you have and what you like. Flaxseed would also be good. 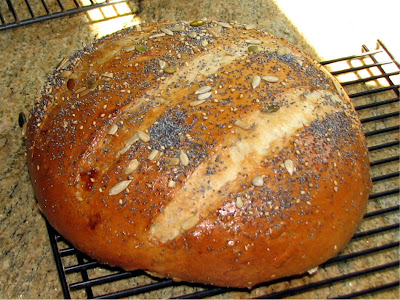 It has a nice, even crumb. We ate it plain, with a little butter, this afternoon, but it looks like it will also be good for toast and an excellent sandwich bread. Jini also uses this recipe to make rolls, and I think they'd make perfect hamburger buns as well. 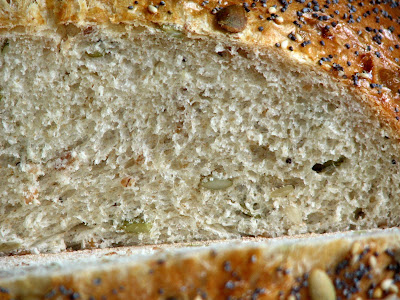 DAKOTA BREAD
--from Savoring the Seasons of the Northern
Heartland, by Beth Dooley & Lucia Watson.

In a large bowl, combine the water, yeast, honey, oil, and cracked
wheat and allow to proof about 5 to 10 minutes, or until the yeast is
light and bubbly. Add the salt, whole wheat and white flours, and
stir to combine.

Knead by hand, or, using a dough hook, knead in a stand mixer for five to ten minutes, until the dough is smooth and elastic.
Mix the seeds together and sprinkle them over the dough, reserving a
few tablespoons to sprinkle over the loaves before baking. Then knead
the seeds into the dough. (If you use the stand mixer, finish kneading by hand for a minute).
Turn the dough into a greased bowl, cover with a towel, and allow the dough to rise
until double in bulk, about 1 hour. Press the dough into a rectangle and give it a business-letter turn. Let it rest for 5 minutes.
Place baking stone on rack in lower third of oven, and preheat oven to 375 degrees Fahrenheit
Divide the dough and shape it into two round loaves on lightly floured parchment paper. Let rise 25 to 30 minutes. Brush the loaves with a beaten egg and
sprinkle on any remaining seeds. Slash the tops of the loaves with a razor blade or sharp knife.
Carefully place the loaves, still on parchment, on the baking stone. Add steam by spritzing water in the oven, putting ice cubes on a preheated pan, or adding about a half-cup boiling water in a preheated pan.
Bake for about 30 to 40 minutes, or until the loaves are
nicely browned and sound hollow when tapped.
Remove the loaves from the oven and cool on wire racks.
Posted by Marie at 4:31 PM

Oh, it does look good! Jim's pictures are especially nice, too. That bread posed and pouted for him like a supermodel.

Show us some seeds, baby!

You two are hilarious!

It does look really good, and Jim got some great shots. Nice closeups!

ECL,
I liked the closeups too--sometimes they're just blurry, but this time it really worked. This is an easy bread to make--next time you want to try bread again, and it's very granola-girl.

granola-girl, tree hugger whatever, i love this bread. the seeds are particularly yummy and they are all through the bread as well as shiny and lovely on top. i will say that the first time i made it, i didn't have a kitchenaid and i kneaded and kneaded and kneaded some more to get the seeds worked in and throughout the dough.
i am writing from berkeley where we are in wait mode. ecl, i have "the birth partner" with me as a support system.

Oh that bread looks so good I wanted to make it right away but I haven't got cracked wheat in my cupboard so I'll have to wait till I go shopping. Pictures as usual are very good, please tell Jim he is appreciated as an excellent photographer! Jeannette

Marie
As soon I as saw the execellent photo of the bread and before I started reading I thought 'now that's my kind of bread.' Thank you for posting the recipe as I was ready to go and get the book. I haven't made a seeded bread in a awhile and this one looks really nice.

Jini,
I'm glad that you got a chance to read this, but I was hoping you'd write in with a baby announcement! Thanks for the recipe--you're right, it's a good bread.

Jeannette,
You could probably make it without the cracked wheat, but I hate to test a recipe without using all the ingredients.

Oriana,
According to the cookbook, this is Cafe Latte's most popular bread, so it must be a lot of people's kind of bread! I can't think who wouldn't like it--except people who don't like seeds.

Oh my word what a beautiful bread, it looks delicious!

i baked this last night and it's fantastic. thanks so much for sharing the recipe! i'll be using it again.

Jenni,
Thanks for letting me know--I love it when people try the recipes and they work out for them.

wow, that is some perfectly shaped bread!!! it's so wonderful looking.

Pinknest,
I think it's hard to mess up this bread. It seems to want to be agreeable--an admirable trait.

finally finally an announcement. siena arrived last evening @8:23 pst, and is amazingly adorable. what a cool experience to be there for the whole thing. :)

Jini,
Congratulations to all! (I have such grandmother envy).

it will happen to you marie. i have pictures to show you. :)

Any idea about yields, cooking times and temps for making rolls with this dough?

I will! In the meantime, I made a regular loaf and it came out beautifully. Pics are up on my blog. Thanks!