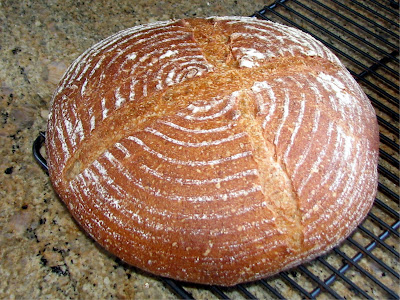 I'm kind of a sucker for anything called "rustic" or "peasant." It makes me feel better than eating something named "aristocratic" or "royal." Both Jim and I are from peasant stock as far back as we know about, and I'd feel silly trying to claim to be an aristocrat. Although I'll admit that I used to have fantasies about meeting a British lord and being swept off my feet by him. Then I read enough novels to realize that I had nothing to offer said British lord, so I gave up on that daydream.
But I wonder if there isn't some hungry British lord somewhere who would be say "Oh my darling, I care not for a dowry as long as you make me such wonderful bread." Probably not. Fortunately, when he first met me, Jim cared not about my dowry.
As usual, my good angel ("Eat more fiber! Eat whole grains!") was at war with my bad angel ("Why do you think people switched to white flour? Because it tastes better."). So I compromised with rustic bread which has some white, some rye, and some whole wheat.
As with most of Hamelman's breads, this one is a two-day process because it requires a pre-ferment that sits overnight. When you look at it in the morning, it's nice and bubbly, with a pleasantly yeasty smell. The pre-ferment (all white bread flour) gets thrown into the mixer in blobs after the final dough (made with all three flours) has started to coalesce. 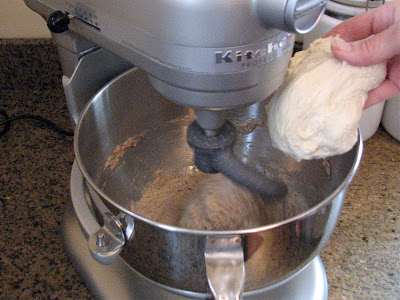 Tossing these blobs into the dough while the KitchenAid was running was my favorite part of making this bread. I think it's because it seems like something you shouldn't do. I was a very obedient child, so it doesn't take much to make me feel like I'm doing something daring and possibly even illegal.
After all that fun, there wasn't much else left to do except fold the bread twice. (Jeffrey Hamelman is very big on folding dough). 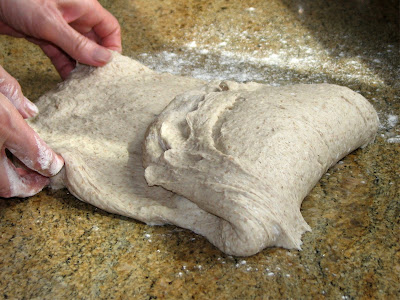 Then the loaves are shaped and left to rise again. I used my bannetons again, which I love because they make such professional-looking bread. 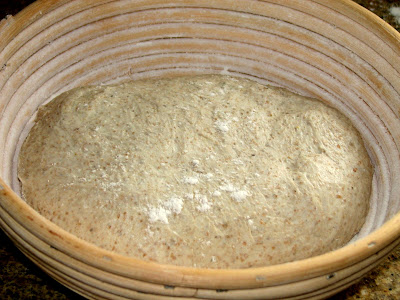 During this rising, Jim and I made a quick trip to Smith & Hawken to look at their garden furniture, which was all 30% off. The trip took longer than I thought it would, and I was worried that the dough was going to be a sunken mess by the time I got home, but it still looked hale and hearty. It probably survived because my kitchen is still cold because it's still snowing in the far northland even though it's April.
A friend and neighbor of ours just came home from the hospital after surgery, so I wanted to bring her some bread, and I made chicken soup with asparagus, snowpeas, orzo and tarragon, and also Dorie Greenspan's apple bars with brown sugar-butter glaze. But for some reason I forgot to take pictures of either the soup or the apple bars, even though they were both quite successful. I do have lots of pictures of the patterns the flour makes on the bread, e.g., 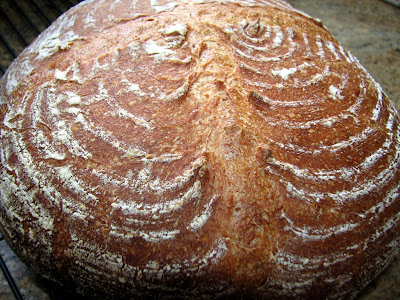 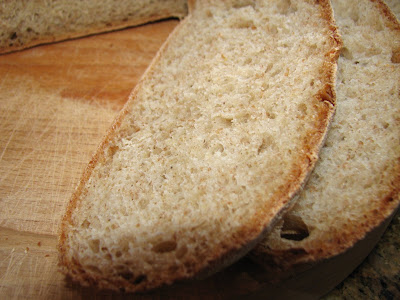 I'm going to give the recipe pretty much as written, but let me tell you that the first 100 or so pages of Hamelman's book are complete, detailed instructions of the various stages of bread-making, so if you really want to understand what's going on, you may want to pick up a copy of his book from the library and check it out.

1. Disperse the yeast in the water, add the flour and salt, and mix until smooth. Cover the bowl with plastic wrap and let stand for 12 to 16 hours.

2. The next day, add all the remaining ingredients to the mixing bowl, except the pre-ferment. Mix on first speed of a mixer for 3 minutes until dough is formed. As the dough is coming together, add the pre-ferment in chunks. Finish mixing on second speed for about 2 1/2 minutes. The dough should be supple and moderately loose.

3. Let dough rise for about 2 1/2 hours, folding it twice during that time, once after 50 minutes and again 50 minutes later.

7. Preheat oven to 450F. Invert loaves on peel. Slash with a blade. Presteam the oven, load the bread, and steam again. Bake for 35-38 minutes.

Looks great. Oddly enough, I just made this same bread this weekend and just posted it. I didn't have rye so I doubled the WW. It was quite good, but I can only imagine how nice it would have been with the rye. It was the first bread I baked after a grueling 6 weeks with no oven.

You are so good at making bread! When I looked at that slice all I could think of was how I would have loved to have some nice hearty hot soup to dip it into. Wonderful!!

Ethan,
Your rustic bread looks fantastic--the rye flour was nice, but I don't think it was necessary. What a relief to get your oven back! It would be very hard to go that long without an oven.

Thanks, Bunny,
You're right--it was a perfect bread for soup.

The bread looks great! Where did you get your proofing baskets? I love the effect they have, but I have never seen any that I thought were reasonably priced.

Tom,
Both were gifts. I could never bring myself to buy them because they seemed so overpriced, but I had them on my wish list for a long time and finally got them. I think one was from Amazon.com and the other from Williams-Sonoma. I've seen them occasionally on E-Bay for a decent price.

i commend you on baking "healthy", not white flour bread. it looks beautiful and probably was deliciously healthy as well. i didn't know about this british lord dream, but i suspect he is still awaiting your loaves. :)
on the other hand, jim is able to fight off the competition quite handily and with less stuffiness.

Your bread looks good as usual, and I too love the patterns your bannetons make on the bread. I must get some one day, or put them on a present list like you did! Jeannette

Jini,
I'll probably go back and forth between good-for-you and just good. But I'll admit this bread was good. I do think that there are times when Jim would be quite happy to get me off his hands.

Jeannette,
Thanks. Here's another way to think about it: just amortize the cost of a banneton over the years. If they cost, say, $30, once you've used it 30 times, that's just $100 a loaf. And after you've used it 60 times, a mere 50 cents. I justify buying many things this way, and then somehow forget to count how many times I've used them.

I must be of less-than-peasant stock, because I first heard of bannetons on your blog, Marie. I went to look them up at Amazon just now, and my question is: how do you clean them? Don't they get a bit, um, gummy after a few uses? I absolutely love how the bread looks.

Jenny,
Oddly, they don't get gummy at all. You flour them and the dough doesn't stick to them. (I don't think they'd work well with an extremely wet dough).

Marie, I am also a sucker for anything labeled rustic or peasant. This loaf looks lovely. If I ever have to recover from surgery I'd like to do it near you so you can bring me delicious homemade food too! I hope your neighbor is feeling better.

Marie, never, no way, not for an instant!

Yay for peasant bread! I, too, can't do the supercilious. Rustic all the way. I love your banneton, I want one too!

ECL,
Thanks, she's doing well. If you ever have to recover from surgery, I'll see if I can air lift some bread to you.

Natashya,
If I were president, my motto would be, "A banneton for every oven." But that might not get me very far.

Katy,
Me too. Thanks!

I too am drawn to any bread recipe that is described as rustic or peasant. Isn't it funny how these simple peasant breads and meals have come into vogue. Like polenta for example; having parents from northern Italy I grew up having the humble polenta regularly and now you find it at posh restaurants served with say short ribs or osso buoco and command prices that are hardly peasant. Your bread looks so delicious with those beautiful rings of flour left by the banneton. I finally ordered my banneton from the internet. Yes, it was pricey but I just had to bite the bullet because it was high on my must haves and I do like it very much.

Oriana,
Polenta is a perfect example of peasant gone chic. I used to see breads shaped in bannetons and I had no idea how it was done; I thought it required some great dexterity to make the designs. That's why, when I realized how it was done, that I had to have it. I like it too.

Your bread looks delicious and very healing. I hope your neighbor is better now.
The bread has a nice looking texture to it, too. I don't think this went over in a brown paper bag and cut up secretly in the kitchen!
I love the banneton rings too. They do make the bread look uppity and difficult to do...almost regal!

Melinda,
Ha. You remember everything. It never entered a brown paper bag; it was borne proudly.

Just tried this recipe. Thanks for the clear instructions. I really enjoyed the bake.

A couple of observations on my bake:

1) The crust was fantastic and the bread really chewy (in a nice way).

2) I had a problem with the bread which was slightly wet. I assume this was a baking issue. I intend to try the again but with slightly less water and with an oven thermometer. Anything else I should look out for?

Further to my comment above; I put cold water in a tray at oven bottom for steam to develop crust. I did this at start of bake and later on. Perhaps I overdid it and lowered the temperature too much and thus did not allow enough time for the bake?