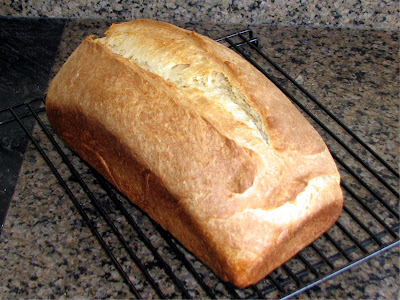 I've been thinking with great nostalgia lately about opening Rose's Bread Bible for the first time, and making my first successful bread, which was actually my second attempt. All the nostalgia made me want to go back and make a bread I've already made instead of trying another new one, so I just opened the book at random and happened on Ricotta Loaf. I remembered loving that bread the first time I made it, so I was happy. Then I remembered that Rose's blog has a recipe for Ricotta Bliss, which she says is the ricotta loaf perfected, and I remembered that that version was awfully good too. I dithered around for a while trying to decide whether I should make the original, perhaps slightly inferior, loaf or the new, improved one. I settled on the loaf from the book, which was actually even better than I remembered.
It's one of the easier breads in the cookbooks and one of the quickest to mix up. You put everything in the food processor except the water, pulse it a few times, add the water, and then process for about a minute. I suppose a bread machine is easier, but it couldn't be much easier. The dough is lovely, smooth, and supple. It looks rich because of the egg and butter, and I guess it is (for the same reasons), but the ricotta makes me think it's actually a very healthy bread. 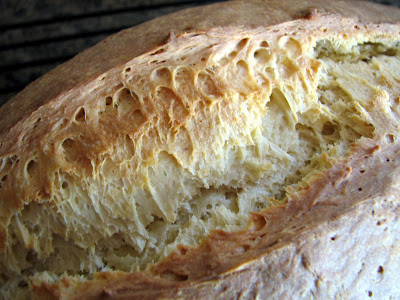 Even though it's made in a loaf pan, you get to slash it down the middle, which I love to do. And Jim loves to take pictures of the result, so it's a win-win situation. I suppose I could always do it with every bread that I bake, but I don't unless there are explicit instructions to do so.
Once the bread is done, you have the option of brushing it with melted butter. I didn't, because I was telling myself it was a very healthful loaf of bread and the melted butter might have required me to abandon that illusion. 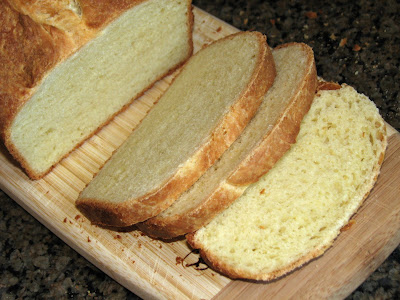 What a lovely mid-afternoon treat this turned out to be! I had mine with lemon curd--because it's a fruit, you know. Jim had his with butter. I hope he doesn't go to hell, on account of being so much less virtuous than I am.

1. Put flour, sugar, yeast, ricotta, butter, egg, and salt in bowl of food processor and pulse about 15 times. With the motor running, add the cold water. Process for about one minute.

2. Put dough in lightly greased bowl and cover with plastic wrap. Allow to rise until doubled, 1 1/2 to 2 hours.

3. An hour before baking, preheat oven to 375. If you have a baking stone, preheat that at the same time, and preheat a cast-iron skillet or baking pan on the lowest shelf of the oven.

4. Shape the dough into a loaf and place it in an oiled or buttered 9" by 5" loaf pan. Cover the dough loosely with oiled plastic wrap and allow it to rise until almost doubled, about 45 minutes to one hour and 15 minutes.

5. With a sharp knife or razor blade, make a long 1/2-inch slash down the middle of the bread. Mist the dough with water and set the pan on the preheated baking stone. Add 1/2 cup ice cubes into the pan on the bottom shelf and close oven door.

6. Bake 40 to 50 minutes. Turn bread around about halfway through baking for more even browning. If bread is getting too brown on top, drape a piece of foil loosely on the top.

7. Unmold bread and place on wire rack. Brush with melted butter if desired. Let cool before slicing.
Posted by Marie at 11:56 AM

It is a handsome loaf and looks delicious.
I am going to be with Jim. Going to hell in a bread basket with a generous slab of butter all over it.

Melinda,
If there were a corner in hell where you just sat around and ate bread (toast?) with butter slathered over it, I guess I'd be there.

Thanks for the memories--I, too, love RLB's Bread Bible, but haven't cooked from it for a while--and I've never made this one. I think I'll go mix it up before I head out to the garden this morning. What a delight this will be tonight! Again, thank you for the inspiration.

Marie,
The great pictures of this bread look mouth watering. I will have to add this recipe to one I must make.

Another lovely loaf for me to try!
Jeannette

I would never think ricotta would be a good addition to bread, but this proves otherwise. I think I might have to get RLB's Bread Bible soon!

Bread Baker,
Lucky you--you must live somewhere where going out to work in the garden at the end of March is a possibility! Here, the ground is still frozen. I love it when I come across something I've kind of forgotten about, and then get reminded of it. Hope you enjoy the bread!

Oriana,
A "to-do list" that only includes breads to make sometime in the future is so much nicer than the kind of to-do list that just has a list of chores!

Jeannette,
Yes, and this really is an easy one.

ECL,
I'm so glad that you're not off bread baking after I made you bake something from Bread. But you know you can always count on Rose.

virtue be damned.....jim won't go to hell as long as he takes such lovely photos. :)

Thanks, Jini. I need all the help I can get.

I found you through Natashya's blogroll. Love your bread! I just made the bliss version in a loaf pan, using half white whole wheat. What a lovely recipe. I'd need to go with butter and take a chance that I'd end in the hot place.
Nancy

hey marie! was just checking this blog to make sure you weren't away and wouldn't get the e-mail i sent you and found this fantastic posting plus the delightful one after it. being buried in cake for the new book i lost touch with everything and almost forgot how addicted i have become to your inimicable postings!

Nancy,
Have you ever made the ricotta bread with all white flour? I'm very curious about how it would compare with the one made with half white whole wheat. It's so deliciously tender as is, and I'd be concerned that the whole wheat might take that tenderness away.

Rose,
Got your email and responded. I hope you can come out of new-cookbook hiding soon! Great to hear from you.