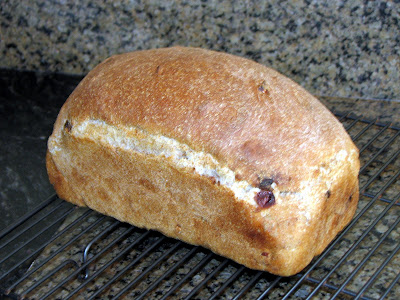 It was my turn this month to choose the project for the Lazy Bakers. Even though we have no rules, we do sort of try to take turns. I guess that's okay--it's not the Anarchists' Baking Club, after all. Naturally, I chose bread. I wanted something from one of the new cookbooks I got for Christmas, and something that wasn't so long and complicated that it wouldn't be fun. I was looking for something at least moderately healthy. And finally, of course, I wanted something that tasted good. I had high hopes for this bread from the beginning. It's half whole-wheat flour, which satisfies my "healthy" criterion, with enough white flour to balance out the heavyness and the slightly bitter taste you get with all whole wheat and with raisins for sweetness and nuts for crunch, protein, and antioxidants. It's from Jeffrey Hamelman's Bread cookbook. (Hamelman is the Director of the Baking Education Center for King Arthur Flour, and he does seem to know a thing or two about bread).
The dough--half and half whole wheat and bread flour, yeast, salt, and water--was thick enough to to make the KitchenAid groan, but not so thick that I couldn't handle it (like the Norwegian bread, which resisted all efforts to shape it). 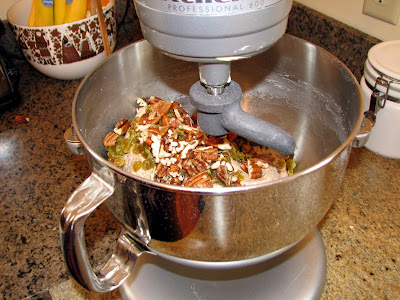 Even though it didn't sound completely, the mixer made it just fine through the final step, mixing in the pecans and golden raisins. I think it will live to make bread again.
I don't think we had golden raisins when I was growing up. I think that whoever named them "golden" was a clever marketer. I believe they're just dried green grapes, but "green raisins" doesn't sound nearly as pretty as "golden." Even "yellow raisins" doesn't work. And have you noticed that those same marketers are trying to turn prunes into "dried plums"? Maybe they should just try making "golden prunes" and see how that works out.
But back to the bread. 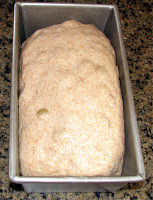 This recipe makes two loaves of bread, which I was very happy about because I finally got another 8 1/2 x 4-inch loaf pan, so I could make two loaves of bread that were the same size. I was unreasonably excited about this.
The lumps in the bread dough aren't big air holes, by the way; they're the pecans and raisins, of which this bread is chock-full. (After I wrote this sentence, I realized I didn't know where the expression "chock-full" came from, so I had to look it up. Chock is a variant of "choke," so it means full to the point of choking. This information makes the phrase "chock-full" seem not as homey and comfortable as it did before, but I'm glad to report that no one has choked on this bread--so far at least).
Really, fellow Lazy Bakers, there are no pitfalls in this recipe that I'm aware of. It turned out just as I hoped--a lovely, slightly sweet and nutty bread filled with nutrients. You have to find an excuse for eating scones, but you can eat this bread with a clear conscience. 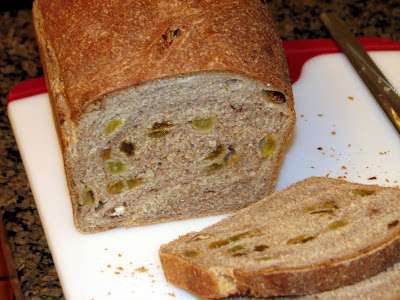 WHOLE WHEAT BREAD WITH PECANS AND GOLDEN RAISINS
--from Bread, by Jeffrey Hamelman

1. About 30 minutes before starting, pour warm water over the golden raisins and let them sit for up to 30 minutes to soften. Drain the rains well.

2. MIXING: Add all the ingredients except the rains and pecans to mixing bowl. Mix on low speed for 3 minutes (using dough hook if you have a KitchenAid) to incorporate the ingredients thoroughly. The dough consistency should be moderately loose. Turn the mixer to the second speed and mix for about 3 minutes more. Add the drained raisins and pecans (the recipe doesn't say whether they should be chopped, so do whatever you want). Mix on low speed, just until the rains and nuts are thoroughly incorporated.

3. BULK FERMENTATION: Put in large bowl and cover with plastic wrap. Let rise for about two hours. If it's more convenient, you can put the dough in the refrigerator and let it rise overnight.

4. FOLDING: After the dough has been rising for about an hour, take it out of the bowl and put it on a lightly floured work surface, pat it out it into a rectangle, and fold it, as if you're folding a business letter, in thirds, and put back into the bowl.

5. DIVIDING AND SHAPING: The dough can be put into loaf pans or you can make it free-form into a round or oblong shape. Divide the dough into half, and place the dough pieces on a lightly floured work surface. Cover the rounds with plastic and let rest 10 to 20 minutes, until relaxed. Shape into a blunt cylinder just slightly smaller than the loaf pans if you're using the pans. Otherwise, shape into round or oblong shape.

6. SECOND RISING: Cover loaves with oiled plastic wrap or with cotton or linen towel and let rise for another 1 to 1 1/2 hour.

7. BAKING: Preheat oven to 450. If you have a baking stone, put that in the oven and preheat it too. Put the loaf pans on the preheated stone, or on the oven rack if you're not using the stone. Lower the temperature to 425 after 20 minutes. Bread baked in the loaf pans will take 30 to 35 minutes to bake. Loaves baked freeform will take about 40 minutes.


Note on steam: The bread will develop a better crust if you inject some steam into the process. The easiest ways to do this are 1) Preheat a cookie sheet or cast-iron pan on the lowest shelf of the oven. Put about 1/2 cup of ice cubes on the heated sheet or pan when you put the bread in the oven; 2) pour about 1/2 cup of boiling water into a cookie sheet or cast iron pan when you put the bread in the oven; or 3) mist the bread and oven with water from a spray mister when you put it in the oven. Or if you don't want to bother with a steam contraption, you can forget about it and the bread should still be perfectly fine.
Posted by Marie at 7:57 PM

Marie,
This looks like a really great bread. I really enjoy making breads that have fruit and nuts in them so thank you for posting the recipe. I will be trying this one very soon.
Oriana

Nice to see your loaves before I embark on mine! This all looks pretty straight-forward (famous last words! ) so i shall be doing mine quite soon, I love fruit breads and nuts just make it even better. There is a Welsh bread called Bara Brith, meaning Speckled Bread, which is kind of similar, but it has added spices as well, perhaps when it comes my turn to choose I should put that forward. Just a thought! I hope you enjoyed your loaves.
Jeannette/

Oriana,
Oh, do try it--if you like breads with fruit and nuts, you'll definitely like this one. I wish you were my neighbor too. Of course, you're always invited to stop by, but it would be a bit of a trek on Saturday morning.

Jeannette,
I would like to try Bara Brith! I really enjoy finding out about (and eating) breads that are staples in other countries.

My Kitchen Aid broke down just after Christmas. I am very upset over having to send it in for repair. It sounds like the motor lost a few bearings. It is has only just turned 2 years old.

I guess I will have to hand mix this one. It looks lovely and the texture on your loaf looks perfect. I am glad to know you have 2 matching loaf tins.
Regarding your choking...what was the name of the bread to choke the priest or to get him to stop eating so much? (I am sure it was you that made this bread!)
I hope to do my bake in the next week. I have looked all over for Golden Raisins. I can only find sultanas, which are white grape raisins. I am thinking they will have to do.
Hey Jeannette...I love Bara Brith.

Melinda,
I'm so sorry about your KitchenAid! Remember when mine broke down? It was very traumatic.
Clearly, England does not have the same aggressive advertisers as the U.S. does--from what I've read, golden raisins are the same as Sultanas, only nobody thought to call them "golden."
It was a pasta to choke the priest--called strozzapreti. I believe that I wandered off the subject at hand when I started musing about strozzapreti.

I've been remiss in never stopping to tell you how much I enjoy your website and how much I appreciate the effort you put into the posts.

Your reader who is substituting sultanas should be jumping for joy because sultanas are a different grape variety and are much superior IMO to the golden raisins marketed in the US.

Thanks again for the wonderful website (and thanks to your photographer husband).

Wow, I had no idea there was so much about a dried grape to learn!
Marie, I hope that when I make this bread my two loaves look half as good as yours. Thanks for considering our health when picking out this project. A break from cakes and cookies is a good thing!
Melinda, I am so sorry your KitchenAid broke down. I hope it gets all fixed up good as new, and in a hurry.
Jeannette, Bara Brith sounds fantastic. I would love to try baking it should you recommend it for a project!

Maura,
Thanks for your note. I appreciate the info about raisins--the dark and golden raisins do taste different (to my palate, anyway), and I would have sworn that they were from different varieties of grapes. Melinda, I hope you're jumping for joy!

ECL,
I think your loaves will turn out beautifully. I agree; I didn't know there was much to learn about dried grapes, but, after all, this is the fruit that brings us wine, and there's plenty to learn about wine.

I like the idea of calling them golden prunes. I will eat pretty much anything regardless of name, but for the faint of heart it would sound delightful.

Just found your blog and I think you are doing an amazing job. It makes me want to bake some bread and stuff it in my face.

of course your bread looks like perfection! mine will look like...a rhombus.