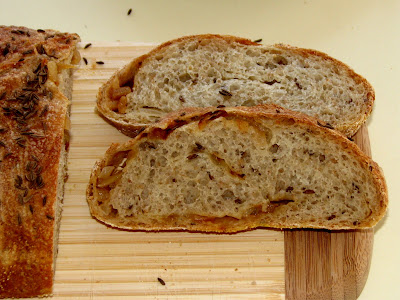 This is the best bread I've made so far from Artisan Bread in Five Minutes a Day--mostly, I think, because it has a layer of caramelized Vidalia onions in it. Caramelized onions improve almost everything, except maybe ice cream. I hadn't decided what bread to make this week, when a friend asked me on Saturday if I'd ever made onion rye bread. I had to admit that I hadn't.
When I was leafing through cookbooks later that day, I saw that Artisan Baking had a recipe for onion rye, so it seemed fated that I should make it.
This bread follows the standard Artisan procedure of mixing a large amount of dough, letting it rise for a few hours, and then putting most of it away for later.
For the onion rye, you use the amount for one loaf, roll it out into an oval, cover with caramelized onions, and roll up, jelly-roll style.
This would have turned out to be a handsome loaf of bread, except that I had a brain lapse that made me roll it up on the counter instead of on a parchment-lined baking sheet. It had already risen beautifully when I came to the realization that no matter how carefully I tried to lift it and place it on the pan, it was going to collapse. And I was right. So instead of the high and handsome loaf I was anticipating, I had a squat and dumpy one. And that's why there is no photo of the whole loaf. Even the squad and dumpy loaf tasted excellent, though, and the bonus is that I have two loaves of rye bread in the refrigerator just waiting to be shaped.
Posted by Marie at 5:37 PM

well, disaster aside, i am glad the bread was still excellent!

Caramelized onion bread sounds so good to have with cheese.
It looks just fine and dandy, Marie.

I suppose Heston Blumenthal would be the only person who could make a caramelized ice cream taste out of this world delicious!

it really does look lovely marie. i haven't tried anything out of the ordinary from that book.
i DID make some cafe latte dakota bread from a recipe i found on-line and it was fantastic! :)

ECL,
On the off chance that nothing is too weird to have been tried at least once, I googled "caramelized onion ice cream," and got six hits--including a recipe for caramelized onion & goat cheese ice cream. I'm still not convinced!

Melinda,
How come I don't know who Heston Blumenthal is? Aha! Isn't Google wonderful? I now know, and I have to say that I think caramelized onion ice cream sounds better than bacon and egg ice cream.

Jini,
That sounds good. I don't know when I'm going to have a chance to bake again, my schedule has become so crazy, but I'm going to google the cafe latte dakota bread recipe and try it soon.

Hi Marie!
So exciting to read about cooking for Rose!

When I first read about the 5 Minute Artisan Bread book I decided I could live without it. I've been baking Jim Lahey's No-Knead recipe (a la Rose's baby no-knead), supplemented with my own sourdough starter, as our daily bread. With this adjustment and a little more salt it gets raves. I am intrigued with the carmelized onion recipe you blogged about. Might I have to re-think it?

Joan,
The caramelized onion rye is really a good concept, but I don't think you have to buy the book to do it--any rye bread recipe would do. Just roll it out, spread it with onion (about one medium) that you've caramelized in olive oil, roll it up, shape it into a batard, and bake. I think you'd have no problem converting the no-knead recipe to caraway rye, but it's so wet I don't think you could roll it out and shape it.

Dear Marie,
Thanks for responding to my comment. I love reading your blog. Thanks for the tips on the onion rye.

I hate buying a cookbook because of a recipe and finding that the recipe that attracted me is the only keeper! I discovered that the Artisan Bread book is in my library system so I will check it out.

I did buy Peter Reinhart’s Whole Grain book and I love it. I am happy to say that I am making progress on what I think of as my own version whole grain heaven.
joan

Joan,
I was so interested to hear that you loved Peter Reinhart's new book--I've only tasted one bread from it, and I thought it was very tasty but also quite heavy, so I had mentally crossed it off my list of books to try. Now that I hear you've had such good luck, I may have to reconsider. I agree--the library is a wonderful resource to try out a few recipes to committing to another cookbook.

One of my blog readers just sent me to your blog when I jokingly said I might set out on a project to bake all of Rose's breads :) What a wealth of information! Thank you for your great pictures and notes. I am new to bread baking, and find your experiments fascinating and extremely helpful. I am sure I'll have a ton of bread questions for you soon, but I thought I'll write to say hi first.

So Marie, inquiring minds want to know. It is now April 29. Have you made any more loaves from your master recipe of Artisan rye and how does it taste?
joan
PS I just picked up a copy of the book from the library. Have you tried it without the carmelized onions?

Joan,
There is no more rye bread dough in my refrigerator! I made one boule-shaped loaf and one torpedo-shaped loaf, but neither one got photographed. I served the torpedo-shaped loaf at a party, sliced thin, with smoked salmon, mascarpone, chopped Vidalia onions, and capers. One guest--who's particularly found of caraway rye--asked if I could arrange to deliver a loaf of the bread to him twice a week. I thought it was quite good, but not as good as the caraway rye recipes in The Bread Bible. I thought the caramelized onions made it exceptional.

Hi Marie
Your Onion Rye Bread looks delicious. In January Cook's Illustrated featured three Almost No-knead Bread recipes and one of them was a Caraway Rye. Thought you and blogger jpsams might be interested.

Helen,
Lucky you--to have all those wonderful breads waiting to be baked! Thanks for writing.

Doughadear,
Thank you for reminding me--I made
Cook's Almost NKB a few months ago (and I thought it was better than the original), but I totally forgot that there was a caraway rye version. I'll have to try to dig out my copy of the magazine.

onion rye just like this is fairly common in ny and the shape you describe as "fat and dumpy" is exactly how it looked where i grew up!